The Adventure of Father Evangelos: A snowy story for Christmas 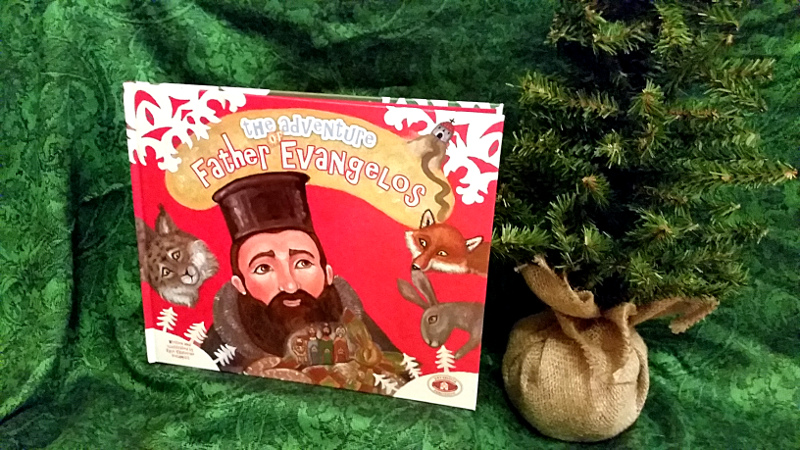 If you can find a copy of The Adventure of Father Evangelos, it may be just the book to put under the tree for a little one. It’s a bright, happy, colorful book, full of snow-covered evergreen trees and helpful animals. And the adventure all happens on one Christmas Eve.

And, as a special favor, he asks Father Evangelos to take his Nativity set, and put it under the Christmas tree at the church in the Upper Village. It would make the children there happy.

Father Evangelos, of course, agrees to go. He leaves his wife and children at home, and sets out on the snowy, icy roads.

And before he gets to the Upper Village, he gets stuck. Completely, totally stuck. He can’t continue on the road. What can he do? He takes up the bundle that contains the Nativity set, and he sets out to walk the rest of the way.

As he tries to find his way through the snow-filled forest, he doesn’t notice pieces of the Nativity set falling from his bundle. But the forest animals notice.

What can he do? He prays. And a huge, bright star appears in the sky over him. The star leads the forest animals to him. They bring him all of the pieces of the Nativity set. And the star lights his way to church.

Egle-Ekaterine Potamitis is both author and illustrator of The Adventure of Father Evangelos. Her art is simply bursting with Christmas joy. The illustrations fill every page, and there’s a lot to see in every picture.

The story starts at lunch time – you can see Father Evangelos’s wife setting food on the table in the first story spread, and the clock on the wall shows that it’s just after noon. And you can see the long winding road to the church in the Upper Village.

And there’s no mention in the story of the animals that find the pieces of the Nativity set and bring them to Father Evangelos. That part of the story is told entirely in the pictures.

Because the pictures carry so much of the story, The Adventure of Father Evangelos is a wonderful lap book for little ones. As you read the story to them, you can point out the details in the pictures. They can look for pieces of the Nativity set, and the animals, and the other joyful details.

And you can talk about the star that led Father Evangelos to the church, just as another star once led wise men to see Jesus.

Unfortunately, The Adventure of Father Evangelos appears to be out of print. Copies are hard to find, and they can be pricey. Which is a real shame, because there are so few Christmas picture books that feature Orthodox Christians. Honestly, I know of only three that are in print: The Saint Nicholas Day Snow, Sweet Song, and The Miracle of St. Nicholas. If you can’t find The Adventure of Father Evangelos, one of those could go under your tree instead.

Five tips for a merrier Christmas: The holidays can be stressful, that’s for sure. These five tips will reduce the stress.