Arabella: A sailboat, a storm, and a grandfather’s love 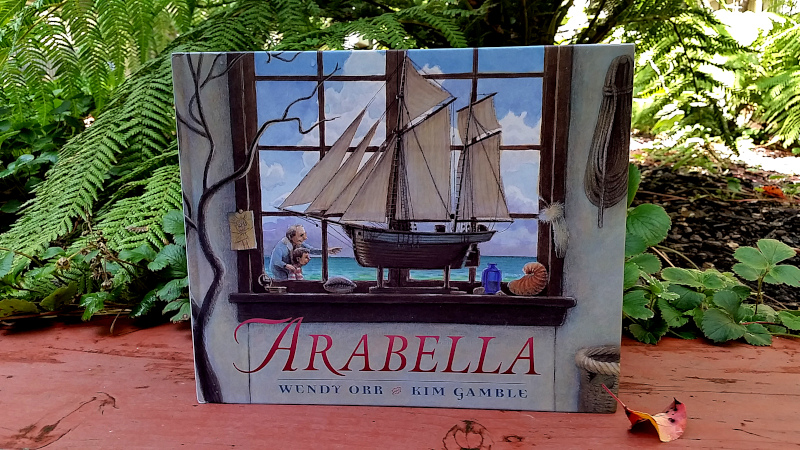 Arabella is a rare thing in picture books: it is a genuinely exciting story. The main character, a boy named Matthew, impulsively takes his grandfather’s sailboat out after a storm. But he doesn’t read the weather right. Away from the shore, the high winds and powerful waves threaten to capsize the sailboat or sweep him off the deck.

He’s afraid he’ll die. He doesn’t, of course; while Arabella portrays the danger realistically, the book has a happy ending. Some children will race through the story, thrilled by the excitement. Others may need to let you read Arabella to them while they are seated snugly in your lap. And they may need to have you slow down, or read certain parts over, to manage their emotions as they listen to the story.

And that’s one of the values of books like this, and why I wish there were more of them. They allow a child to practice handling large, scary emotions from a position of safety and security. This is a skill that will serve them for the rest of their lives.

A picture book with a disabled character

Arabella is rare in another way as well. Matthew is disabled. He uses a wheelchair to get around. But the story is not in any way about Matthew’s disability. Author Wendy Orr never mentions the wheelchair in the text, although it is clearly visible in Kim Gamble’s illustrations.

Picture books that include characters with disabilities are rare. Picture books that represent a disability with accuracy, care, and respect are even more rare. In 1998, when Arabella was published, “We Need Diverse Books” didn’t exist. #OwnVoices didn’t exist. The fact that Orr and Gamble decided to include a disabled character in a picture book that wasn’t about the disability is wonderful. The fact that they avoided making Matthew an object of pity, that he was capable and skillful, and that he wasn’t cured, is astonishing.

It’s perhaps more understandable when you learn that Orr herself had a major car accident in 1991. Before that time, she had a day job as an occupational therapist. Children’s books were something she did on the side. But as a result of the injuries she sustained in the accident, she had to leave her job as an OT. She decided to become a full-time writer. I think perhaps, her accident and her own experience with disability affected the way she chose to portray Matthew.

In Arabella, Matthew goes to spend the summer with his grandfather. His grandfather lives on an island. He travels everywhere in a little red sailboat. His house is full of treasure, including a model sailing ship, “perched on the windowsill as if she was ready to fly.”

Over the days and weeks, Matthew learns to sail.

One night, a powerful storm blows in. It batters the house. When Matthew and his grandfather get up in the morning, they see that it broke the front window where the Arabella had perched. And the Arabella is gone.

Matthew’s grandfather is so heartbroken that he turns and goes back to bed.

Matthew gets dressed and goes to check on his grandfather’s sailboat. It’s safe. And while Matthew stands, staring out to sea, he thinks he sees the Arabella.

And yet, somehow, he gets the boat under control, and moves back towards land. As the winds calm, he finds that the Arabella has followed him. He pulls the tiny ship out of the water.

And when he gets to the dock, his grandfather pulls him out of the sailboat and hugs him, overjoyed that what he loves most has been returned to him from the sea – his grandson Matthew.

About the writer and the illustrator

Author Wendy Orr loves the sea, and it shows. Like Matthew, Wendy had a grandfather who was a sailor. And when he came home from the sea, her grandfather built models of ships in glass bottles. Wendy herself learned how to sail when she was young, and that experience gives Matthew’s story a realism that I don’t think it would have otherwise had.

And what can you say about Kim Gamble’s gorgeous watercolor illustrations? Gamble was a self-taught artist, and one of the most important illustrators of children’s literature in Australia. Anna Feinberg, his major collaborator, said of him after his death, that “he only wanted to create books that had love at their core. I think he preferred in a picture book to emphasize the element of hope and finding joy, to create a visual world for the child that wasn’t overwhelmingly dark or scary – he never sacrificed the drama, but balanced even the most critical pages with light, a sense of possibility. An escape.”

Orr’s story, filled with the love between Matthew and his grandfather, and with their love for the sea, was a perfect story for Gamble’s art.

One problem with the book

The only thing wrong with Arabella is that it can be hard to find. It was published in Australia in 1998, and has long been out of print. Second-hand copies are usually available online (at a premium price), but new or like-new copies may elude you. I’d suggest that you ask your local indie bookseller to help you get you a copy at a price you can afford. It’s worth the extra effort.

Snook Alone: A story of a real dog and a cartoon monk: Snook is a rat terrier who gets left behind on an island when his human, Abba Jacob, has to flee a coming storm.

King for a Day: A picture book for Basant: Malik creates a small, speedy kite for the kite-flying festival of Basant. If he can use it to snag all the other kites out of the sky, he’ll be King of Basant.