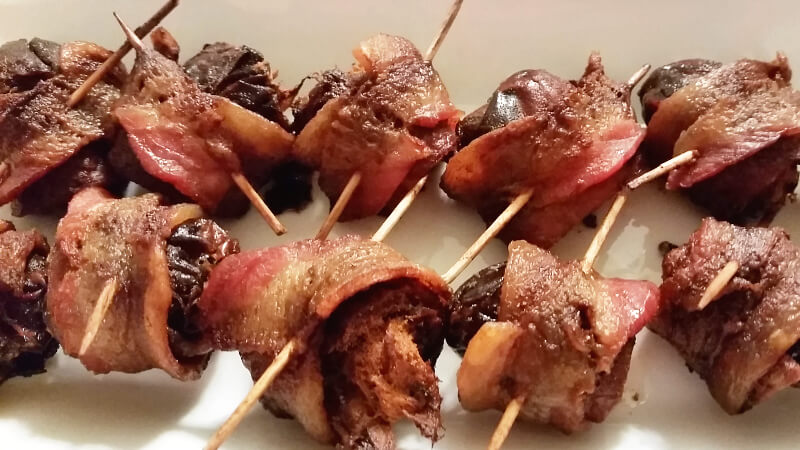 When you read Catherine’s Pascha, you’ll see Catherine loading her plate with hot dogs and chocolate cake. And in the background, someone is asking whether Andrea brought her bacon-wrapped dates this year.

Andrea is a real person, and this is her recipe for bacon-wrapped dates. She makes them every year at Pascha. You should, too.

And you should make them at Christmas. Make them for your New Year’s party. Share them at your house blessing. Bring them to a Super Bowl party. Bake them for your sweetheart for Valentine’s Day. Take them to your parish’s next pot luck. I guarantee you won’t have any leftovers to take home.

What makes Andrea’s bacon-wrapped dates so special? (As if bacon and dates weren’t enough.) The secret ingredient in these delectable morsels is cinnamon. They’re loaded with cinnamon. If you prefer, you can use cardamom or nutmeg instead of cinnamon. You could also use pumpkin pie spice or apple pie spice blend, if that’s what you have on hand. They’ll be good, however you spice them.

And to make them even more special, they are gluten-free, dairy-free, and contain no added sugars. What more could you ask?

1 pound smoked bacon (regular thickness)
cinnamon
pitted medjool dates (a pound should be enough, with a few dates left over)

Before you start, line a couple of cookie sheets with aluminum foil to make clean-up easier.

Cut the bacon slices in half.

Dump a pile of cinnamon on a plate and drag each slice of bacon through the cinnamon to completely coat one side. If you get some cinnamon on the other side, that’s fine.

Lay the bacon strips on a work surface, cinnamon-side up.

Cut the dates in half. If you like, you can stuff each half date with an almond or a half a pecan. I prefer them without the nuts, but that’s just me.

Put a half a date at the end of each slice of bacon. Wrap the bacon around the date and secure with a toothpick.

Bake the bacon-wrapped dates at 350 degrees until the bacon is as crisp or chewy as you like it. I can’t give you an exact time, because it’s going to vary with the thickness of the bacon and how you like it. Check it after 15 minutes, then keep checking every few minutes until it’s done.

Set the finished dates on a paper towel to drain the excess bacon grease.

Move the dates to a plate before they are completely cooled. Otherwise, a bit of the paper towels might stick to the bottom of the dates. (Ask me how I know.) If that happens, you can scrape the paper towel off the dates with a sharp knife.

Cookies and desserts for special diets and special occasions: A few of my favorite recipes, including gluten-free and dairy-free treats.

Cheese and sausage balls: These bite-sized treats are almost as good as bacon-wrapped dates. We make them at Pascha every year.