The Baker’s Dozen: A Review 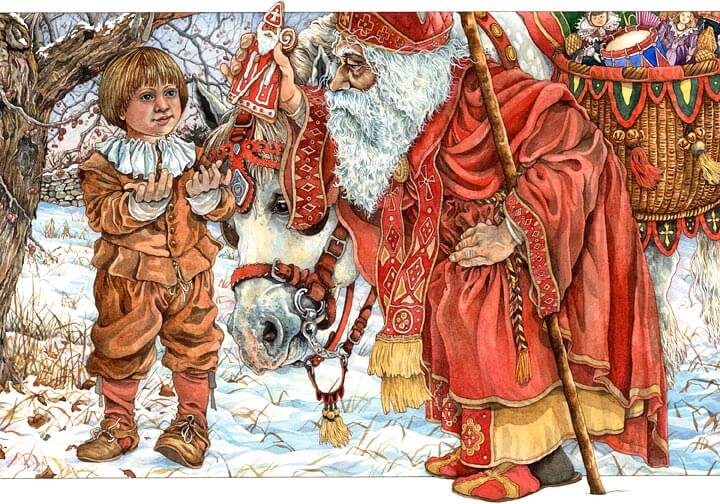 Most children’s book authors have a day job that pays their bills, while they work on their books in the evenings, or on the weekends when they’re not trying to catch up with laundry and cooking. There are exceptions, of course, but not many. I’m a technical writer. Aaron Shepard, the author of The Baker’s Dozen, is a storyteller.

Which seems like an impossibly cool job to me.

The Origin of the Story

Before The Baker’s Dozen was a book, it was a story that Shepard told. And before he told it, it was recorded in Myths and Legends of Our Own Land, a book published by Charles M. Skinner in 1896. And 60 years before that, another version of the story was included in The Book of Saint Nicholas by James Kirke Paulding. Paulding was a contemporary of Washington Irving, and like Irving, he based his own stories on the folk tales that were common among the people of New York state.

The Baker’s Dozen is set in the Dutch colonial town that is today known as Albany, New York. Van Amsterdam, the baker, is an honest man and good at his job. But on St. Nicholas Day, an old woman comes to the store. Not a poor woman, by the looks of her, not someone who needs his charity. A woman who is accustomed to wealth, a woman who is accustomed to being obeyed. She tells him that she wants a dozen of his St. Nicholas cookies. And when he counts out twelve, she tells him that a dozen is thirteen. She wants thirteen cookies.

Van Amsterdam refuses. He tells her that his customers get exactly what they pay for. Never more, and never less. And she tells him, “Fall again, mount again, learn how to count again,” and leaves the store without the cookies.

From that point, Van Amsterdam has nothing but trouble. Until, a year later, he gets a visit from St. Nicholas in a dream. And the old woman returns to his shop for a dozen of his St. Nicholas cookies.

Wendy Edelson’s incredibly detailed paintings are, in my mind, perfect for The Baker’s Dozen. My husband disagrees. He thinks they’re too busy, too detailed, too much.

But I like the too muchness. If you haven’t seen Edelson’s work, try to imagine what would happen if you crossed Jan Brett with Mary Engelbreit, with a dash of Patricia Polacco. That’s Edelson.

There’s a lot to see in the illustrations. The people. The cats. The mice. Van Amsterdam’s books and letters. The variety of breads and cakes and pastries and cookies in Van Amsterdam’s stores.

I particularly love the details in the characters’ clothing and hairstyles. I couldn’t tell you for sure if they’re authentic to the place and time – but I suspect that they are. They look like Edelson spent a lot of time researching her art, before she committed her ideas to acrylics and canvas.

The Baker’s Dozen is a fabulous story. It’s a beautiful book. It would make a wonderful Christmas gift for a little one that you love.

Vasily and the Dragon: A Review: St. Nicholas plays a major role in this retelling of a Russian folk tale.