The Bat Boy and His Violin: A Review 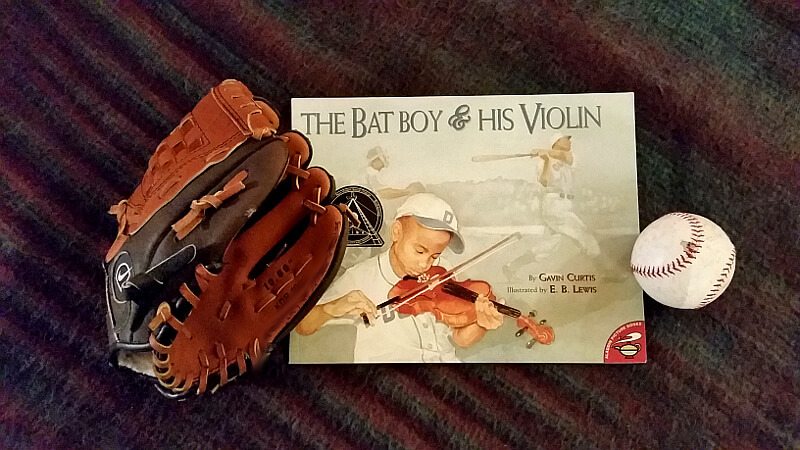 It’s baseball season 1948 when The Bat Boy and His Violin opens. Reginald’s papa is the manager of the Dukes, the worst team in the Negro Leagues. His best players have all followed Jackie Robinson to play for white teams. In 1948, the Dukes have done nothing but lose.

So Reginald’s papa is unhappy and irritable. And it really irritates him that Reginald would rather be inside playing the fiddle than outside playing baseball. It doesn’t help that Reginald insists on calling it a violin.

So Reginald’s papa decides to make Reginald the bat boy for the Dukes. Reginald protests. He has a recital coming up. He’ll be playing his violin in the church basement for anyone who will come listen. His papa brushes him off. And Reginald joins the Dukes on the road.

Reginald tries to please his papa. Oh, how he tries! But the skills required of a bat boy, simple as they are, seem to escape Reginald.

Finally, his papa, in frustration, tells him to play a bit, mostly just to get him out of the way. So Reginald plays. And things begin to turn around for the Dukes.

The Bat Boy and His Violin is a beautiful story. It’s about the love between a father and son. About the expectations they put on each other, and on themselves. It’s about winning and losing – in baseball, and in relationships. It’s about accepting and loving people just as they are.

The story’s beauty comes with a measure of historical reality that tempers its sweetness. For example, when the Dukes come to town for their final game, they have to camp around their battered team bus, cooking their supper over a fire and sleeping on the ground. No hotel in town will let them stay. And when they’re sent away, they have to leave with a smile and a kind word. That’s what the world was like in 1948.

Author Gavin Curtis is a wonderful storyteller, and The Bat Boy and His Violin is a wonderful story. Rich and deep, like the sounds Reginald pulls from his violin. If you read it out loud, you’ll hear the music. It’s not told in rhyme. But the sounds, the rhythms, the rise and fall of intensity, the images conjured by the words, all make the story sing.

The music and the words float over the magical watercolor illustrations by E.B. Lewis. If you see a book with Lewis’s name on it, you know it’s going to be gorgeous. I’m afraid I don’t have the vocabulary to do Lewis’s work justice. The illustrations are warm. Every detail is telling, from the graduation pictures on the piano in Reginald’s living room to Reginald’s consistently crooked bow tie.

The Bat Boy and His Violin is a Coretta Scott King honor book.

Dad, Jackie, and Me: More than a baseball story: This is a story about a boy and his dad, who is deaf. It’s also a story about Jackie Robinson’s first season with the Brooklyn Dodgers. And the story is true.

The William Hoy Story: A baseball biography: William Hoy was a deaf baseball player. He may have been the reason that hand signals became part of the game.