Being Orthodox — with asthma 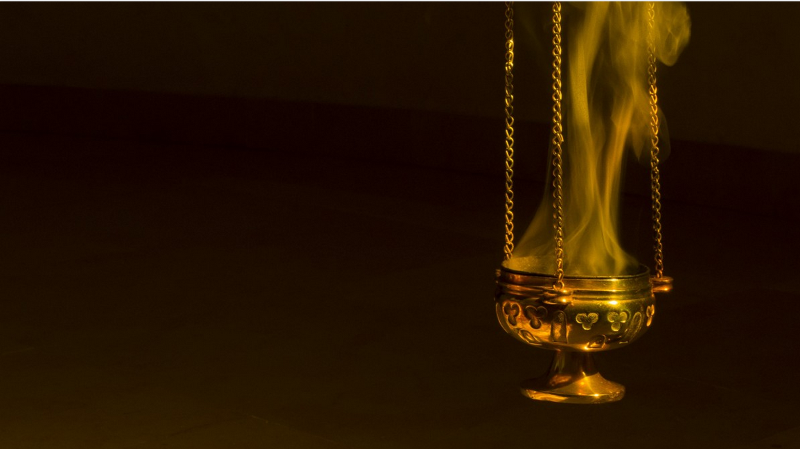 When I developed asthma, thanks to a mold exposure, I suddenly found that liturgy was often unbearable. The incense was thick, the windows tightly shut, and the priest, apologetically, said he could not change this. I said that I understood, that the church could not accommodate itself to everyone. I’ve worked on this acceptance over the years.

When the asthma starts, at first I try to ignore it, while my chest begins to feel like a board of wood. I back away from the censing, stand near the door, ready to dash outside. I try to covertly open a window, but in one church, which is, blessedly, packed, I can’t get near them, so mostly, I’m in the narthex, standing behind an almost closed door, gasping, trying not to be noticeable among all the other people who seem to gravitate to the back of the church, just as my college students did in their classrooms. (A space packed with too many people and no ventilation is also dangerous for asthmatics.)

I typically have to go outside, along with any other sufferers, though often I’m alone. Standing outside the doors in all kinds of weather is rough and getting tougher as I age.

A good day to die

I use my inhaler and wait and hope that this isn’t another ER visit. I’ve had more than my share since, with multiple allergies, I never know when I’ll suddenly zoom from 0 to 60, one minute feeling fine, and then suddenly, straining for air, for help. The epi pen comes out. The children’s Benadryl. I’m allergic to prednisone, so if these things don’t work, I have to say that today might be a good day to die. But when I don’t die, then I feel silly and melodramatic, so I downplay these incidents. I still get looks, and it’s awkward.

Only one priest has ever asked me about the issue and what he can do. When I conducted a choir for seven years, it took years to finally get some relief from the incense swung at the choir, which caused them to lose their voices and choke. (I sometimes had to run outside, however, and then the choir had to carry on, which they always managed.) One deacon of blessed memory filled the censer so excessively that the church’s fire alarm went off, the service stopped, everyone ran outside, and two of us with asthma coughed and gasped and used our inhalers.

Pascha, the Queen and Lady of feasts, is always a scary time for me.

When we’re well, we don’t really want to know about things like asthma or diabetes or any of the myriad illnesses and disabilities that Christ healed. People don’t want to know that people can go over the edge, with no chance to come back. A nurse friend of mine told me that of all the people that come in the door, it’s asthmatics that scare him the most.

Illness is given to us for all kinds of reasons. Early on, it was made clear to me that it was a class I needed to take. So I’ve thought of my difficulties as my own personal struggle. However, I’m more and more uneasy when I see a group of sufferers shivering outside. What about our children and grandchildren and godchildren? What happens to clergy who are constantly breathing in toxins? What about lawsuits?

The word is out there. Incense is bad for your body. This is nothing any of us Orthodox Christians want to hear. We love our traditions and try to guard them from shrill demands coming from people ignorant of the Orthodox faith. But ignoring or even despising science, remaining willfully ignorant is not, I don’t think, faith. More of our children will have life-threatening asthma as we continue our love affair with cars and other toxics. More of our population is aging and having breathing and other issues. When these people disappear from our churches, it’s too easy to forget about them. Or perhaps we visit them but assume we can’t do anything to help them attend services.

It should not have to be so. Simple solutions such as good ventilation and rooms for asthmatics (and other sufferers) in which they can see and hear the liturgy would be a possible start. The hospital of souls, the place where we meet Christ, the Healer, I can only hope, will strive to become a place where asthmatics and all people are included and loved.

And the King will answer and say to them, ‘Assuredly, I say to you, inasmuch as you did it to one of the least of these My brethren, you did it to Me.’ Matthew 25:40, New King James Version

Jeanie Murphy has been Orthodox since 1993. She taught English for many years at Pierce College, and worked as a technical editor at Microsoft, Intel, and Boeing. These days she plays a lot of old-time music (especially banjo) and writes. Her novel Donna Cody: A Tall Tale can be found on Amazon.

Disability and special needs: When you think about barriers that prevent people with disabilities from attending church, you may think about stairs. But as important as physical barriers are, barriers of the heart matter even more.

Just Ask: A picture book by Sonya Sotomayor: This book provides a simple introduction to a range of disabilities, including asthma.

Of Such Is the Kingdom by Summer Kinard: This book provides a practical guide to welcoming families with disabilities into the Orthodox Church. The advice is deeply rooted in the theology of the Resurrection.