A Boy and a Jaguar: A story of words and promises 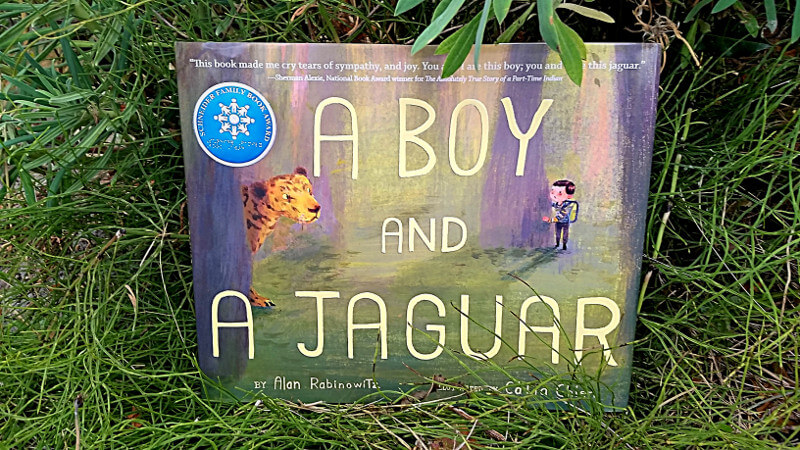 A Boy and a Jaguar is more than a picture book. It’s a memoir written by a noted zoologist and conservationist, Alan Rabinowitz.

When Rabinowitz was a child, he stuttered. Except when he was singing, or talking to animals. Then he could speak fluently. He could tell his pets his fears and hopes and dreams. And he could talk to the animals at the Bronx Zoo.

And he realized something: “Animals can’t get the words out, just as I can’t get the words out. So people ignore or misunderstand or hurt them, the same way people ignore or misunderstand or hurt me.” So he made a promise, first to his pets, and then to a jaguar at the zoo: “I promise that if I can ever find my voice, I will be their voice and keep them from harm.”

When Rabinowitz was growing up, his parents took him to a lot of doctors, tried a lot of therapies, to cure his stuttering. Nothing worked. At school, his attempts at speech were considered disruptive. So the school put him in a class for disturbed children. And he understood that he was deeply, profoundly, broken.

Finally, as a young adult, his parents enrolled him in an experimental program that allowed him to learn to speak fluently. But that didn’t change the feeling of brokenness.

It was only when he was working with animals that he felt whole.

As an adult, Rabinowitz studied bears in the Great Smoky Mountains, then went to Belize to study jaguars. He realized that jaguars were being overhunted. They needed to be protected, if they were to survive.

And he remembered the promise that he had made to the lonely jaguar at the zoo when he was a child. He had found his voice. He needed to be the voice of the jaguars, to keep them from harm.

It was through his efforts that Belize set aside the first jaguar preserve. Rabinowitz could identify every jaguar at the preserve, just from their tracks. And when he saw tracks from a new jaguar, the largest he’d seen, he followed the tracks, hoping to find the jaguar.

As it turned out, the jaguar was following him.

The story Rabinowitz tells is beautiful and powerful. Anyone of any age who has ever felt isolated or broken will identify with him.

And the fact that he remembered the promise he’d made in childhood, and kept that promise as an adult, is something that will affect children deeply.

Catia Chien’s art is really quite lovely. She describes her work as being full of whimsy and color, and it is. But this story doesn’t call for whimsy. And I’m afraid that the children who will be most affected by this story, and will care most about it, will be put off by the illustrations, which seem designed to appeal to younger picture book readers, to preschoolers and kindergarteners.

But the story will, I think, resonate especially in the hearts of older children, from third graders on up. And it would make me sad if these children skipped the book because of the illustrations.

That blue shiny circle on the cover of A Boy and a Jaguar is from the Schneider Family Book Award. The Schneider is given each year to “a book that embodies an artistic expression of the disability experience for child and adolescent audiences.” It has also won a long list of other awards, including the Ezra Jack Keats Award for new writers.

As I read this book over and over, I kept feeling like I wanted to know more. More about Rabinowitz. More about his life and his work.

If you feel that way, too, or if you want to use this book in your classroom or homeschool, there are a lot of resources available.

Rabinowitz is the co-founder and chief scientist CEO of Panthera, a non-profit dedicated to the conservation of all of the world’s wild cat species and their habitats. You can learn more about him on that website. There’s a short film there, about his work. And you can also see him on an old episode of The Colbert Report, where he almost makes Steven Colbert cry.

You can hear a lovely interview with Rabinowitz on NPR, where he talks about A Boy and a Jaguar, and watch a brief video about the Cockscomb Basin Wildlife Sanctuary, the jaguar preserve in Belize.

Rabinowitz is still working to keep the promise that he made to the jaguar at the Bronx Zoo so many hears ago. In his current project, Journey of the Jaguar, he’s working with governments and scientists throughout the jaguar’s range, from Mexico to Argentina, to save the jaguars.

Besides his work for wild cats, Rabinowitz is also a spokesman for The Stuttering Foundation of America. There’s a section on that website just for kids.

Stuttering is not a rare disability. In fact, about 1 person in 100 is a stutterer. Because it impairs communication, and thus relationships with other people, it can have a far more serious impact on the affected person that one might first think. A Boy and a Jaguar doesn’t sugar-coat the pain that stutterers often feel. But Rabinowitz’s message is ultimately one of hope, and of power. He’s an amazing man, and he’s written an amazing book.

Alan Rabinowitz died of chronic lymphocytic leukemia in August 2018. May God make his memory be eternal.

After the Fall: A book about healing from fear: Dan Santat’s epilogue to Humpty Dumpty’s story is truly magnificent. And don’t think that it’s just for children. Santat wrote it for his wife.

Looking Out for Sarah: A day in the life of a guide dog: This picture book follows Sarah and her guide dog through a typical day.