A dowry for the widower’s daughters 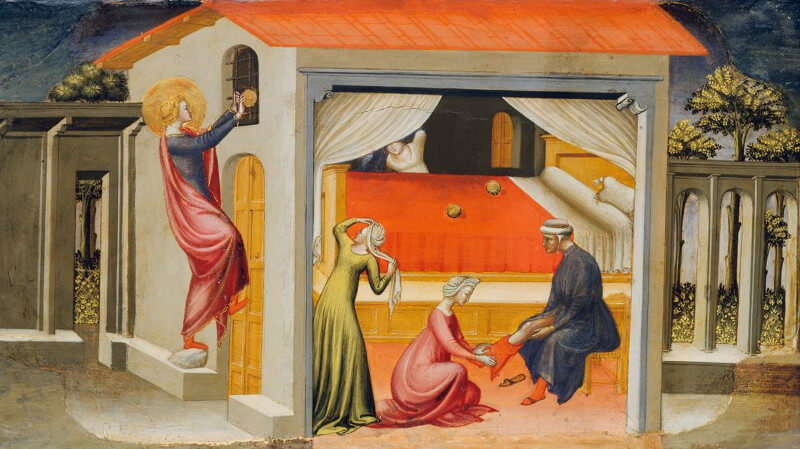 The story of St. Nicholas and the widower’s daughters is, today, the best known story from the life of St. Nicholas. This story is the reason we hang stockings for St. Nicholas to fill (or set out shoes, if you follow the Dutch tradition). In The Saint Nicholas Day Snow, Uncle Andrew tells the children one version of this story. Here’s the way I like to tell it.

Listen to the story.

Before Nicholas was a saint

When St. Nicholas was still a young man, before he was a bishop, and long before he was a saint, he was an orphan. His parents died in one of the epidemics that swept through the countryside. Nicholas survived the epidemic. Perhaps, when his parents became ill, they sent their only son to stay with his beloved uncle, Bishop Nicholas of Patara, at the monastery outside the city. And he stayed there, after the death of his parents.

His parents had been wealthy, but he had no interest in their money. He wanted to live in piety and obscurity. He spent much of his time standing quietly in the back of the church, praying. When he was in the town, he moved quietly, listened much, and said little.

And he heard a great deal.

St. Nicholas, of course, was not a gossip. But wherever people gather, stories are told. And he heard the stories. A man who lived near his parents’ home had fallen on hard time. His wife had died during the epidemic that had killed Nicholas’s parents, and he had been stricken and nearly died. He was left with three young daughters to raise on his own. Then there had been an accident. He’d made his fortune in trade, but when he could no longer work, there was no more income. His wealth dwindled, as he spent money on doctors, on food, on the necessities of life.

People offered to help, but he was a proud man. He refused every offer. And over time, the offers dwindled.

Eventually, he knew that he had to do something. He had sold what he could. He’d rented out part of his home. But even with that, he and his daughters were going to starve. He’d tried to find husbands for them, of course. With a good marriage, they’d be taken care of. But the friends that had offered to help wouldn’t accept a dowerless daughter for their sons. And there was no money for a dowry.

All they had left was the clothes on their bodies. And, of course, their bodies. And his daughters’ bodies were beautiful. He knew it was an evil thought. But starvation was evil, too. He began asking the brothels around Patara how much his daughters could earn that way. Working as prostitutes would put them out of the communion of the Church, of course. But at least they wouldn’t starve.

How to help a proud man

St. Nicholas couldn’t help hearing about the widower’s plans for his daughters. Everyone in Patara was talking about it. Saying what a shame it was that the old man wouldn’t accept help. Speculating about how much the girls would earn. Wondering if it would be enough to restore the family’s fortunes.

If only the man had set aside enough money for dowries for the girls. But it’s hard to think that far in the future when you need food and medicine today.

Of course, Nicholas thought, he had more than enough money to provide dowries for the widower’s daughters. But the old man wouldn’t accept it. He knew that for sure, because he’d already tried to give him the money. The old man’s wrath had been terrible.

But his plans were terrible, too.

St. Nicholas walked along the waterfront, pondering. The sun was setting. He watched a wharf rat scurry across a ledge and into a house through a window. Even when windows were closed and barred, rats and mice could slip in.

And that’s not all that could slip in.

Nicholas ran back to the monastery and told his uncle his plan.

Under cover of darkness

It didn’t take much to make it happen. Nicholas exchanged his everyday clothes for those of a high-ranking servant. He would attract too much attention, walking the streets at night. But nobody would notice a servant.

He filled a small leather pouch with gold coins and fastened it to his belt. It clinked a bit as he walked, but not too badly. It was his good fortune that the moon was new that night. There would be only starlight to show him his way – and only starlight to betray his face to people walking by. He could do this.

Keeping his head down, Nicholas walked from the monastery to the neighborhood where he’d lived as a small child. He stopped in the shadows and stared at the house. The front windows wouldn’t do. Someone would see him, even at that hour, and mistake him for a robber. But he couldn’t drop the gold into a storeroom. It might never be found.

He walked to the side of the house, took the pouch of gold from his belt, and dropped it through the window. It landed with a soft thunk. He held his breath. He heard people inside the house stir. Slowly, they became still. Silence returned. He slipped away into the darkness.

St. Nicholas waited until after the wedding, and then he waited another week for the new moon. He donned the servant’s clothing again, and went back to the widower’s home. A few days later, another wedding was announced.

The rumors of brothels had ceased. The widower was one again attending divine services at church. His younger daughter went with him. They had quit going long ago, ashamed to be at church in clothing that was patched and worn. But the gold had allowed them new garments for the weddings. Simpler garments than they had worn in the past. But garments that they could wear to church without shame.

But gold enough for the garments wasn’t gold enough to support the widower and his remaining daughter for long.

As St. Nicholas planned his next midnight delivery, the widower stood in the church and prayed. He had received help he had no way to refuse. Now he wanted to know who had delivered his daughters from the evil that he had planned for them. He asked God to show him his benefactor, so that he could repay the kindness. Not with money, of course. He’d never be able to do that. But he wanted to pray for his benefactor by name.

On a moonless night a few weeks later, the widower was restless. The night was cold. His joints ached. He couldn’t sleep. And has he lay there in the darkness, he heard the sound of footsteps outside. He got up as quietly as he could, and went out his front door. As a shadow slipped out into the street, he shouted.

And the shadow stopped moving. The widower approached.

It was the young man, Nicholas.

They stared at each other.

“Shall I give you a seat of honor at the next wedding?”

Nicholas shook his head. “No! Please, father, tell no one. Let it stay between us as long as we both breathe.”

The old man nodded. He held out his arms and embraced Nicholas. His tears fell into the saint’s hair.