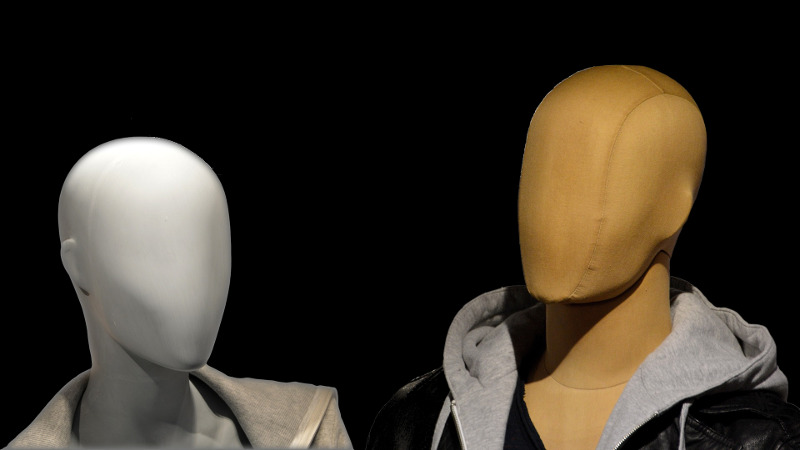 It was early November. We were in the car, talking about Halloween costumes. A teenager visiting our house had worn a costume that included contact lenses. One lens made his eye look red, and the other made his eye look black.

“Mom,” asked my child, “do some people really have eyes that are different colors?”

“Yes,” I replied. “You’ve met my editor, remember? And she has one blue eye and one green eye. Those aren’t contact lenses. Her eyes are really different colors.”

There was a pause, then, “I wish I had eyes like that.”

“So people could tell me apart.”

That was not an answer I expected. It was decidedly weird. And I had finally learned, after years of parenting my not entirely typical kids, to pay attention when they said something weird.

“Apart from what?” I asked.

“Apart from other people.” The voice had that hint of impatience that suggested the answer should have been obvious.

I thought a moment. “How do you usually tell people apart?” I asked.

“By their shoes, mostly.”

Why would my child recognize people by their shoes, and not by their faces? I’ve read Oliver Sacks, so I had lots of questions about what might be going on in my child’s brain. After several visits to local neurologists and a visit from Dr. Brad Duchaine, a neuroscientist who flew to the Pacific Northwest from the east coast to study my children, we finally got an answer. This child had a condition called prosopagnosia. Face blindness. And not just this child. One of the older siblings had it. And so did I.

That explained a lot about my life.

It also explained why my child had been kicked out of daycare a few years before. They’d been on a field trip to a nearby park. There was a fall, and a skinned knee. The mom who came along as a chaperone swooped in to help, and my child freaked out. Hitting, spitting, screaming, kicking, as if the mom was a kidnapper. And when things finally settled down, my child insisted that the teacher was lying, that the mom wasn’t the kidnapper in the park. And my child absolutely refused to apologize to the teacher or the mom. There was a spirit of rebellion, the daycare said, and they were a Christian daycare. My child couldn’t stay.

But it wasn’t a spirit of rebellion. My child did exactly what children are taught to do if a stranger tries to snatch them off the park. The problem wasn’t rebellion. It was faceblindness.

Faceblindness also explained the time we lost the other faceblind child at the zoo. A woman had walked by wearing a coat like my coat. And so my child followed the coat, trying to catch up with the woman who must be me, but wasn’t. It seemed strange at the time, but it makes perfect sense now.

So many things make sense now, that never made sense before.

If your brain works the way it should, you recognize many thousands of faces. And you recognize them almost instantly. It doesn’t matter if the owner of the face changed their hairstyle, or if they have new glasses, or if 20 years have passed. You know who they are.

Those of us with prosopagnosia recognize far fewer faces, or none at all. If we don’t recognize your face, we have other ways to figure out who you are. We do it the same way you would do it if everyone around you was wearing a mask. You’d recognize the person who is 6’8” tall. And you’d recognize the person who has stick-straight snow-white hair down to the middle of her back. But the folks of average height, with medium brown hair worn in an ordinary style – you’d have trouble figuring out which one was which. Their voice might give them away, or the way they walk, or their clothes. But it would take a bit of time and effort to sort them out. And even then, you might not be sure.

That’s how it is for those of us who are faceblind. But for us, it’s all the time.

So you need another explanation for why this happens. And the most logical explanation is that you don’t care enough about people to remember them. You don’t pay enough attention to the people you live with and work with. Obviously, you’re a terrible person. Because if you were a decent human being, you would remember the people around you.

It was such a relief to find out that the problem wasn’t that I was a terrible person. I simply had prosopagnosia. A neurological glitch.

Prosopagnosia isn’t an all-or-nothing condition. Some of us don’t reliably recognize the faces even of people they know well. One of my children, for example, doesn’t recognize the pictures of family friends on the Christmas cards we get every year. A woman I know didn’t recognize her granddaughter when she went to pick her up at daycare.

Some of us always recognize a few faces, maybe even dozens of faces. That’s a far cry from the thousands of faces that typical people recognize. And it might be good enough most of the time.

Until we need to recognize someone we don’t know well. Like the neighbor at the end of the block. Or the co-worker who started last week. Or the women in Philoptochos at the parish you just joined.

Or actors. I rarely recognize the actors in a movie. I used to think that was because I was just so into the character that the actor just disappeared for me. But I don’t recognize actors when they’re on talk shows or Saturday Night Live, either.

Movies and TV, on the other hand, usually require you to recognize faces. A small cast helps. Theatrical techniques, like the distinctive costuming in a superhero movie, also help. George Lucas used a lot of theatrical techniques in the original Star Wars movie, and I loved it. But Gareth Edwards didn’t carry on that tradition in Rogue One. And when my faceblind children and I saw Rogue One, we couldn’t follow the story. It wasn’t much fun.

Why faceblind people are socially awkward

But if we see someone out of context, or if they’ve changed their hair color or their glasses, we may not recognize them. And people get offended when you don’t recognize them. They think you’re stuck up, aloof, or rude. So we work really hard to figure out ways to avoid giving offense.

We don’t want to ask you who you are, because we know that’s a good way to make sure you never want to talk to us again. So we might say things that seem just a bit off – like, if I’m introduced to you, I’ll say, “It’s nice to see you.” If we’ve never met, that’s a little bit odd. But it’s a whole lot less odd than saying “it’s nice to meet you” to the neighbor two houses down.

At a party, you’ll likely find us sitting in a quiet corner at a party. That’s not because we’re shy. It’s because we don’t know who is who. And striking up a conversation when you’re not sure whether you’re talking to a stranger or your child’s soccer coach is tricky. Letting people come to us is safer. If they’re a stranger, they’ll introduce themselves. If they’re the soccer coach, they’ll say something that gives us a clue.

Faceblind in a new place

I was once described in an official document as “boring.” I am not a novelty seeker. I don’t look for activities that give me a jolt of adrenaline. I am somewhat reluctant to try new things. If you look at my resume, you’ll see that I stay at jobs longer than most people in my industry. I am reluctant to take up a new activity. Attending a new church is hard.

And I think that’s because of I’m faceblind. When you join a new in-person social group, you have to be able to figure out who is who. The man you just passed in the hall – is he your boss’s boss? Or is he the man who cleans the kitchens? Is the woman who smiled at you in the narthex the one who is doing coffee hour with you next week? If you want to speak to the person who runs the parish bookstore – who is it? Even if you’ve spoken to them before, how do you find them again? Asking someone is no good – the person you ask might be them.

Starting something new almost always involves meeting new people. And I love people. But navigating a space where I don’t yet know the people – that’s not something I love.

Things that go with prosopagnosia

Neurological glitches seem to like company. You hardly ever find just one of them. Prosopagnosia is a frequent fellow traveler with autism – about two-thirds of people with autism have some degree of prosopagnosia.

And many people who have prosopagnosia have another condition called topographical disorientation or topographical agnosia. At our house, we called it direction deficit disorder. It just means you have lots of trouble finding your way around. For some people, it means they can’t find their way around their own house. They can’t walk around the block and be sure they’ll find their way home.

For me, it means I grew up with my family saying I couldn’t find my way out of a paper bag. That wasn’t quite true. But it is true that I carried a map of my high school with me all three years I attended, and I referred to it regularly. I didn’t need it during passing periods – I could walk with classmates who were going the same place I was going. But if I had to leave a classroom on my own, and get to the office, or the restroom, or some other classroom, I needed a map.

I’ve wondered, sometimes, if I’m a writer because words are more reliable than either the people or the places around me. I think in words. I explore the world through words. I use words to see the world, to organize it and relate to it in ways that make sense. And I build relationships through words.

Without words, I don’t know who you are.

Logos for my nonverbal son: Summer Kinard reflects on a faith where God is known as Logos, the Word, when you don’t have words.

Disability and special needs: Sometimes, people are afraid they’re going to say or do something wrong when they meet someone with a disability. Here are some suggestions from people with disabilities, about how to be welcoming at Church.