Father and Son: A nativity story from St. Joseph’s point of view 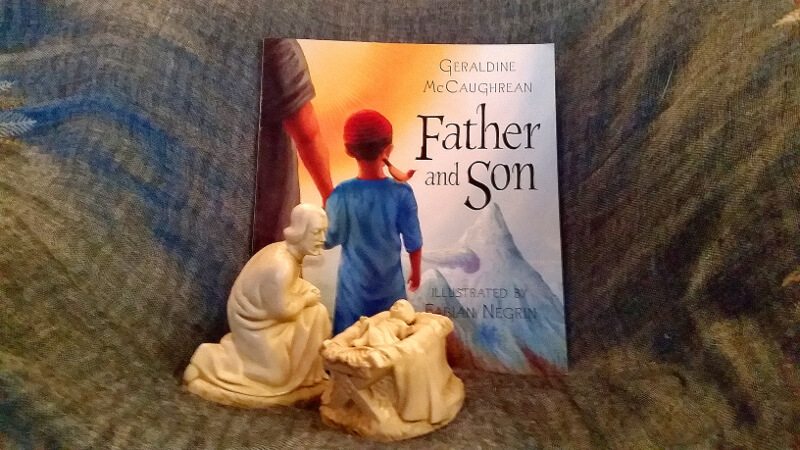 But I think, even if St. Joseph weren’t my patron, Father and Son would be a year-round joy. It is a Nativity story in so much as its setting is the stable in Bethlehem. But it’s not about Bethlehem, not exactly. The story begins “After the star had set, after the angels had roosted, after the shepherds had hurried back to their sheep.”

It’s about what must come after the Holy Night. It’s about all the implications of the Incarnation. About what it means for God to have become a tiny child. What it means to Joseph to look after the Child whose true Father is God.

The mystery of the Incarnation

In Father and Son, Geraldine McCaughrean uses Joseph’s musing to explore the mystery of the Incarnation. Joseph thinks about this new child, “Mine, but not mine.” He thinks of the future, framing his relationship with this Child in the sorts of contradictions and juxtapositions that you find in Byzantine poetry.

And the book is poetry. It isn’t metrical. It doesn’t rhyme. But the Incarnation is hard to wrap your mind around. It demands the language of poetry. And McCaughrean gives us pages that read like portions of a canon, or part of an akathist.

“Someone tell me: how do I protect a child whose arm brandished the first bolt of lightning, who lobbed the first thunderclap, who wears sunlight for armour, and a helmet of stars? And yet … and yet … somehow, my heart quakes for you, child, small as you are.”

“How can I put a roof over your head, knowing it was you who glass-roofed the world and thatched the sky with clouds, and stitched the snow with threads of melting silver?”

The book is many-layered. It’s simple enough to appeal to a young child. But the questions at the heart of it provide much for adults to grapple with.

Fabian Negrin should be better known in the US than he is. In 2014, he was nominated for the Hans Christian Andersen award, the highest award there is for authors and illustrators of children’s books. It’s a lifetime achievement award, given to authors and illustrators whose works “have made an import, lasting contribution to children’s literature.”

People often call his illustrations dreamy or luminous. They are. And in Father and Son, if you look closely, you’ll see references to other stories you know. On one page, for example, you see Jesus as a young boy; he seems to have spilled a basket of food onto the floor. Five loaves and two fish.

On the page where Joseph asks how he can “feed and clothe someone who seeded the oceans with fish and hung up fruit in the trees,” the text is bordered with lilies of the fields.

And everywhere in the book, a small bird is with Jesus. Not a dove – perhaps a Western tanager? It perches on his shoulder, flies over his head, pecks at the bread that is spilled on the floor.

My only quibble with the illustrations is that Joseph is not an old man. To me, that’s a real miss. By tradition, Joseph was an old man, a widower with grown children, when he was betrothed to Mary. But perhaps the author or the publisher was responsible for choosing to depict Joseph as a younger man. It’s a small fault in a glorious book.

Joseph was an old man: Mary wanted to remain a virgin. Her guardians wanted her to be married. They compromised on finding an old widower, who would be more than a guardian, less than a husband.

St. John the Theologian and the Mother of God: In the Orthodox tradition, St. Joseph was a widower with grown children and grandchildren before he was betrothed to Mary. And one of his grandchildren was St. John, the beloved disciple.