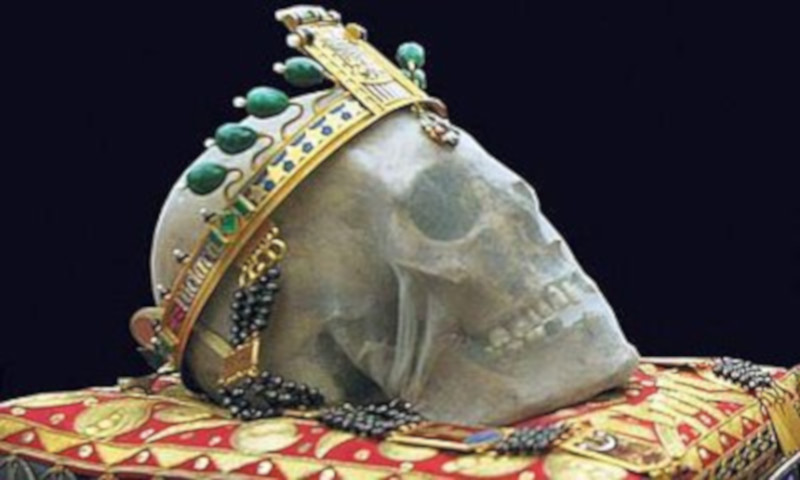 It’s the Feastday of St. Wenceslas!

And, of course, Wenceslas wasn’t a king. Not during his lifetime. He was the Duke of Bohemia, a region that is now the western portion of the Czech Republic. He was dead when the Holy Roman Emperor Otto I declared him a king.

Wenceslas’s grandparents had become Christians when the missionary saints Cyril and Methodios came to Bohemia. His father, Vratislav, was a Christian. His mother, Drahomira, was a pagan who was baptized just in time for the wedding.

In the years that followed their wedding, Vratislav and Drahomira had six children, two boys and four girls. Wenceslas was the eldest.

When Wenceslas was 13, his father was killed in battle. After that time, Wenceslas was pretty much raised by his grandmother, Ludmila, while his brother Boleslav was raised by their mother, Drahomira.

Ludmila ensured that Wenceslas was taught everything he would need to know as a duke and as a Christian. He learned to fight wars. He also learned give alms generously.

His almsgiving, of course, endeared him to the poor, but not to the other powerful leaders of Bohemia. Especially not to Boleslav.

The education that Drahomira arranged for Boleslav was very different from Wenceslas’s. Drahomira’s sympathies were still largely pagan. And Drahomira resented the influence her mother-in-law Ludmila had on Wenceslas.

Not long after her husband’s death, Drahomira arranged to have Ludmila murdered. (Some stories said the assassins strangled her with her veil.) Then, because Wenceslas was not yet of age, Drahomira took control as regent.

And because Drahomira was still pagan at heart, she began taking action against Christians. While practicing his faith in secret, Wenceslas did everything in his power to help the Christians. As an under-age duke, that wasn’t a lot. But he gave the harvest of his own vinyards and wheat fields to the Church. That, at least, meant that the Church would have bread and wine for the Sacraments. (Incredibly, St. Wenceslas Vinyard, at Prague Castle, is still a functioning vinyard, and if you’re in Prague in late September, you can go to a wine tasting there!)

When Wenceslas turned eighteen, he took control of Bohemia, placed it under the protection of Germany, and exiled his mother.

He didn’t have much choice, but the Bohemian nobility didn’t like being under the Germans. Wenceslas himself might not have liked it very much; when you have to pay tribute, you don’t get to do the things you might prefer to do with your money.

Wenceslas and his brother might have gotten along all right, with their mother away. Boleslav was content to be his brother’s heir, and to wait for his turn as Duke of Bohemia.

But when Wenceslas’s first son was born, Boleslav’s supporters began pointing out that this new baby was now the first in line for the throne. Boleslav would never be Duke of Bohemia if he didn’t do something.

So he did something. He had his brother murdered.

On the steps of the church.

Following a celebration of the feast of Ss. Cosmos and Damian.

A feast that Boleslav had invited him to, in order to kill him.

Boleslav and his servants took Wenceslas’s body away, and dumped it in a secret place without burying it. Then they tried to clean the bloody mess they’d left on the steps of the church, but no amount of soap and scrubbing would remove the blood. It remained on the stones, silently accusing them.

This miracle brought Boleslav and Drahomira to repentance. They retrieved the body of their brother and son from the place where they had discarded it, and they brought it to the church of Saint Vitus, a saint whom Wenceslas had loved.

Almost immediately, Wenceslas was declared a martyr and a saint. Hagiographies were written. The people who had received alms from his hands began to pray at his grave. Miracles occurred.

And yet Boleslav, not Wenceslas’s infant son, was Duke of Bohemia. He ruled for a time, then died, and was forgotten. His brother Wenceslas, though, has been remembered for a thousand years and more, and he is as beloved today as he was when he was Duke.

Perhaps even more beloved. During late September every year, the Feast of St. Wenceslas is celebrated with great joy throughout the Czech Republic. There are church services and prayers, of course. And parades and concerts and beer gardens and wine tastings and folk dances and all manner of events in honor of St. Wenceslas.

Today angels and men share a common joy.
Heaven and earth join together in splendid chorus
for thy memorial. O holy Prince Wenceslaus.
And we sinners earnestly cry aloud unto thee:
Pray thou to the Master in our behalf,
that from dangers and from invisible foes,
He may deliver us who honor thine all-honored memory.

Photo credit: The image of the skull of St. Wenceslas is a detail of a photo taken by Kmenicka [CC BY 3.0 (https://creativecommons.org/licenses/by/3.0)] with the background removed.

6 ways to celebrate St. Stephen’s Day: You can sing “Good King Wenceslas,” of course. But maybe you’d rather bake cookies, or practice almsgiving, or ride a carousel.