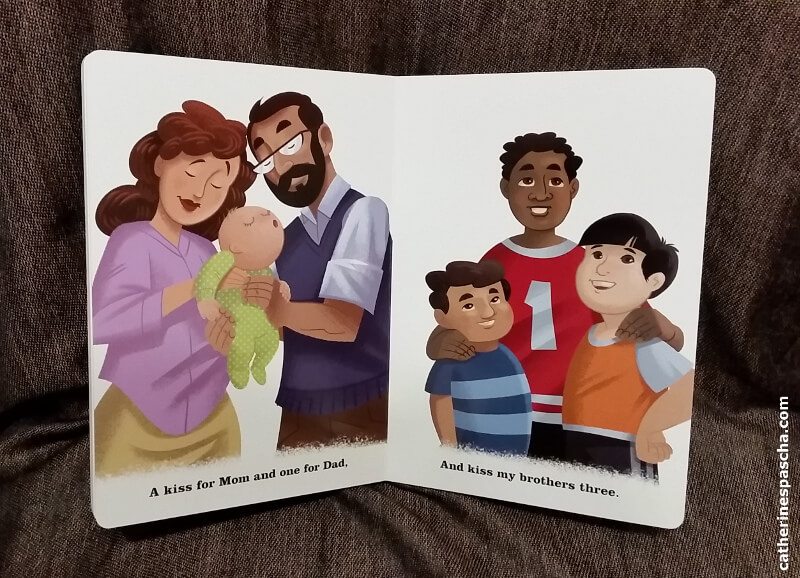 Parents! Grandparents! Godparents! You’re looking for books for Christmas gifts for your little ones, aren’t you? I mean, I know it’s still October. But I also know how hard it is to find the perfect book. This year, though, for once, it’s easy. If your little ones are the right age for board books, they need Goodnight Jesus, Angie Isaac’s new story about a little one kissing everyone good night.

But your children and grandchildren and godchildren undoubtedly already have Goodnight Moon. And Sandra Boynton’s Going to Bed Book. And maybe they have Twenty Yawns and Good Night, Baddies too. So why do they need Goodnight Jesus?

They need it because it starts with the little one kissing icons of Jesus and Mary. Then he kisses Andrew and Peter and “John in scratchy clothes.” He kisses more saints. He kisses the Gospel book and the cross. Of course he kisses his family. He kisses a picture of his grandmother. He kisses his stuffed bunny. And he even blows a kiss to his goldfish!

All that kissing is so sweet and so happy and so thoroughly Orthodox.

But wait … let’s back up a bit. I’ve been calling the little one “he,” and I shouldn’t. Because both Isaacs and Nicholas Malara, the illustrator, were careful to make the little one just a little one. A mostly bald head, a few wisps of blond hair, green polka dot pajamas. The child in the story could be a little boy or a little girl. He or she. It doesn’t matter to the story one bit.

Malara made another choice in his illustrations. “Orthodox Christianity,” he said, “is rich with cultural diversity, and we wanted to celebrate that a little through the artwork in this book.” R.J. Hughes, the illustrator for Catherine’s Pascha felt the same way. That’s why Catherine and Elizabeth attend such a diverse church. But Isaac didn’t send the little one in her story to church. It was bedtime. They were all home.

Yet Malara “wanted to represent as many ethnicities in the book as possible so that there would be no potential for any family reading the book to feel excluded.” So he made the very interesting choice of making the little one’s family a transracial family. The little one has blond hair and big blue eyes. Neither of her parents is blond, nor are any of her three brothers. Her parents could be Greek or Palestinian or Lebanese. Her brothers are each of a different race: one is Black, one Asian, and one perhaps Hispanic.

And Goodnight Jesus has just made that easier to do.

A Child Who Never Sleeps: When my children were young, sleep was a huge issue in our house. My kids didn’t sleep easily. They didn’t sleep well. And kids who aren’t getting enough sleep – it’s a problem for me. If it’s a struggle for you, too, here’s some stuff I learned that might help.

Twenty Yawns: A Review: Let your little one yawn along with the sleepy people in this adorable book, and it might just make sleep come a little easier.