How did Easter get its name? 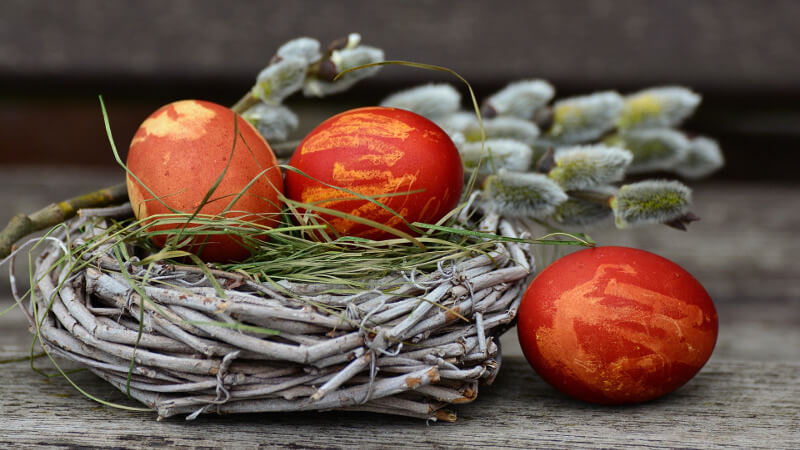 Why is Easter called Easter?

For all Christians, the heart of the faith is the Resurrection of Christ. At first, the celebration of the Resurrection was called Pesach, the Hebrew word for Passover, because the Passover feast was being celebrated when Jesus was raised from the dead, and because in his Resurrection Christ fulfilled the promise of the Passover sacrifice. Pesach was adapted into Greek as Pascha. (They wrote it Πάσχα, of course, but they said paska.)

As the Christian faith spread throughout the world, the Greek word was adapted into other languages. So, if you speak Spanish, you call the Feast of the Resurrection Pascua; if you speak Italian, Pasqua; if Danish, Påske.

But in English-speaking countries, it’s most often called Easter. How did that happen?

Was Easter Named after a Pagan Goddess?

Not the Goddess Ishtar

Easter is not named for a Mesopotamian goddess named Ishtar. That idea was made up out of whole cloth by one Alexander Hislop, a virulently anti-Catholic minister of the Free Church of Scotland from the early nineteenth century. He wrote a book in which he sought to prove that the Roman Catholic Church had been a secret pagan society since the time of Constantine.

Constantine, according to Hislop, only pretended to be a Christian. He really stayed pagan, and he used pagan words for Christian things, to hide his true beliefs. Since Ishtar sounds sort of like Easter, it’s obvious (if you’re Alexander Hislop) that Constantine brought Ishtar-worship into the Church by pretending that Ishtar was Easter.

Using that logic, of course, Hislop would have argued that if you give your mother a gift, you’re trying to kill her, since gift in German means poison.

That’s not how language works, and it’s not how Easter got its name. So we can discard this idea and move on to the next.

Not the Goddess Eostre

Easter is also not named for an Anglo-Saxon goddess named Eostre. For one thing, the Anglo-Saxons didn’t name their months after gods and goddesses. They named months after seasons and weather and agricultural signs, like Mild-month, and Plant-month, and Winter Full Moon.

More significantly, though, it’s unlikely that that there ever was such a goddess. The only evidence that a goddess called Eostre existed is in one line in the eighth-century history written by the Venerable Bede. There is no record of her in any of the places such a goddess would have been written about had anyone worshipped her, no carvings, nothing. Bede was a decent historian for the time, but he got this one just plain wrong. This is also not how Easter got its name.

What Bede got right

Bede, of course, wasn’t entirely wrong. It was true that the English name for the month in which Pascha fell was Eosturmonath. It was also true that English-speaking people of his time called the Feast of the Resurrection Eostur.

But Bede somehow missed that the English-speaking people also called the Feast Pasche. During Bede’s time, and for about a thousand years afterwards, they used the two words interchangeably.

Furthermore, Eostur wasn’t the name of a goddess. Rather, the word eostre meant springtime, and east, and dawn. Eosturmonath was the name of the month in which spring began. It carried connotations of new life, of resurrection. So English-speaking people began calling the feast Eostur, Resurrection.

That isn’t a uniquely English thing. There are a few other places – Serbia, China, Korea — where the word for the Feast of the Resurrection is the local word for resurrection and not a variation on Pascha.

How Did Easter Get its Name?

If English-speaking people used to use two words for the Feast of the Resurrection, what happened?

In one word: Tyndale.

When John Wycliffe translated the Bible into English in 1382, he did the same thing, for the same reason. He used the word Pask to mean both Passover and Easter. He could have used Easter for both, and everyone would have understood him just as well. It’s likely that he felt Pask was a “truer” or more accurate way to render the word.

Tyndale’s Translation and the KJV

William Tyndale disagreed. When he translated the Bible in the early 1500s, he didn’t like using the same word for a Christian feast and a Jewish feast. So, like any good English-speaking scholar, when he couldn’t find a word he wanted, he made one up. Henceforth, in English, the Jewish Feast of Unleavened Bread would be called, not Easter or Pask, but Passover.

That left Tyndale with two words to choose from for the Christian feast. He chose Easter.

When the King James Version was created in the seventeenth century, the translators followed Tyndale. They translated the Greek word Pascha as Passover when it was referring to the Jewish feast. In the book of Acts, they translated it as Easter.

Of course, the word Pask didn’t die out immediately, just because Tyndale and later translators decided to use Easter. For hundreds of years, people in England continued to use both words. As late as April 1859, an article in the Times-Picayune newspaper of New Orleans, Louisiana, noted that, in parts of England, Easter was still called Peace. Even today, Easter eggs in parts of England are called pace eggs. The word Pascha is still there, even though it has faded greatly with time.

A Place for Pascha

So when Orthodox Christians in English-speaking countries call the Feast of the Resurrection by its old name, Pascha, they aren’t importing an exotic word into English. Instead, they are returning the word to its proper place, alongside Easter. English has room for both words. It always has. It always will.