ADHD in The Ink Garden of Brother Theophane 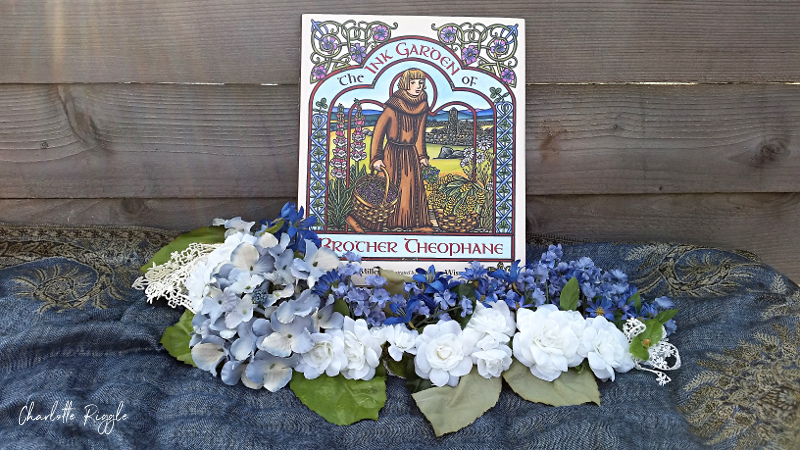 The Ink Garden of Brother Theophane is the story of Theophane, a young monk in a monastery in the mountains of Mourne, in Ireland, in the Middle Ages. Author C.M. Millen doesn’t say that Theophane has ADHD. It would be an absurd thing for her to say, an outrageous anachronism, because in that place, and in that time, there was nothing called ADHD.

And yet, in that place, and in that time, there were people like Theophane.

Theophane wasn’t like the other monks. They were quiet. They were orderly. Every day, after they had eaten and prayed, they went to the scriptorium, where they copied manuscripts on brown parchment with brown ink. And they were content.

But Theophane — in another century, he might be called a problem like Maria. He struggled to focus on his work. He always needed something to be going on around him. So he saved some crumbs from his breakfast loaf, and scattered them secretly on the deep windowsill of the scriptorium. Then birds would come, providing a blissful distraction for Theophane – and annoying his fellow monks.

And it wasn’t just the birds that distracted Theophane. Everything outside the window of the scriptorium begged for his attention.

A new task for Theophane

Finally, the eldest of the monks told Theophane that he needed a different task. He sent Theophane to make the brown ink that they needed for their work.

Perhaps that was meant to be a punishment. Theophane was solemn as he left the room – and then he skipped down the stairs. To him, it didn’t feel like a punishment. It was a relief to have something to do.

Theophane worked all night, boiling bark to make the dark brown ink his brother monks needed. And by morning, he needed more bark. He took baskets and went out to gather what he needed. Along the way, he managed to trip over his robes and fall into a blackberry patch. Because of course he did.

And of course he ate the berries. When he had eaten his fill, he realized that his fingers were stained purple. Which made him think – could he make purple ink? What else could he gather, what other colors could he make?

He gathered berries, leaves, blossoms, and roots, then raced back to the monastery. He worked all night, cutting and cooking, making inks in a rainbow of colors. And then he kept working. He didn’t make it to dinner. He didn’t make it to prayers. He didn’t even make it to bed. Instead, he spent the rest of the night creating beautiful, colorful pages, which he left on the desks of the other monks.

And at the end of the story, Theophane was no longer a copyist in the scriptorium. He was, instead, the monastery’s inkmaker. He tended a beautiful garden, where he grew the plants he needed to create the beautiful inks that his brother monks used to illuminate their manuscripts.

The writing and the art

Millen, the author of The Ink Garden of Brother Theophane, chose to write the story in verse. The decision seems to have been driven in part by her desire to include some snippets of verse based on real snippets that medieval monks wrote in the margins of their manuscripts.

Including the snippets of verse was a fabulous decision. I’m not sure that writing the whole story in verse was for the best. It might have been, if she’d written gentle iambic lines. But she chose the anapestic meter that Dr. Seuss used in so many of his books, and that George Gordon, Lord Byron used in The Destruction of Sennacherib. That rhythm seems too strong for The Ink Garden of Brother Theophane.

And, honestly, if you’re going to read the book out loud to a child, you need to read it through out loud once on your own, for practice. The rhythm clunks every here and there, in a way that Seuss and Byron never clunked.

But perhaps that’s too fussy a criticism for a genuinely delightful story. And perhaps the galloping anapestic beat will appeal especially to children who are like Theophane, children who are restless, and who are always looking for more.

Those children will find more, if they spend time looking at Andrea Wisnewski’s amazing illustrations. They will see birds and butterflies, flowers, and a fluffy black and white cat who seems to show up everywhere.

According to the blurb on the inside of the jacket, Wisnewski started each illustration by drawing the page, then cutting it out of the paper. She then had the papercuts made into printing plates. She printed each page, using a handmade press. Then she used watercolors to add the brilliant colors.

The result is absolutely gorgeous.

There are a handful of books explicitly about children with ADHD. This isn’t one of them. But children with ADHD will love Theophane. They will recognize themselves in him – the restlessness, the hyperfocus, the inability to meet expectations that everyone else meets easily.

And one of the things that they will see is that there’s nothing wrong with the way they are. Theophane wasn’t a bad monk. The eldest monk was right – he just needed a different job. And when Theophane got the right job, when he had the ability to work outdoors, in a garden, rather than inside at a desk, he blossomed as brilliantly as the flowers he used to make his inks.

The best picture books with disabled characters: All children need stories where the heroes have disabilities.

Magic in the Margins: A medieval tale of bookmaking: Another delightful story about a boy serving in a scriptorium in a medieval monastery.

The White Cat and the Monk:: This book is a retelling of Pangur Bán, a poem by an Irish monk who was visiting Germany some thousand years ago.