When Jesus was the guest of Zacchaeus the Publican 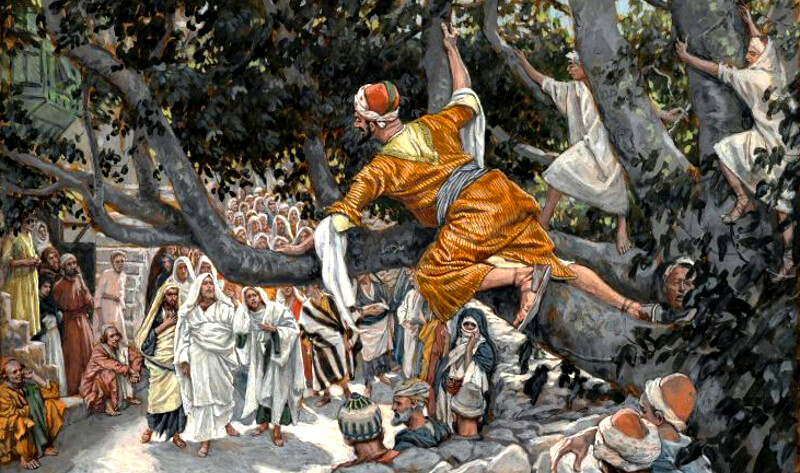 And maybe it’s because so many of us sang this song as children that we totally misunderstand who Zacchaeus was.

Zacchaeus wasn’t a nice man. He was a publican, a Jewish man who collected taxes for the Romans. The Romans were an outside occupying force. Most of the Jewish people considered the tax collectors to be traitors, turncoats, and collaborators. They hated them for that.

And if that wasn’t enough, they hated them for their cruelty, injustice, and greed. Nobody has ever liked to pay taxes, of course. But Roman taxes worked differently than ours do. The Roman government told the regional governors, “Your region needs to send this much money (or the equivalent in grain, wine, or other goods) to Rome.” The governors hired tax collectors like Zacchaeus to gather up that much in money and goods. Who the tax collectors took the money from, and how they took it, really didn’t matter. And if the tax collectors collected more than they needed to send to Rome, they got to keep the difference.

When a tax collector took up his post, he would hire some toughs, and start collecting. Their operation looked far more like a Mafia protection racket than like our own tax agencies. The tax collector could make an example of someone who didn’t cooperate, destroying everything they owned. They could take more from their enemies and less from their friends. They could function more like extortioners than like government officials. And tax collectors like Zacchaeus did exactly that. So people hated them for that.

The need for relationships

And so the tax collectors did what you’d expect. As much as they were hated, they were still people. And people need relationships with other people, as much as we need to eat and breathe. We’re made for connection and communion. When you shut people out, when you ostracize them, when you cast them out of the community, they’ll hang out with the other outcasts.

And that’s exactly what the tax collectors did. They had money, lots of money, so they could buy whatever they wanted. They could hire servants and prostitutes. And they could form their own little community, where they did as they pleased, regardless of what anyone else thought.

And people hated them for that, too.

Hanging out with sinners

And yet, Jesus called a tax collector, Matthew, to be one of his disciples. And Matthew was so grateful and happy to be recognized, and called, and welcomed, that he threw a dinner party. Who came to the party? Other tax collectors. Other wealthy, powerful sinners. And Jesus, who was the guest of honor.

Jesus went to the party to hang out with the extortioners and traitors, the unwelcome and the unclean. And the people who saw him go didn’t like it.

Maybe they wouldn’t have been so scandalized if Jesus had stood outside the door, calling out, “Matthew, repent!” But that’s not what he did. He went to dinner at Matthew’s house, as Matthew’s guest, because he loved Matthew.

Zacchaeus in the sycamore tree

Not long after that, Jesus was passing through Jericho. As always, he was surrounded by a crowd. And Zacchaeus, the tax collector, wanted to see him. He wanted to know who this person was who shared meals with tax collectors and sinners, with people like him.

Zacchaeus could have pushed through the crowd. He might have been short, but he was powerful. And he was unclean. People would have moved out of his way, to avoid touching him, to avoid being contaminated by him.

But he didn’t push through. He hung back. He decided to climb a tree, so he could see over the crowd. That was enough for him, just to see this man who would hang out with tax collectors.

Jesus saw him in the tree. And Jesus knew who, and what, he was. And he said, “Zacchaeus, come down! I’m going to eat at your house tonight!”

So Zacchaeus did what Matthew had done. He threw a dinner party, with Jesus as the guest of honor.

And the people who saw him go didn’t like it.

Maybe they wouldn’t have been scandalized if Jesus had stood outside the door, calling out, “Zacchaeus, repent!” But that’s not what he did. He went to dinner at Zacchaeus’s house, as Zacchaeus’s guest, because he loved Zacchaeus.

You know the rest of the story. Zacchaeus was so moved by Jesus’s love that he restored everything he had stolen fourfold, and gave half of everything he owned to the poor. He gave up his work as a tax collector entirely, when Jesus chose him as one of the Seventy. He traveled with St. Peter after our Lord’s Ascension, and St. Peter made him the first Bishop of Caesarea.

The other tax collectors

And what of the other tax collectors? Jesus loved them, too. He knew they had been cast out of the community. They wouldn’t come to him. So he went to them. He hung out with them, shared meals with them at their homes. He did it often enough that the people who saw it complained.

As for us? The story of Zacchaeus in the Gospel tells us where we are. We’re standing in the temple, praying with ourselves, saying, “Thank you, God, that I’m not like all those other people. I’m not like them.”

When He that bowed the Heavens came to save sinners, Zacchaeus, great in zeal, but little of stature, beheld the Tree of Life from in the sycamore; lifted above the earth, he saw Jesus, Who called him: coming down in lowliness, he repenting, received Him; and so salvation came into his house, and he was shown forth a true son of Abraham.

May God have mercy on us, through the prayers of St. Zacchaeus.

In this family, we don’t judge: In Luther’s Small Catechism, God gave me a word. It may take me my whole life to learn how to keep it.

Christine, who fasted during the fast-free week: During the week following the Sunday of the Publican and the Pharisee, we don’t fast. But some people always fast, because they have no choice.