King for a Day: A Picture Book for Basant 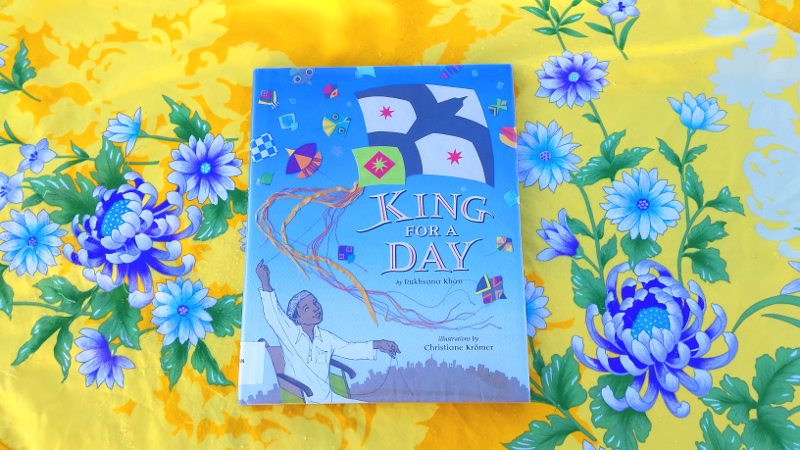 In King for a Day, a picture book by Rukhsana Khan, a boy named Malik takes part in the kite-flying festival of Basant. He’s created a small, speedy kite that he calls Falcon. He hopes he can use it to snag all the other kites out of the sky. If he can, he’ll be King of Basant.

Malik goes on throughout the day taking down kite after kite. He uses a wheelchair, but when you’re flying kites from a rooftop, that doesn’t matter. The skills you need to design the kite, and to fly it, don’t depend on the ability to walk or run.

By the end of the day, Malik has collected a stack of kites. But even after the kite-flying is over, the bully still feels a need to push a little girl around. And Malik knows just the way to respond.

She thought at first that she’d do it in the style of Moghul miniatures that she had seen at an exhibition at the Metropolitan Museum of Art. But she ended up using collages of paper and fabrics. The Moghul miniatures are still there, though, in the archways that appear in the book from beginning to end.

Basant is a festival that is held each year on the fifth day of spring according to the Hindu calendar. It’s celebrated in different ways depending on where you live. Everywhere, though there are parties and music, bonfires and fireworks. People wear brightly colored clothing, especially yellow and green. Homes are decorated with flowers. Parties are held on the rooftops. And people fly kites.

In Lahore, Pakistan, however, where King for a Day is set, kite-flying is no longer allowed on Basant. Kite flyers often used string made from metal or covered in powdered glass, to make it easier to cut other kites out of the sky. Those kite strings could connect with power lines, too, though, making them terribly dangerous. In 2003, 2 people died and more than 100 were injured during the kite-flying festival. There were also religious conflicts related to Basant. The back matter in the book says that kite flying was allowed in 2013, but that changed between the time the book was published and when Basant arrived that year.

This year, Basant falls next week, on January 22. If not in Lahore, in other parts of India, and especially in Punjab, people will be flying kites.

Hello Goodbye Dog: A little girl’s dog loves to say hello and hates to say goodbye. The girl uses a wheelchair, but that’s not the focus of the story. The focus is her relationship with her adorable dog.

Wheelchairs and Sidewalks: How do you get around in a wheelchair when sidewalks are broken or blocked? It’s not easy.