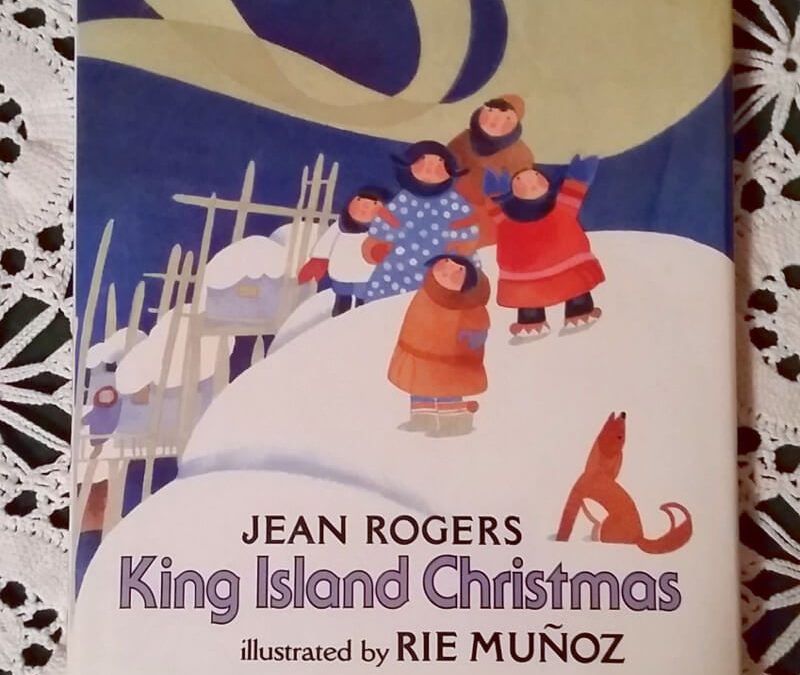 There is so much going on in King Island Christmas, and so many reasons you need to get it, that I hardly know where to begin.

King Island Christmas is based on events that occurred in the winter of 1951. Rie Muñoz and her husband were teachers at the school that the Bureau of Indian Affairs operated in the tiny village on King Island.

The Last Ship Before Winter

The village church had been without a priest for many months. As the story begins, a freight ship has arrived at the island, bearing a new priest. But the winds and the waves make it too dangerous for the men of King Island to go to the freighter in their small walrus-skin boat to get their priest.

It’s the last ship that will arrive at King Island before the winter ice sets in. If they can’t get their priest off the ship, he will have to leave and return in the spring.

King Island Christmas is a delightful story full of cooperation and determination. And, of course, it ends happily, with the new priest celebrating Christmas in the village church.

A Bit of History

I’m not sure when or why Rie Muñoz decided to tell the story of that King Island Christmas. Maybe she had always wanted to tell it, when she got the chance. Maybe she decided to tell it when she learned that the school she had taught at had been closed, and all the Alaskan Native kids had been taken to the mainland, whether they wanted to go or not. And without their children and teens, the adults left on the island couldn’t get enough food put by during the summer to last the village through the winter. So the village had become a ghost town.

But whatever the reason, and whenever she decided to tell the story, there was a difficulty. Muñoz was an artist, not a writer. At some point, her friend Jean Rogers agreed to create the book with her. Rogers would write the story, and Muñoz would illustrate it.

Rogers told the story well. And the illustrations! Oh, my word. They are everything you’d expect from a children’s book set in Alaska and illustrated by a celebrated Alaskan artist.

Muñoz lived in Alaska from 1951 until her death last year, on Monday of Holy Week, at age 93. She loved everything about Alaska – but most especially, she loved the people of Alaska, and it showed. Her paintings capture Alaskan people doing Alaskan things. They depict everyday life: walking to church, picking berries, hanging laundry, drying salmon. They are whimsical and exuberant. And the illustrations in King Island Christmas are all classic Muñoz.

The Only Thing Lacking

The only thing that the book is lacking is author notes. It would mean so much, in a book like this, to have more of the history and the context. (And that’s especially true for teachers and homeschool families, who may want to use this book as part of a lesson on Native Alaskan history and culture.)

It’s true that, today, anyone who really wants the context can use the Internet and dig it out. But in 1985, when the book was published, finding out more about King Island and its village and people and way of life would have required research skills and a trip to a major library.

Sadly, King Island Christmas has been out of print for many years. But used copies are still available, and not too difficult to find. If you look for it online, you’ll find copies. You’ll also find out about a musical based on the book, which sounds absolutely delightful.

If I ever get a chance, I want to attend that musical. If you get a chance, you should get a copy of King Island Christmas. It deserves a place on your bookshelf.