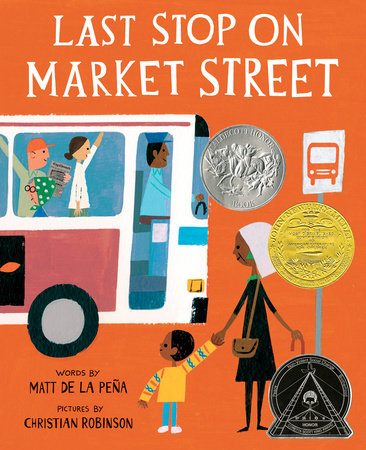 On this particular Sunday, CJ is in a grumpy mood. He complains relentlessly. About the rain. About the bus. About what he wants but doesn’t have. And gently, but no less relentlessly, his grandmother responds by pointing out the goodness all around them.

The spell of CJ’s bad mood is broken when a fellow passenger pulls out his guitar and begins to sing. The music “lifted CJ out of the bus, out of the busy city … he was lost in the sound, and the sound gave him the feeling of magic.”

And then they reach their stop, the last stop on Market Street. From the bus stop, they walk down a dirty street with “crumbling sidewalks and broken-down doors, graffiti-tagged windows and boarded up stores.” And yet, over the street is the arc of a rainbow, a beautiful sign of God’s promise.

As they reach their destination, the place and the people are familiar to CJ. This is a journey he and his grandmother take every week. They leave the church to feed the world.

And CJ is glad that he came.

The Joy of Words

Matt de la Peña’s story is not told in verse, but it’s easy to argue that it’s pure poetry. The author plays with the sounds of words.

He creates striking images, and even more striking reversals. For example, when CJ’s grandmother says their bus is a fire-breathing dragon, the dragon-bus “creaked to a stop in front of them. It sighed and sagged and the doors swung open.”

Here and there, he drops in a rhymed couplet, just for the joy of it:

He looked all around them again,
at the bus rounding the corner out of sight
and the broken streetlamps still lit up bright
and the stray-cat shadows moving across the wall.

The acrylic collage paintings by Christian Robinson that illustrate the book are bright and blocky, simple without being simplistic. They might remind you of Ezra Jack Keats’s Snowy Day.

It’s no surprise that Robinson’s illustrations won the Caldecott Honor for The Last Stop on Market Street. What is surprising is that the book also received the Newbery Medal.

Each year, the Newbery Medal is awarded for the most distinguished contribution to American literature for children up to age 14. Usually, the award goes to books for children at the older end of that age range. Books that tell a story crafted in words. Lots of words. Beautiful, evocative words.

Like all true picture books, The Last Stop on Market Street tells its story through an interplay of words and pictures. Neither is complete without the other. And that may be why it is only the second picture book ever to receive the Newbery Medal. (The first was A Visit to William Blake’s Inn, which received the award in 1982.)

Besides the Caldecott Honor award and the Newbery Medal, the book was also named a Coretta Scott King honor book.

All of these awards are richly deserved.