Magic in the Margins: A Review 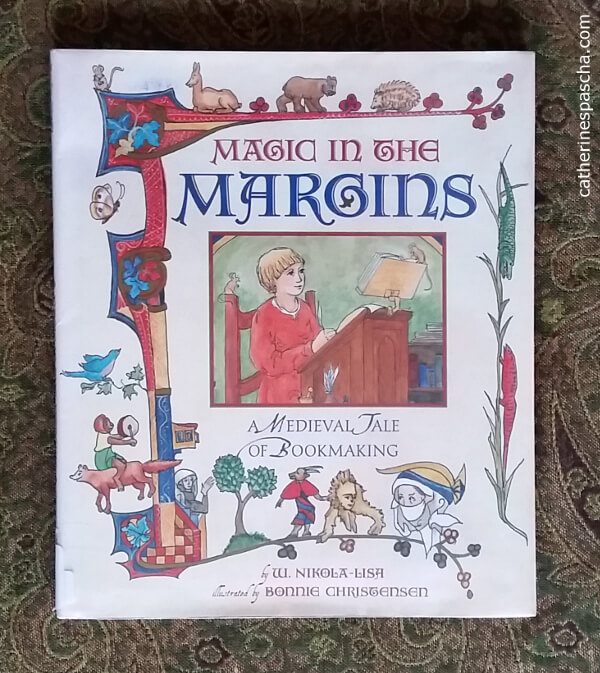 Magic in the Margins is the story of Simon, an orphan, “the son of peasants who perished in the spring floods.” He is taken in by a monastery, where he serves in the scriptorium. He soon becomes an apprentice to the master scribe. He quickly learns how to do all the tasks the master gives him. But he wants to do one task that he hasn’t been given. He wants to illustrate the manuscripts that the abbot is creating.

The abbot tells Simon that he can begin work as an illustrator when he can capture mice. So Simon sets out to capture the mice that plague the monastery – and the results are not what the abbot expects.

Mice in Ink and Egg Tempera

Bonnie Christensen’s illustrations, like the monastery, are full of mice. Mice in the bookshelves. Mice in the corners. Many children will enjoy finding the mice as much as they enjoy hearing the story.

The story, by W. Nikola-Lisa, was inspired by an illustration from a twelfth century edition of St. Augustine’s City of God. “The illustration,” Nikola-Lisa tells us in the preface of his book, “is of a scribe, Hildebertus, who spies a ‘pesky mouse’ stealing his cheese. Pictured below the irritated Hildebertus is a young apprentice, who continues to paint border designs on a scrap of parchment, oblivious to Hildebertus’s annoyance.”

Nikola-Lisa wodered who that apprentice was, and how he came to the monastery. But there were no answers to be found. So Nikola-Lisa did what any good storyteller does, and made up his own answers. And I, for one, am glad he did!

The Boy, A Kitchen, and His Cave: A Review: Like many Orthodox women, I have an icon of St. Euphrosynos the Cook in my kitchen. This book tells his story.

Pascual and the Kitchen Angels: A Review: In Tomie dePaola’s retelling of a folk tale, St. Pascual wanted to join a monastery so he could help feed the poor. The monks told him he could be their cook, but Pascual didn’t know how to cook. So he prayed, and the angels did the cooking.