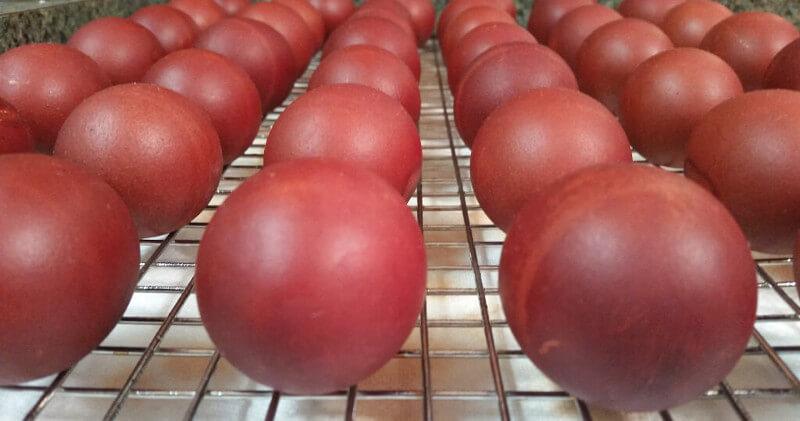 Orthodox Christians make beautiful deep red eggs for Pascha. It’s an ancient tradition, perhaps going back to the time of the apostles. The eggs, along with meat and cheese and wine, are brought to church in baskets.

The baskets are blessed at the end of the Paschal services. During the festivities that follow, many people play the game that Catherine plays in Catherine’s Pascha: hitting the red eggs together to see which one breaks.

So why are Pascha eggs red? The truth is that nobody knows for sure. They just are.

But if you don’t like that answer, there are plenty of others!

Mary Magdalene and the Emperor Tiberius

My favorite story about the origin of the red eggs involves Mary Magdelene. It is said that, when she went to Rome, she arranged an audience with the Emperor Tiberius. As she spoke about Jesus, about his death and resurrection, she picked up an egg from the table. Perhaps she used it to illustrate the stone that had sealed the tomb. Perhaps she was just fidgeting with it.

Whatever the reason, she was holding the egg and telling Tiberius about the Resurrection. And at that point, Tiberius had had enough: “A man can’t come back from the dead any more than that egg in your hand can change from white to red!” And as he spoke those words, the egg in Mary’s hand changed from white to red. Mary held the egg up for all to see, saying, “Christ is risen from the dead!” And so, in honor of her, and in honor of the Resurrection, Christians have dyed eggs red at Pascha ever since. So that’s one story.

The history of Pascha eggs

It appears, from historical sources, that eggs were first dyed red at Pascha by Christians in Mesopotamia, perhaps as early as the second or third century. From there, the tradition spread to Greece and then throughout the Christian world.

At that time, Ukraine already had a strong and ancient tradition of making intricately decorated eggs, called pysanky. When the tradition of making red eggs for Pascha arrived in Ukraine, people did not quit making pysanky.  Instead, they adapted their existing customs into the celebration of Pascha. You can learn to make pysanky, but it’s a lot easier to make red eggs using onion skins!

How to make red Pascha eggs

It’s easy to make traditional red eggs for Pascha using onion skins and vinegar. These natural ingredients are safe, and they make eggs that are a beautiful deep rich red.

* You can save onion skins all year. Keep them in a zip-top plastic bag in the cabinet or freezer. A gallon bag full of onion skins makes plenty of dye for a batch of eggs. If you didn’t save the skins, just ask the folks at the produce department at your local grocery if they’ll give you a bag of onion skins.

Next, make the onion-skin dye

Celebrating Pascha: The Queen and Lady of Days: Pascha is the Feast of Feasts, the Holy Day of Holy Days. Christ is risen!

Pascha baskets and Pascha basket covers: Carrying heavy wicker baskets of food to Church for Pascha is an ancient and beloved tradition.