The Miracle of Saint Nicholas: A Review 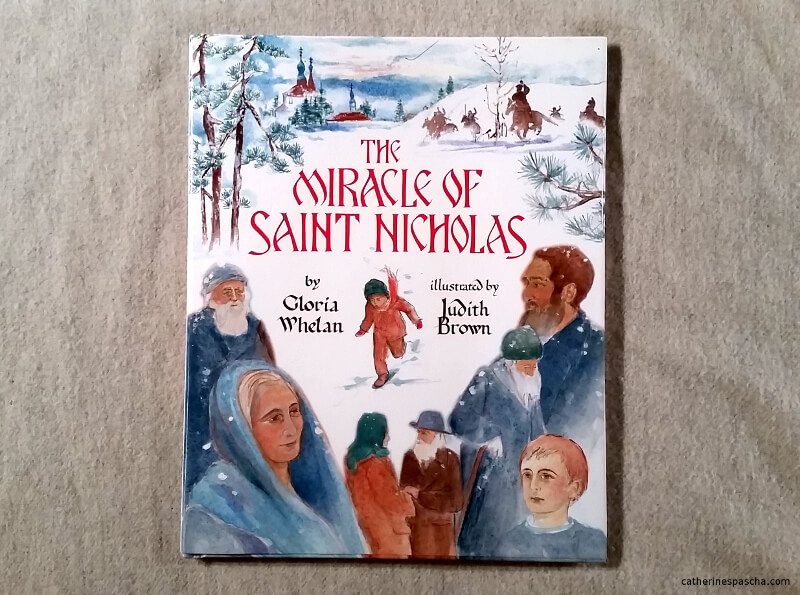 There’s a lot that’s wonderful about The Miracle of Saint Nicholas.

The story is set in the small Russian village of Zeema sometime after the fall of the Soviet Union. It’s Christmas eve. The village church, the Church of St. Nicholas, has been closed for 60 years. A child named Alexi is talking with his grandmother about what Christmas was like when she was young, before the soldiers came.

In those days, the village church was the heart of Christmas celebrations. But then soldiers came, and closed the church, threatening arrest and exile and worse for anyone who dared enter it. And ever since, the church has been silent and empty. Only dust and mice and nesting birds make their way into it.

But the soldiers are gone now. Alexi wants to know why they can’t celebrate Christmas at church.

His grandmother explains that they would need many things to have a Christmas service: bread and wine, candles, a cross, an icon of St. Nicholas. And most of all, a priest. To gather these things would take a miracle.

The Miracle of Saint Nicholas

So Alexi begins preparing for a miracle. When he goes to the church, he finds that the church door is unlocked. He frightens the mice from the church, sweeps away dust, clears out cobwebs and bird nests. He brings in pine branches from outdoors and lays them around the altar.

The people of the village see what he is doing. They watch him, and think of secret things, and leave.

And so Christmas is celebrated in village of Zeema, in the church of St. Nicholas, just as it had been when Alexi’s grandmother was a child.

The Miracle of Saint Nicholas is a wonderful story, so well told that children are entranced and grownups cry. And the illustrations, which Judith Brown created using egg tempera, are soft and lovely, with just a hint of Russian iconography about them.

The author, Gloria Whelan, does a masterful job of weaving the village’s history into the story. There’s just enough, but not too much. In particular, the scary part – the soldiers coming to the village, closing the church, threatening arrest and exile and worse – is serious enough for older children without being too frightening for their younger siblings.I was reminded of the way Jeanette Winter handled a similar historical situation in Nasreen’s Secret School. Between that and the grandmother’s role in the story, the parallels between the two books are strong enough to make me think Winter must have read and been influenced by The Miracle of Saint Nicholas.

I love the way Alexi decides not to simply wait and hope for a miracle, but to do what he can to prepare for it. That’s beautiful and powerful.

And for Orthodox Christian children, The Miracle of Saint Nicholas offers the rare gift of a story that shows their faith. It shows Orthodox people celebrating a Great Feast in church on Christmas morning, with candles and icons and a priest. When it seems that every other Christmas book is about the parts of Christmas that are tangential for your family, and the heart is missing, having a book that lets a child see others celebrating as they do is a very, very good thing.

All of that goodness can’t be denied. In fact, in a way, the goodness makes the flaws in The Miracle of Saint Nicholas more problematic than they would have been in a lesser book. And the book is seriously flawed.

If you’re not Orthodox, you might not even notice what’s wrong. But Whelan simply didn’t know enough about Orthodox liturgical practice when she wrote her book. And she didn’t make the effort to get it right.

Of course, Alexi has never been in the church. He’s never seen a service. So that can be excused as Alexi’s ignorance. But the schoolteacher, who brings the altar cloth and spreads it over the altar, would not have been ignorant. And she would not have taken the altar cloth through the iconostasis herself. She would have given it to a man, probably one who had been a reader or a deacon before the church was closed.

And then there’s the holy Christmas bread.

There’s no such thing.

We have holy bread at every Divine Liturgy, and someone in the parish bakes it and brings it. That much is right. But it’s not Christmas bread. It’s Communion bread. If a litya had been served the night before, perhaps a bit of artistic license would have allowed calling the litya bread “holy Christmas bread.” But not the bread for the Eucharist.

And some children might notice what’s missing. The villagers bring no chalice, no paten, no chalice covers, no aer, and no antiminsion. These aren’t small things. They are essential for celebrating the Divine Liturgy. You could celebrate without candlesticks and without an altar cloth. But you have to have a chalice and paten. And the priest can’t celebrate without the antiminsion.

You can explain these things away to a child who asks, by saying that there were many villagers in the church, and so some of the things that they brought simply weren’t mentioned.

But there’s no way to explain the holy Christmas bread. It’s just too weird. As soon as a child notices that, the Christmas magic, the gift of a story about other Orthodox Christians celebrating Christmas at church, becomes a little less magical.

In spite of the flaws, I do think The Miracle of Saint Nicholas is a wonderful story, and I wouldn’t advise against getting it for a child. Just know that it’s not everything you hope for, and be prepared to explain that authors sometimes make mistakes. Especially when they’re writing about a faith or a culture that isn’t their own.