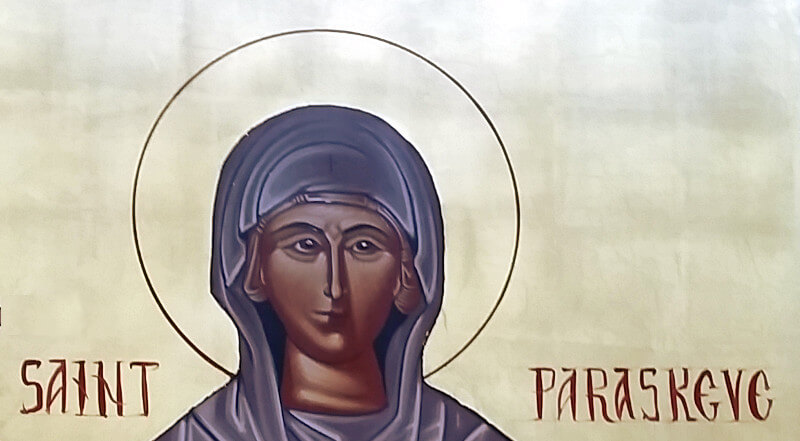 I wanted to write about St. Paraskevi today. She’s the patron saint of the blind (which you’ll understand when you read her story). As my vision is becoming increasingly impaired as a side-effect of surgery I had in March to fix my vision, I’ve been asking St. Paraskevi for her prayers. But some days I’m finding it difficult to write, and I knew I wasn’t going to get anything written for today. So my sweet husband, Alex Riggle, said I could share the entry for today from the collection of saint stories he’s working on. It includes both St. Paraskevi and Ss. Joachim and Anna, whom we both love very much. I hope you enjoy it.

On this date in 1745 [sic], the first recorded women’s cricket match took place near Guildford, England. Contrary to popular belief the bowler for the home team was actually very personable and was not referred to as “the wicket witch.”

Parasceva (ca. 140–ca. 170) (aka Paraskevi) was born to Greek parents in Rome. One source says, “her father, Agathon, was rich, and her mother, Politia, had many attributes,” including “charitability” (a new word for me). Parasceva was a devout Christian, spending her time in prayer and in the study of the Holy Scriptures. When her parents died she gave all her money to the poor and took up with a community of young virgins and widows, where by “took up” I mean “became the head of.” After about ten years of this she hit the bricks as an itinerant preacher, converting pagans to Christ left and right (or sinister and dexter).

This of course led to her trial before the emperor and various tortures, including having a red-hot, spike-lined helmet forced onto her head. She emerged from each round unscathed, which converted bystanders, who were beheaded. When she suffered no apparent harm after being tossed into a cauldron of boiling goo, the emperor peered into the cauldron and accused her of sorcery. She splashed some of the goo in his face (perhaps with an, “Oh, you silly goose”), blinding him. He begged for mercy, and she healed him, making it quite clear he was submitting to the God of the Christians. He set her free, and laid off the persecution thing.

When the emperor passed the baton (“Mornin’ Sam”—“Mornin’ Ralph”), his re-placement resumed the anti-Christian stuff, and Parasceva found herself tried and found guilty and tossed into a pit with a great snake (not a dragon? darn!), which she killed by making the sign of the cross. The governor and the locals saw this, converted to Christianity, and set her free.

At her next (and final) trial, she answered every question or command they put to her with the word, “Christ.” After a couple of unsuccessful attempts to kill her by torture (including more goo and hot boulder therapy), they led her into the temple of Apollo, where she destroyed all the idols by making the sign of the cross. That was the cross that broke the idol’s back. She was summarily beheaded.

Joachim and Anna (I cent. BC(E)) were the parents of the Blessed Virgin Mary, who was born to them in their extreme old age (one source suggests Anna was 40!). Sometime before that, Joachim’s offering was refused by the priest at the temple in Jerusalem. He (the priest) reasoned that anybody who was childless at Joachim’s age must be unworthy to offer young rams unto the Lord. Joachim was crushed, took the priest’s condemnation to heart, and withdrew to the proverbial lonely place (no, not the “Heartbreak Hotel”). Back in town, Anna heard about her husband’s disgraceful disgrace, and separately they prayed together and fasted, asking God to give them a child.

Angels appeared to both of them (either different angels or the same one in rapid succession) (can angels travel faster than light?) telling them that their prayers had been heard. In joy Anna ran down to meet Joachim as he returned to town, and in short order they did something or other that resulted in the birth of a girl some 40 weeks later. According to holy tradition, Anna lived long enough to see Jesus born, and Joachim long enough to see Him dedicated in the temple on Candlemas (Feb 2). Although he wouldn’t have called it that.

Relics of St. Anne are said to be in Istanbul (Turkey), Duren (Germany), Apt-en-Provence (France), and Canterbury, Durham, and Reading (England). Interestingly, the cultus of St. Anna was particularly despised by Martin Luther, who really, really hated images depicting her with Mary and Jesus. We have no official word about how Anna feels about Martin, but I think we’re on pretty safe ground if we suppose that she doesn’t hold it against him.

If you’ve heard anyone say “Is outrage!” or “Was it such-and-so in Ninteenth Century Russia?” in a fake Russian accent, you have my husband, Alex Riggle, to thank (or to blame). Those lines belong to Father Vasiliy, the irascible priest from Alex’s blog, The Onion Dome. All of the blog posts featuring Father Vasiliy have been collected in a book, Is Outrage!.

St. Elizabeth the Dragon Slayer: When the king gave the abbess a piece of land infested with dragons, what was she to do?

The Story of Mary the Mother of God: A Review: This lovely picture book is based on portions of the Protoevangelium of James. It includes the story of Joachim and Anna.

Father and Son: A Review: St. Joseph is my patron saint, and this picture book reads like devotional poetry written in his honor. Children will enjoy it, of course. But so will you.