Passage to Freedom: A Review 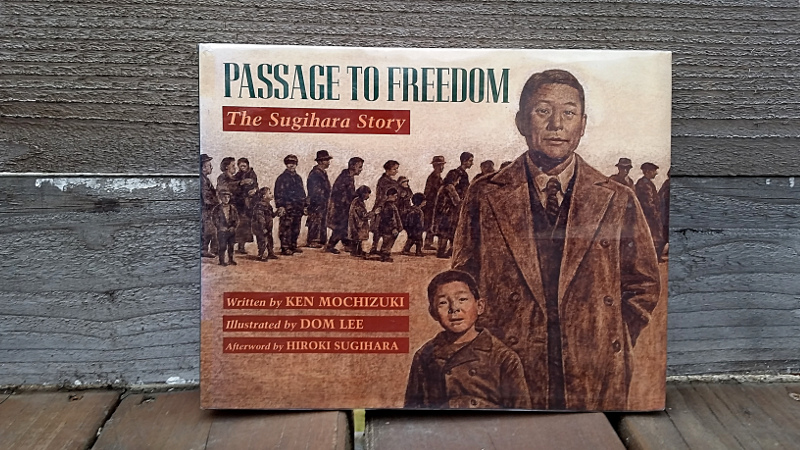 Today is Bright Tuesday. It’s also Holocaust Remembrance Day: Yom HaShoah in Hebrew. On this day, we’re still singing “Christ is risen from the dead, trampling down death by death,” and on this day we remember deaths, so many deaths. Today the calendar takes the celebration of light and joins it to the memory of darkness. Today our hearts are filled with joy and with horror.

That’s why we need to know the story of Chiune Sugihara.

Chiune Sugihara of blessed memory has not yet been glorified as a saint of the Orthodox Church, although I believe that he will be. In 1985, Israel named him one of the Righteous Among the Nations. Sugihara is also the subject of Passage to Freedom, a picture book written by Ken Mochizuki and illustrated by Dom Lee.

Passage to Freedom is a fabulous book in every respect. Let’s talk about the illustrations first. They are magnificent. To create them, Lee used a technique I’d never heard of before. He applied beeswax to paper, and when it hardened, he etched the images into the wax. Then he used paints and colored pencils to complete the work. The final illustrations look like old sepia-toned photographs.

These pictures are warm and human. Yet they create a sense of distance between the viewer and the events depicted. For a book introducing the Holocaust to young children, that distance is, I think, a good thing. If the illustrations had been worked in vivid colors, if they created a sense of immediacy, I think the story could have been too difficult for a sensitive child to bear.

Mochizuki’s story also keeps the horrors at arm’s length. It is told from the point of view of Hiroki Sugihara, Chiune’s son, who was five years old at the time of the story. Hiroki didn’t understand all of the horrors of the Holocaust. He only knew what his mother told him: that if his father didn’t help the Jewish refugees, then bad men would kill them.

But do get Passage to Freedom, too. It’s a wonderful book.

And a wealth of material is available to help you use the book to teach your children about the Holocaust, and about Chiune Sugihara of blessed memory. There are discussion guides, activities, even a documentary on PBS.

And there is an icon and a troparion, if you should be inclined to use them in your personal devotions. He died on July 31, 1986, so, should he be canonized in the future, July 31 will be his feast day.

St. Alban, Protomartyr of Britain and Patron of Refugees: St. Alban was a Roman soldier who protected a Christian priest fleeing persecution.

Orthodox Saints of World War II: As Orthodox Christians, we look to the saints to guide us and to show us by their examples the Christian response to the events in our lives and in our world.

Silent as a Stone: A Review: This picture book tells a story from the life of Mother Maria of Paris, who saved Jewish children from the hands of the Nazis, by taking them out with the trash.