Looking for the real St. Nicholas 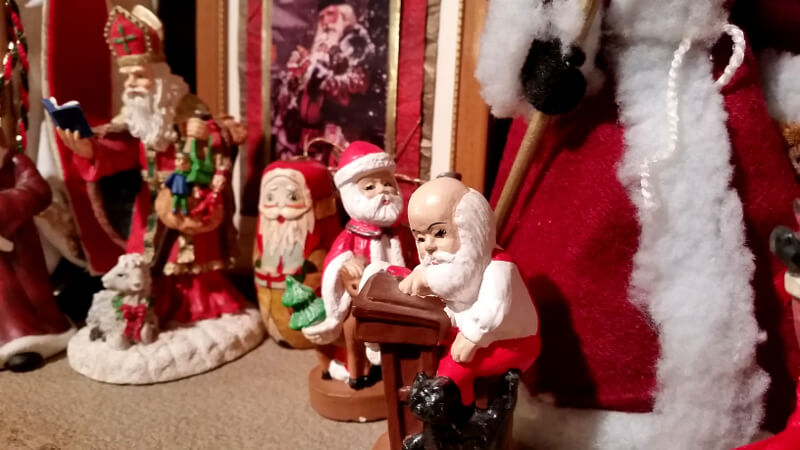 The stores are already filled with ornaments and decorations that feature a man with a big white beard, dressed all in red. He might have children with him, or a bag of toys. There might be Christmas trees in the background. There might be elves. Who is this man? How can you tell if he’s the real St. Nicholas?

Symbols of the real St. Nicholas

In an Orthodox icon, St. Nicholas will be wearing a bishop’s stole (omophorion if you speak Greek, pallium if you prefer Latin). He’ll hold a Gospel in his left hand, and his right hand will be raised in blessing. He’ll usually have white hair, a neatly trimmed beard, and a receding hairline. And he’ll be bare-headed. Some people say that he has a bare head because his miter was taken away after he slapped Arius. But St. John Chrysostom, St. Basil the Great, and other bishop-saints are typically shown bare-headed as well, and they never had their miters taken from them.

And, of course, his name will be written on the icon. That’s a necessary element of an Orthodox icon. Because church imagery in the Western church tended towards statues, they don’t have the same custom. In Western art, as far as I can see, he’s always shown with a miter and crozier, and often with the Gospel as well. But the stole and Gospel and miter and crozier only tell you that the image is a bishop.

Other elements in the image signify that this bishop is St. Nicholas. Usually, these other elements reference well known stories from the life of the saint.

For example, if you see a bishop-saint holding three gold balls on top of his closed Gospel book, it’s St. Nicholas. The balls can also be on his lap, on the ground, or anywhere else in the image. Wherever you find them, these balls represent the three bags of gold that St. Nicholas gave to the widower’s three daughters. They’re also the reason that pawnbrokers use three gold balls in their signs, and why parents put oranges in children’s stockings.

If the image includes three boys or three young men, the artist meant you to think of other stories. If the boys are in a barrel or tub, it’s a reference to a legend in which St. Nicholas saves three boys who had been butchered by an evil innkeeper. If the boys are a bit older, the image is telling the story of the three innocent men that St. Nicholas saved from execution.

There are many stories of St. Nicholas saving sailors from storms, so there are also many icons and other images showing St. Nicholas with a ship foundering in a storm. He might be on the ship manning the sails, or walking on or flying over the water. Occasionally, though, the reference is more subtle – an anchor, a small ship in the background, or a child holding a toy ship. In any case, a bishop with a ship is almost certainly the real St. Nicholas.

Sometimes you’ll see images of St. Nicholas with sheaves of wheat. These may represent the many times that St. Nicholas delivered people from famine. But since the images are mostly from Ukraine, I suspect they’re related to the Ukrainian custom of bringing sheaves of wheat into the house on Christmas eve.

When you have a lavishly illustrated book like The Saint Nicholas Day Snow, you and your children will want to spend as much time with the illustrations as you do with the story.

Spend some time talking with your children about the different ways you might recognize an image as the real St. Nicholas. Then look through the book, focusing on the images of St. Nicholas. Which symbols are incorporated into each image?

Some of the images don’t include any of the usual symbols. These images may be details from larger works, or they may be so old that the symbolism hadn’t yet solidified. If you don’t see any of the expected symbols, how would you know that the image was St. Nicholas?

St. Nicholas on Charlotte’s blog: Browse through stories from the life of St. Nicholas, along with crafts and activities celebrating this favorite saint.

Vasily and the Dragon: A review: St. Nicholas is a minor, but essential, character in this Russian folk tale.

The Baker’s Dozen: A review: In this American folk tale, a baker learns a lesson about generosity.

For even more information about the real St. Nicholas, be sure to visit The St. Nicholas Center. It’s a comprehensive online resource to everything related to our beloved saint!