The Righteous King Tamar of Georgia 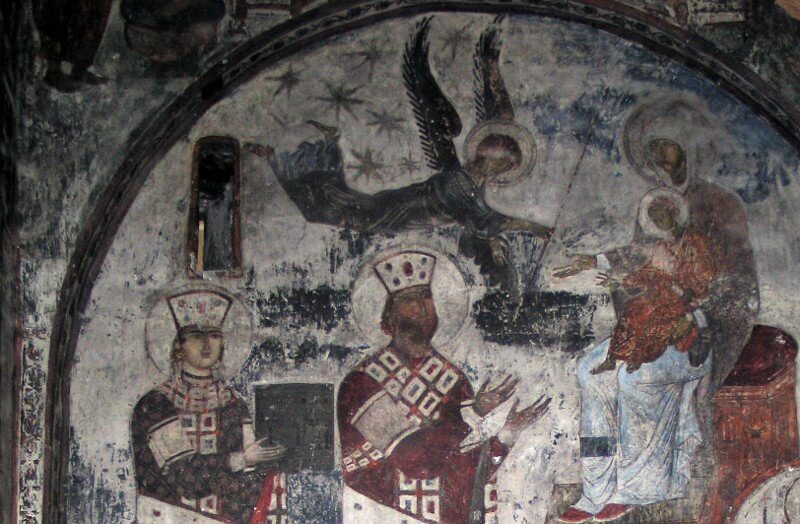 During her life, St. Tamar of Georgia styled herself, “By the will of God, King of Kings and Queen of Queens of the Abkhazians, Kartvelians, Arranians, Kakhetians, and Armenians; Shirvanshah and Shahanshah; Autocrat of all the East and the West, Glory of the World and Faith; Champion of the Messiah.”

But years before she was the Glory of the World, she was the only child of King George III. King George was a responsible king, and he was worried about what would happen to his country on his death. So when Tamar was 18 years old, George made her his co-ruler.

The Reign of King Tamar of Georgia

For six years, Tamar ruled by her father’s side. On his death, in 1184, she assumed the throne. There wasn’t a word in the Georgian language for a woman monarch, because there had never been such a thing. So she took the title mep’e, king.

Some people refer to her as Queen Tamar, and that’s fair enough. Because English has a word for a woman monarch, there’s no harm in using it. But if you look at the way she styled herself, I think she would have preferred to be called a king.

There were nobles in Georgia who didn’t like the idea of having a woman king. So the first thing Tamar had to do after her father’s death was deal with a bunch of powerful men who wanted to take her kingdom from her.

Of course, her father had had to deal with uprisings and rebellions, too. His response was to kill them all. But Tamar was not inclined to kill without need. And, honestly, she probably didn’t have the power at first to win if she’d gone to war with her nobles. So she took her time, and managed to stalemate them for a while. She made concessions here and there, appointing the Patriarch as her chancellor and marrying Yuri, a prince whom the nobles picked out for her.

Prince Yuri turned out to be a drunk, and her chancellor used his position to make himself, he thought, the most powerful man in Georgia, at the top of both the secular and religious hierarchies.

Nobody lives forever, though, and the patriarch wasn’t chancellor more than a year or two before he died. Then King Tamar divorced and exiled her husband and appointed a new chancellor, one who was loyal to her. And she picked out her own husband, David Soslan. He was exactly what she needed, a skilled military commander who was devoted to her.

When her first husband raised an army and came back to Georgia to take the kingdom back from his ex-wife, he had to face Tamar’s armies, under the command of Tamar’s husband. And Yuri lost. He did it again. And lost again.

In 1203, the Sultan of Rum amassed armies along the Georgian border and sent an envoy to Tamar. The message was simple. Women are weak and simple-minded and not fit to run a country. Therefore, she could surrender to him, convert to Islam, and be his wife, or she could surrender, stay a Christian, and be his concubine.

Tamar wasn’t impressed. One of her nobles punched the envoy, knocking him out cold. When he came to, Tamar loaded him with gifts, and sent him back to the sultan with an envoy of her own. Her envoy told the sultan that God was in charge, not him. The Sultan’s armies attacked. And lost.

It’s clear that King Tamar of Georgia was a powerful leader. But why was she glorified as a saint?

She was a generous supporter of churches and monastic communities, not only in Georgia, but throughout all Christian lands.

When the sultan Saladin defeated the Crusaders and took control of Jerusalem, King Tamar asserted herself as the protector of the Christians of the Middle East. She tried to ransom the True Cross, and she negotiated for the return of valuables that Saladin’s forces had looted from Georgian monasteries. Saladin’s biographer says she didn’t get the Cross, and nobody knows whether she got the monastic goods returned or not. But according to the Bishop of Acre, she gained for Georgian pilgrims the right to enter Jerusalem freely, with their banners unfurled. No other Christians at the time had that privilege.

She was fervent in prayer, fasting, and almsgiving. And while she dressed herself in royal finery during the day, and surrounded herself with luxury befitting her role, she spent her nights praying barefoot, and she slept on a stone bed.

And King Tamar abolished the death penalty and all forms of bodily torture in her kingdom.

Having served the King of kings diligently on earth, O Tamar,
Queen of great renown,
Thou didst enter with honor into the heavenly Jerusalem
And didst bring to Christ thy glory as a gift;
Wherefore, celebrating and joining chorus today, with joy we unceasingly cry:
Glory to Him Who hath given thee glory!
Glory to Him Who hath crowned thee!
Glory to Him Who granteth unto all the fullness of forgiveness by thine intercession!

The Lord’s Wise Handmaiden: St. Melania the Younger didn’t want a husband, and she didn’t want a fortune. Her father insisted on making sure she had both.

St. Brigid’s Cloak and Blueberry Jam: The King of Leinster made the mistake of laughing at Brigid. He shouldn’t have.

St. Placilla the Empress: Placilla understood the power she had as Empress consort. There was nobody who could tell her what to do. She did as she pleased. And when it mattered to her, so did her husband.