Saint Francis and the Wolf: A new telling of an old story 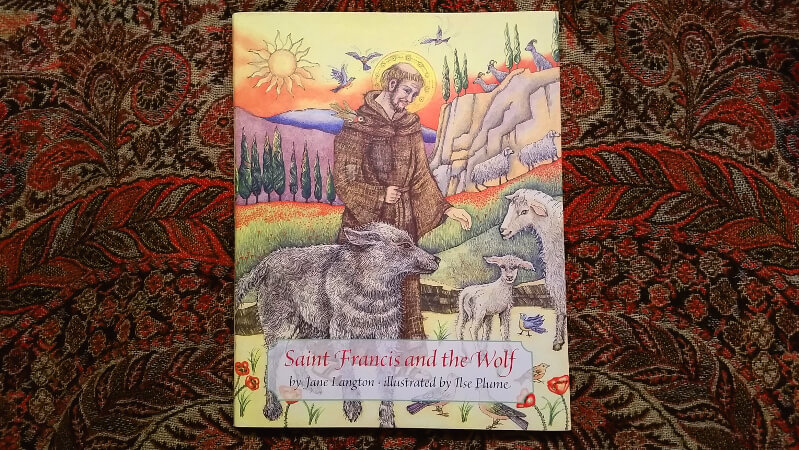 Saint Francis and the Wolf is Jane Langton’s lovely retelling of a legend from the life of St. Francis of Assisi.

Perhaps you know the story. The town of Gubbio, in Tuscany, was being terrorized by an enormous wolf. It prowled around Gubbio, “clawing at the gates by day and howling below the wall by night.” The people of the town couldn’t go outside the city walls, for fear of the wolf. They and all their animals were suffering. Because they could neither sow nor reap, they were beginning to starve.

Brother Francis, a friar from the nearby town of Assisi, heard of their plight. He went to the town, to see how he could help. The people assure him that there was nothing he could do. If he tried, the wolf would surely destroy him.

But Brother Francis went out to the wolf anyway. When the wolf rushed at him, he stood still, held out his hand, and spoke to him softly, addressing him as Brother Wolf. The wolf became meek and obedient. He agreed never to kill the people or their animals again, if they would agree to feed him every day for the rest of his life.

The wolf and the people all kept their promises, and the wolf lived among them for another two years, before he died of old age. The people mourned Brother Wolf, who had become a friend to them.

Could the story of the Wolf of Gubbio be true?

The stories of the Little Flowers of St. Francis are not generally considered historically reliable. They were written long after St. Francis died. And while they may have been first told by people who knew him, they had been handed down and retold so many times over the course of a century that they surely changed. And it seems that the changes include introducing hagiographic elements. Historians generally consider these elements tropes, intended primarily to tell the reader what kind of person the saint was. They weren’t necessarily factual retellings of actual events.

And a holy person speaking to an animal, and the animal obeying the holy person, is a common enough hagiographic trope. It refers back to Adam in Paradise, living in peace with all the animals.

So the story of St. Francis and the Wolf of Gubbio is always called a legend.

While Langton’s version of the story ends with the death of the wolf, there is a tradition that the people of Gubbio buried the wolf, and later built a church dedicated to St. Francis where the wolf was buried.

And in 1872, when that church was being renovated, workers found the skeleton of a large wolf under a slab by the church wall. The wolf was reburied inside.

So perhaps this beloved story of a beloved saint happened just as it came down to us in the Little Flowers.

Ilse Plume’s first book, The Bremen-Town Musicians, was a Caldecott Honor book. How do you go on with your career when you start there?

She also teaches art and illustration at the School for the Museum of Fine Arts in Boston.

In Saint Francis and the Wolf, the text is on left-hand pages, and illustrations are on the right. The pictures include lovely details of flowers and birds and small animals. A tiny bouquet of the flowers from the illustration appears under the text, tying the spread together.

Each illustration is in a frame, balancing the text on the preceding page. The pages have wide margins, leaving plenty of white space. The space doesn’t feel empty, though. It feels peaceful and contemplative. Like St. Francis.

And a bonus: The end papers for this lovely book have the text of St. Francis’s Canticle of the Sun, surrounded by more flowers from the illustrations.

A dowry for the widower’s daughters: Of all the stories told about St. Nicholas, this is the one that is most likely to have happened just the way it’s come down to us.

St. Elizabeth the Dragon-Slayer: A story from the life of St. Elizabeth, an abbess who lived at the same time as St. George. When she was given land infested with a dragon, she killed the dragon.