Saint George and the Dragon: A Review 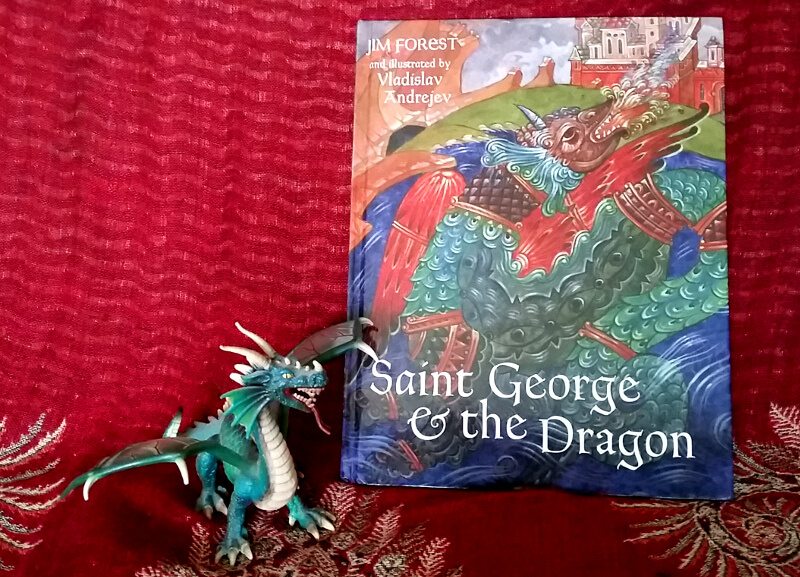 Children all know stories about fair maidens and fierce dragons and knights in shining armor. They know the dragon eats people, and the knight kills the dragon, marries the maiden, and lives happily ever after. And when they first encounter the story of Saint George and the Dragon, that might be the story they expect.

But that’s a later version of the story. In the oldest versions of the story, like the one that is told by Jim Forest in his remarkable picture book, St. George didn’t kill the dragon.

There was a town near a lake, and a dragon lived in the lake. People were terrified of it, because in the distant past, it was said, the dragon had terrorized the town. But the people worked out a deal. They’d give the dragon two sheep a month, and the dragon would leave them alone.

But then one day, the shepherd’s son didn’t leave the sheep fast enough, and the dragon ate the boy, too. And the dragon decided that two sheep weren’t enough. Every month, he wanted two sheep and a child.

And the people of the town gave the dragon their children. Month after month, year after year. Because they were afraid. Because the dragon might harm them, they offered up their own children for security. If you can call it security, being secure in the knowledge that, every week, another child would be given up to the dragon.

And one month, the king’s daughter was chosen by lot to take the two sheep to the dragon, and to be devoured with them. A knight, George, saw them on their way, and his love for Christ would not allow him to stand by and watch the dragon kill them. So he fought the dragon.

But he did not slay the dragon.

And that gives the story an entirely different meaning. It emphasizes different virtues. It changes everything.

Forest ends Saint George and the Dragon with a rich essay about “The Real Saint George.” He discusses what is known about the saint, and what is conjecture. He explains the imagery in traditional icons of the saint. And he clarifies the meaning of the story.

This book, like Forest’s Saint Nicholas and the Nine Gold Coins, is illustrated by Vladislav Andrejev in a style reminiscent of Russian icons. Although the illustrations are beautiful and well done, I didn’t like them in the St. Nicholas book. In Saint George and the Dragon, they are perfect.

I think the reason for that is that the highly stylized and somewhat abstract images create a separation between the reader and the art. It takes the story away from real people and places, and moves it to an otherworldly space. That works in Saint George and the Dragon, which is essentially a fantasy or a fairy tale. But the St. Nicholas story is different. The characters in that story should feel as real and solid and this-worldly as the people who live next door, and Andrejev’s art doesn’t allow that.

The type in Saint George and the Dragon is set in Goudy Thirty, the same gothic typeface that was used in Saint Nicholas and the Nine Gold Coins. It is an obnoxious typeface to use for a picture book.

But Saint George and the Dragon is so well told, and the illustrations are so well suited to it, that I can forgive even that.

Saint Nicholas and the Nine Gold Coins: Jim Forest retells the most well known and beloved stories about St. Nicholas.

St. Eizabeth the Dragon-Slayer: When the emperor gave the women’s monastery a piece of land that was infested with a dragon, the abbess took matters, and the dragon, into her own hands.