Saint Nicholas and the Mouse of Myra: A Review 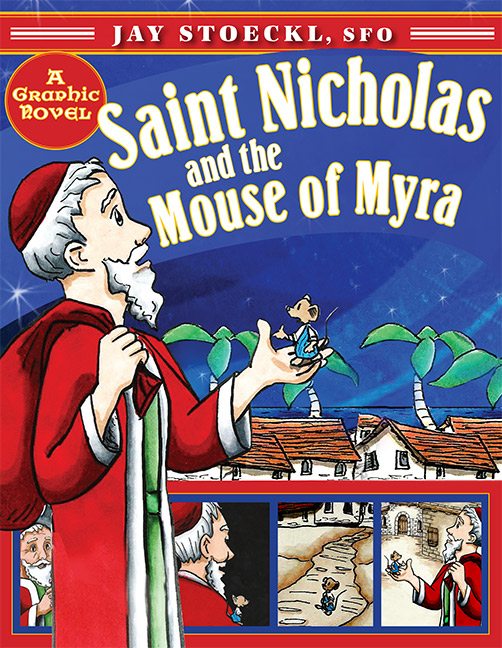 I picked up a copy of Saint Nicholas and the Mouse of Myra by Jay Stoeckl, OFS, because the idea of a graphic novel telling the story of St. Nicholas intrigued me. And I guess I’m still intrigued by the idea, but not so much by this particular book.

St. Nicholas’s sidekick, Cicero the Mouse, gives the story sort of a Disney feel that I don’t really like. I mean, I rather like the character. He’s smart and sassy, and he is quick to help Bishop Nicholas in whatever way he can. But, when the young Nicholas’s father is dying, and prays for God to give him a companion to help him in all his good works, a philosopher mouse seems to trivialize both the prayer and the good works. It just doesn’t work for me.

The book is Disneyfied in another way, too. There’s a lot of roughness and earthiness in the stories of St. Nicholas that have been handed down to us. But the stories, as Stoeckl tells them, have lost their rough edges. Nicholas disputes with Arius, but he doesn’t punch him. The poor girls will become slaves, because they can’t marry. But there’s no mention of prostitution. When Nicholas is in prison, there are references to torture and ill treatment, but it looks clean, and the prisoners look healthy and well fed. When Bishop Nicholas stops the execution, he doesn’t wrestle the sword away from the executioner.

I think, perhaps, this being advertised as a graphic novel, I was expecting the content to be targeted towards an older audience. I didn’t expect the stories to be tidied up for young children.

I also didn’t expect the book to be preachy and didactic. But it is, at least for my taste. Besides serving as Nicholas’s helper, Cicero’s ignorance of Christianity allows Stoeckl to insert explicit lessons into the story. Lessons complete with footnotes.

And footnoting Scripture references — no. Just don’t. Not in a children’s book. It is intrusive, and it gives the page the unwholesome appearance of a Chick tract. But young children aren’t likely ever to have seen a Chick tract, so that might not bother them as much as it bothers me.

The most delightful thing about Saint Nicholas and the Mouse of Myra is that it includes episodes from St. Nicholas’s life that many readers will be unfamiliar with.

Of course it contains the familiar stories of the man with three unwed daughters, the dispute with Arius. But it also includes stories that are less familiar – saving a ship from a storm at sea, saving Myra from famine by multiplying grain, healing a dying child.

And it contains one story that I’ve never seen associated with Nicholas anywhere before – Nicholas hanging up his cloak on a sunbeam. I’ve seen a similar story associated with St. Brigid of Ireland, and perhaps the author misremembered it as a St. Nicholas story. That’s one of the ways that stories change over time – even stories about saints.

Would I Buy It?

I don’t think Saint Nicholas and the Mouse of Myra is destined to become a Christmas classic.

But I do think that there are children who would find it delightful. A child who is just learning to read independently will likely appreciate the comic-book layout, with speech bubbles and clear illustrations. And a child who loves St. Nicholas may well find the unfamiliar episodes in the saint’s life exciting. The flaws that bothered me in the book are unlikely, I think, to bother a seven-year-old.

I wouldn’t advise you to get this book for your own collection. But for the right child, it would make a lovely gift.

And I’ll keep my eye out for a graphic novel about St. Nicholas that’s intended for a more mature audience. Saint Nicholas and the Mouse of Myra isn’t that book. But that is a book I would really like to read.

Vasily and the Dragon: A Review: St. Nicholas plays a major role in this retelling of a Russian folk tale.

Looking for the real St. Nicholas: When it’s December, and you see a man dressed in red, with a white beard, how do you know whether it’s Santa Claus or St. Nicholas?

Book activities with The Saint Nicholas Day Snow: Extend the book with these joyful activities, from cookies and crafts to academics and Advent devotions.