Saint Nicholas and the Nine Gold Coins: A Review 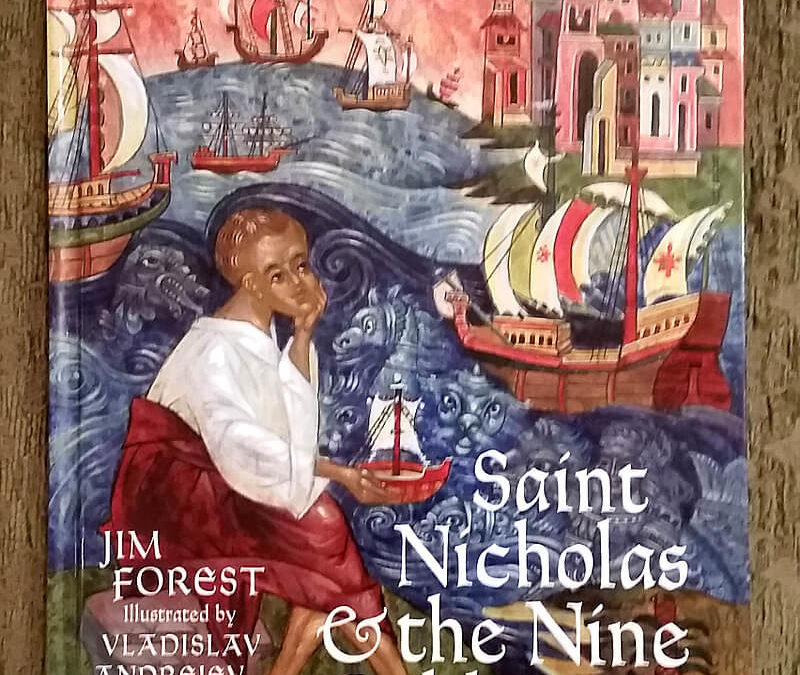 Of all the stories that we tell about St. Nicholas, the most familiar is probably the one that Jim Forest retells in Saint Nicholas and the Nine Gold Coins.

The Story of the Poor Man and His Three Daughters

It’s the story about a poor man who had three daughters. In most versions of the story, the man is a widower. The daughters couldn’t marry because there was no money for a dowry. In some versions, the eldest daughter has resolved to sell herself to a brothel so that her sisters could marry.

St. Nicholas, at that time still a boy, heard of the family’s distress. He slipped to the poor family’s house in the dark of night and tossed a bag of money in through the window, where by chance it landed in a shoe (or perhaps a stocking hung to dry). The eldest daughter was married. St. Nicholas did the same thing a second time, and a third, so that all three girls could have honorable marriages. The third time, though, the girls’ father caught Nicholas. Nicholas made him promise not to tell that he had given the gifts, but of course the man told.

When children hang stockings by the chimney or put shoes by the door for St. Nicholas to fill with treats, their actions commemorate this story of St. Nicholas.

And, interestingly, this story, of all the stories that we tell about St. Nicholas, is the one that historians think is most likely to be true.

It’s also likely, of course, that some of the other stories we tell are true. St. Nicholas may well have attended the First Ecumenical Council. He might have hit Arius upside the head. He could have saved three innocent men from being executed by wrestling the sword away from the executioner.

But historians, at least the ones I’ve read, think that the story about the poor man and his daughters, or something very like it, must have happened.

I also wish he hadn’t chosen to call St. Nicholas “Nick” throughout the book. Perhaps in the third century, “Nick” was a common nickname for boys named Nicholas, but it feels like a bit of an anachronism to me. I find it distracting.

On the other hand, I love the fact that Forest’s version of the story includes St. Nicholas’s uncle, Bishop Nicholas of Patara, who raised Nicholas. That’s unusual, and the relationship between the two Nicholases makes St. Nicholas a richer, fuller character.

It’s also unusual that the poor man in Forest’s telling isn’t a widower, and some parents may appreciate the fact that he says nothing about brothels or slavery. He just says the girls can’t marry.

And I appreciate Forest’s notes at the back of the book, which provide more information about St. Nicholas.

Visually, Saint Nicholas and the Nine Gold Coins is striking. Illustrator Vladislav Andrejev is a master iconographer, and the people and buildings in the illustrations are in the style of icons.

The lettering, on the other hand, is a fault in the book. I don’t know whether Andrejev decided to use Goudy Thirty as the typeface for a picture book, or whether someone else made that decision. Whoever it was, it was a lousy decision. It’s not that I don’t like Goudy Thirty – I do! I’m guessing that someone must have liked the way the Gothic look evokes hand-lettered illuminated manuscripts.

But the Gothic look isn’t easy to read, especially when you’re reading out loud. You might want to read the book through a couple of times before you read it out loud the first time.

Should You Get Saint Nicholas and the Nine Gold Coins?

Yes. Yes, you should. Especially if the iconographic style of the illustrations appeals to you.

It’s not a perfect book. It’s not as good as Silent as a Stone, Jim Forest’s wonderful book about Mother Maria of Paris. But there aren’t many books that measure up to that one, and Saint Nicholas and the Nine Gold Coins is a very good book. It is worth having as part of your collection or giving to a child that you love.