Saints Athanasia and Andronicus, models of marriage and monasticism 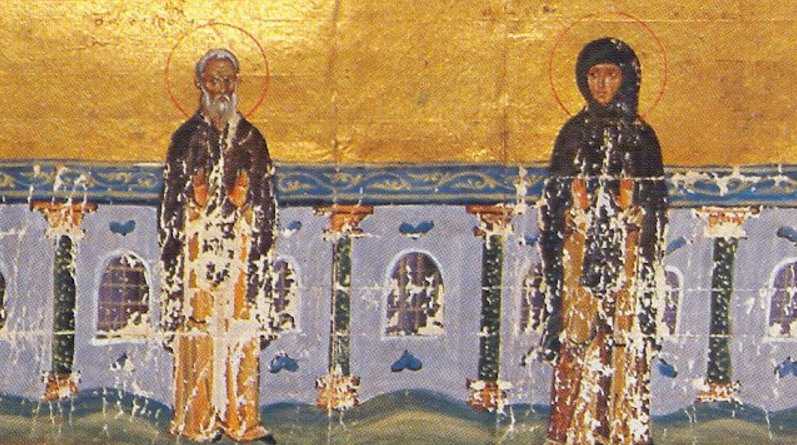 Athanasia and her husband Andronicus lived in Antioch towards the end of the fifth century. The city had been founded not a hundred years earlier. It was a city that attracted people from the far corners of the world, where silk and spices were traded and ideas and where people exchanged ideas along with goods. It was called the Cradle of Christianity, and it was in Antioch that the word Christian came into use.

Andronicus and Athanasia bore the marks of the city they lived in. Andronicus was by some accounts a goldsmith, and by others a moneychanger. What all accounts agree on is that Andronicus was wealthy, even by the standards of Antioch.

He was also pious, even by the standards of Antioch. He and Athanasia decided that they would give a third of their money to the poor, and a third to the church, and keep only a third for themselves.

They had two children, John and Mary. After the younger child was born, they began to feel that it wasn’t enough for them to give money to the poor. They decided to live henceforth as brother and sister. Four days a week, they served the poor with their own hands. Athanasia would wash and take care of the needs of poor women, and Andronicus would do the same for poor men. In this way, they gave the larger share of their time to the poor, and kept only the smaller share for themselves.

They lived this way for ten years. And one day, when Athanasia got home from her work, she found the children sick with high fevers. Andronicus came home, saw what was happening, and went to the shrine of St. Julian to pray for them. But before he got home, both children died.

Athanasia was inconsolable. She wouldn’t leave the children’s graves. Her husband could do nothing to help her, nor any of their friends.

One night, at the grave, Athanasia received a vision from St. Julian, who comforted her. St. Julian assured her that the Righteous Judge, who had deprived the children of the good things of earth, would not deprive them of the good things of heaven. The saint then clothed her in a monastic habit, telling her to weep for her own sins, and not for her children.

And so Andronicus and Athanasia gave all of their wealth to Athanasia’s father. They asked him to build a hospital and a monastic guest house. And then they took a small amount of blessed bread and headed for Alexandria.

They stopped at the shrine of St. Menas to pray, then they parted ways. Andronicus joined a men’s monastery, and Athanasia joined a women’s monastery some distance away.

After a dozen years, Athanasia decided she wanted to go visit the holy places in Jerusalem and pray there. Because it was dangerous for a woman to travel alone, she dressed as a man for the journey, and went by the name Athanasius. Along the way, she met another pilgrim, Andronicus, her husband. She recognized him. But because she said she was a man, and because her appearance had changed through time and ascetic labors, he didn’t recognize her.

And so they traveled together as fellow monks. They kept a companionable silence as they journeyed. And when they completed their pilgrimage together, they returned to the monastery where Andronicus had lived. With the blessing of the abbot, they settled in a single cell together. They lived in silence and asceticism, and they grew in virtue.

When Athanasia knew that her death was near, she wrote a letter and gave it to the abbot, telling him to read it after her repose. She then received communion, and shortly thereafter she died.

It wasn’t until her body was prepared for burial that her brother monks realized that she was a woman. And it was not until the abbot read the letter she had left for him that they knew she was Andronicus’s wife.

Andronicus himself died ten days later. As they had lived together as husband and wife, then as monastics, they were glorified together as saints. Their feast day is October 9.

Let us, the faithful, crown with laurels of befitting hymns the wise Andronicus,
who lived in blameless righteousness,
with the godly Athanasia, his spouse in Christ God;
who have shown the type of lawful wedlock to the world
and became divine examples of monastic life.
Let us cry to them: Rejoice, O yokemates in holiness.

St. Susanna, deaconess and martyr: When her parents died, she didn’t marry. Instead, she gave away all that she owned, took the name John, and became a monk.

The Lord’s wise handmaiden, Melania the Younger: When their children died, Melania and her husband chose to live as brother and sister. They couldn’t actually become monastics until they gave away Melania’s fortune. And that proved harder to do than they had ever imagined.

St. Placilla the Empress: St. Placilla was a woman of wealth and power. That allowed her to serve the poor with her own hands, in spite of the objections of her guards and court.