Sasha and the Dragon: A Fairy Tale with Angels 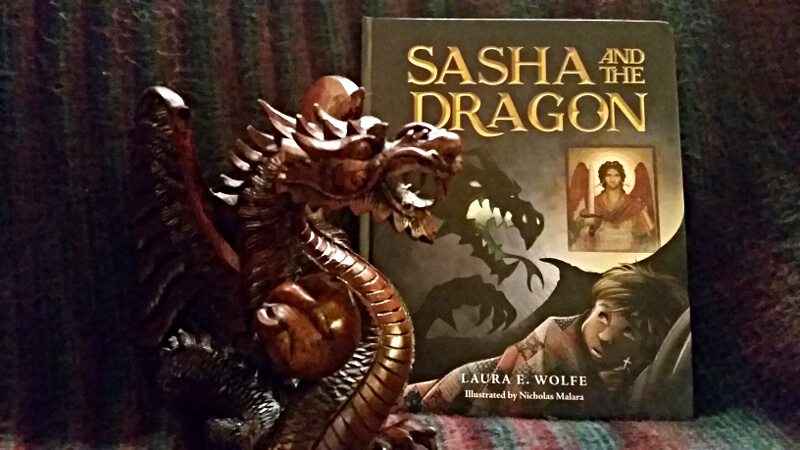 If Sasha and the Dragon had existed 30 years ago, I might never have written Catherine’s Pascha. Seriously.

When I was in college, I took a class in creative writing. One assignment was to write a villanelle. The professor explained the structure of the poem, and gave us an example. “Do Not Go Gentle into That Good Night” by Dylan Thomas.

And the class rebelled. No way, no how could we write anything like that. We had some decent poets in the class, but that poem was so far beyond anything that any of us could do that even the attempt seemed absurd. Pure hubris. The professor had to find some lesser examples before we were willing to try.

And that’s how I felt when I read Sasha and the Dragon. It’s right up there with Last Stop on Market Street and After the Fall and Chicken Sunday.

And it is, wonderfully, amazingly, an Orthodox Christian picture book. When my kids were little, there weren’t many picture books from an Orthodox Christian point of view. What few I could find were either saint stories or Bible stories or how-to-behave-in-church stories. And some of them were perfectly lovely. But what about gorgeous, exciting, wonderful stories that reach into a child’s heart and show them everything that is there?

Where were those stories? Those didn’t seem to exist, when my kids were small. Not if you wanted stories about Orthodox Christian kids. Which is why I started writing picture books. And I might not have done so, had I thought I had to live up to Sasha and the Dragon.

Dragons in a New Land

Sasha and the Dragon is the story of a little boy who has immigrated with his family to America from Russia. More than, it’s a fairy tale.

Sasha sees shadows of the dragon everywhere. He’s just a little boy, an immigrant from Russia. He’s living in an American city with his mother and his elderly, ailing grandmother. And he’s afraid.

And then, one night, a dragon appears under his bed. As it crawls out, the terrified child turns to the icon of St. Michael hanging on his bedroom wall, and prays:

If you’re a fan of the comic strip Rose is Rose, you might be able to guess what happens next. (Rose is Rose, for those who don’t know it, is the sweetest comic strip there is. It includes a little boy named Pasquale and, sometimes, his guardian angel.)

If your children are very young, or very sensitive, you might be concerned that they’ll be afraid of the dragon. They might be. In fact, they probably should be. It’s a frightful beast. But this is a fairy tale. And G.K. Chesterton told us about bogeys and dragons in fairy tales:

Or a Tom Bombadil, or an Elbereth. Or, in this story, a St. Michael.

I think this book would make a wonderful companion piece to After the Fall for children who struggle with fear or worry. After the Fall shows them that they can overcome some scary things on their own, by hard work, determination, and courage.

And Sasha and the Dragon shows them that there are other kinds of scary things, things that are impossible to face alone. And Sasha learns that he can turn to the holy angels for help. He doesn’t have to face the dragon alone.

Beauty in a Book

Start with the language. I’m seriously in love with author Laura E. Wolfe’s use of language. Some folks might complain about an excess of adjectives, but not me.

Listen to the battle between the Archangel Michael and the dragon:
“The magnificent guardian swung his great sword, and the blade carving the air sounded like glory. The dragon shattered into a million mirror shards, and the angel’s gilded wings beat a blast of victory. A warm wind rushed around the room, tasting like summer and ringing like church bells.”

And if the language weren’t enough to make you fall in love with this book, there’s still the art by Nicholas Malara. Malara is the illustrator of the board book, Goodnight, Jesus.

When my husband was looking over my shoulder at Sasha and the Dragon, he said, “That’s dark, for a picture book.” And the art, for most of the book, really is dark. Everything is gray and shadowy. There’s nothing light, nothing bright, nothing colorful.

That changes, of course, after the dragon is destroyed. The shadows disappear, and the world, like Sasha’s heart, is full of light and joy.

The best literary works never stand alone. They are connected to other stories, they evoke ideas that you’ve seen in other stories. And these connections make the story richer and deeper, they reveal the truths in the story more vividly. When a book makes me think of J.R.R. Tolkein and G.K. Chesterton, of Dan Santat and Dylan Thomas, of Goodnight Jesus and Rose is Rose, of stories from the saints, of the whole world of fairy tales, it is quite simply an amazing book.

Saint George and the Dragon: A Review: A gorgeous retelling of this traditional tale, with icon-like illustrations and rich notes in the back of the book.

Vasily and the Dragon: A Review: In this folk tale from Russia, a rich and miserly man contends with St. Nicholas, and Vasily the Unlucky contends with a dragon.