The Second Death of Lazarus 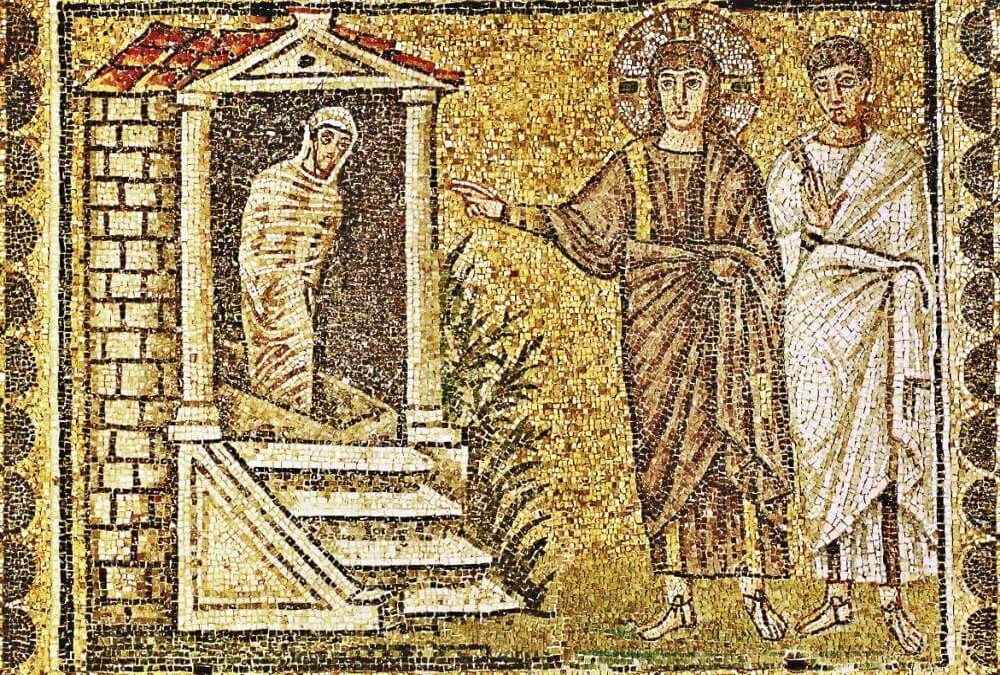 “The Second Death of Lazarus” is a poem by Nicholas Samaras. His Eminence Savvas Zembilas of Pittsburgh introduced me to the poem (and the poet) a year ago, and it’s become one of my very favorite poems. But that’s, perhaps, because Lazarus Saturday is one of my very favorite days of the Church year. It’s a day of now and not yet, of what is and what shall be. No longer Lent, not yet Holy Week, a promise of Pascha, but not Pascha. A day of longing and wonder.

It’s still a day of fasting. But today, we can have fish eggs. Caviar. Because, in their own way, they foreshadow the eggs we’ll eat on Pascha, as Lazarus foreshadows the Resurrection of Christ.

The Second Death of Lazarus

(Folklore relates he was afterward rarely known to smile.)

Since then, I can only see the world as through blue, transparent water.
I recall more after the event, when I felt like a thatched guest in my own
thatched home. Everything there felt like a tomb. I’d exhume the creased loam
from under my gray nails, peer beyond the crowds, the faces, the imperators.

The husks of my winding sheets lay piled in the dusty corner of the bedroom.
I sat quiet at the table like a gold-framed object of art, tolerating the stares
of the curious, while my sisters on each side kept stroking, stroking my hair.
My winding sheets, the hollow of a man bereft of the dead groom.

When I reached before myself and plucked dark, glistening grapes—
and ate slowly—some felt it was a statement. For me, it was enough
to keep arranging my hands. Some men looked down, rough
with rejection; others wanted details of the passage. I could draw no maps.

My Lord spoke, and his voice, too, was faraway. I just kept hearing
a distant music, strains I couldn’t place or grasp—the gauzy melody
yet calling, but which I still can’t define or forget. I accepted being newly
alive but you have no idea what you give up for life, the dream unclearing.

My body still feels like the absence of a line drawn through white flour.
I was the earth, the chaff of wheat scythed, beaten back to shape, breath,
movement. Eventually, everyone I knew left me to ponder my second death
by default. What mystery is left to where I’ve been before in its gray hour?

Years later, some still recognize my eyes. Yes, I’m the dead one who came
to fear life more, who somehow missed that brief blaze of paradise,
until the sizzling shock of a voice beckoned me to open my eyes,
move back to the cavern, off the slate bed, to hobble out stiff and lame

into starkness. Then, what do you do when your savior brings you back,
only to leave himself? What can you do but go on? People say I seem
always distracted, not fully listening, not listening, as if I’m dream-
like, half-waking to something else, not totally there or here. I wore black

clothing, the new century’s vestments. I moved to green Cyprus, too sick
of Bethany, and established a half-life there. I served as an old bishop
for Kition, the city of aqueducts. Its water’s melodic song gave me hope.
I kept an ear to the narthex, listening for a voice again, a strain of music,

pining to meet the widow of Nain’s son, or Jairus’ daughter—asleep
or dead—at least, to compare notes. I wasn’t the only one resurrected.
Apostle Peter raised Tabitha from the dead. But I left alone and protected
the Cypriot reposed. Why deprive them of what I had known? Let them keep

what I glimpsed. There’s more of the truth there than in the gossamer lies
of this scant life. The second time is manna. I want the last and crowning amen.
To hear the next, transient calling, to be a final old man, waiting to die again
smiling and simply this time, keeping an eye on the frail-blue, revoked skies.

Stephen to Lazarus: A Poem by C.S. Lewis: A brief poem from the collection that made me fall in love with the writings of C.S. Lewis.

Like Jonah on the Third Day: St. Jonah is officially commemorated in September, but I always think of Holy Saturday as his feastday.

Calculating the date of Pascha: Have you ever wondered why Pascha is celebrated when it is? And why the date doesn’t match up with Easter? It’s complicated.