Silent as a Stone: A Review 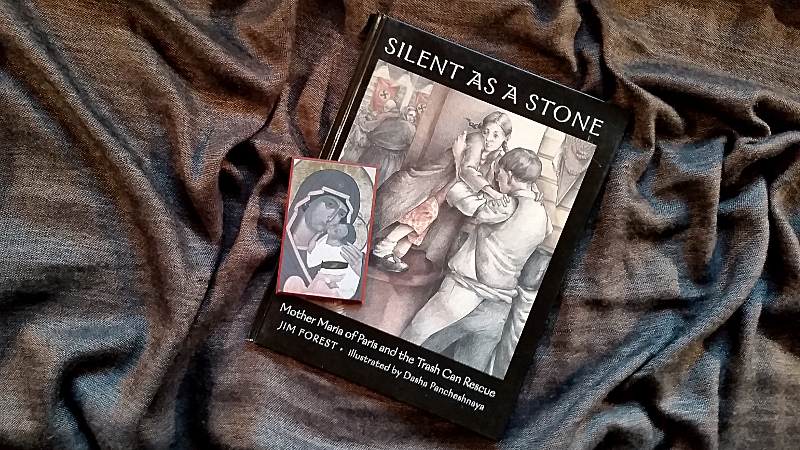 A deadly game of hide-and-seek is at the heart of Jim Forest’s magnificent picture book, Silent as a Stone: Mother Maria of Paris and the Trash Can Rescue.

The story begins with a nun in a tattered habit standing before her icons and weeping in prayer. It is July 1942. Paris has been under Nazi control for two years. Things have gone from bad to worse. And this nun, Mother Maria of Paris, is asking God to show her what to do.

Her prayer is interrupted – or perhaps it would be better to say her prayer is answered – by a knock at her door. The priest, Father Dmitri, tells her that a neighbor boy, a Jewish boy, has come for help.

The boy tells them that his family was taken away, and he just barely escaped. Then there is another knock at the door, and another. Before long, Mother Maria’s kitchen is full of people telling the same story. Thousands of Jews are being arrested and taken away. But where?

At the Vel d’Hiv

Mother Maria’s son, Yuri, soon arrives with the answer. The Nazis are taking the Jews to the Vel d’Hiv, the velodrome. What the Nazis will do there, none could say.

But Maria knows what she will do. Taking Yuri with her, she goes to the velodrome herself and insists that the guards let her in to provide spiritual counsel and support to those held inside. The guards know her. They let her in.

And as she walks among the people, talking, comforting, sharing bits of bread, she notices something. The Nazis have janitorial staff working to keep the place clean. And Mother Maria knows the men who are filling the trash cans.

A few whispered words. Could they take children out with the trash?

It will be dangerous. But they will do it.

And thus the game begins. Every trash can leaving the velodrome carries trash, garbage, and a single Jewish child. Every child knows that, to survive this game, they must be as silent as a stone.

When the children are delivered to Mother Maria, she spirits them out of Paris to safety.

The story ends as it began, with Mother Maria standing at prayer.

Dacha Pancheshnaya illustrated Silent as a Stone with gentle, subdued drawings worked in colored pencil. She based her drawings of Mother Maria, Father Dmitri, and Yuri on photographs taken during their lifetime. The drawings provide exactly the right visual tone for the story, neither too bright nor too dark.

The book includes a lengthy historical note at the back. The note provides the parent or teacher reading the book more information about our mother among the saints, Maria of Paris.

You can read more about her at the website of the Orthodox Peace Fellowship. Because Mother Maria is recognized as one of the Righteous Among the Nations, you can also read about her on the Yad Vashem website.

You became an instrument of divine love, O holy martyr Maria,
And taught us to love Christ with all our being.
You conquered evil by not submitting yourself into the hands of the destroyer of souls.
You drank from the cup of suffering.
The Creator accepted your death above any other sacrifice
And crowned you with the laurels of victory with His mighty hand.
Pray fervently that nothing may hinder us from fulfilling God’s will
Because you are a bright star shining in darkness! 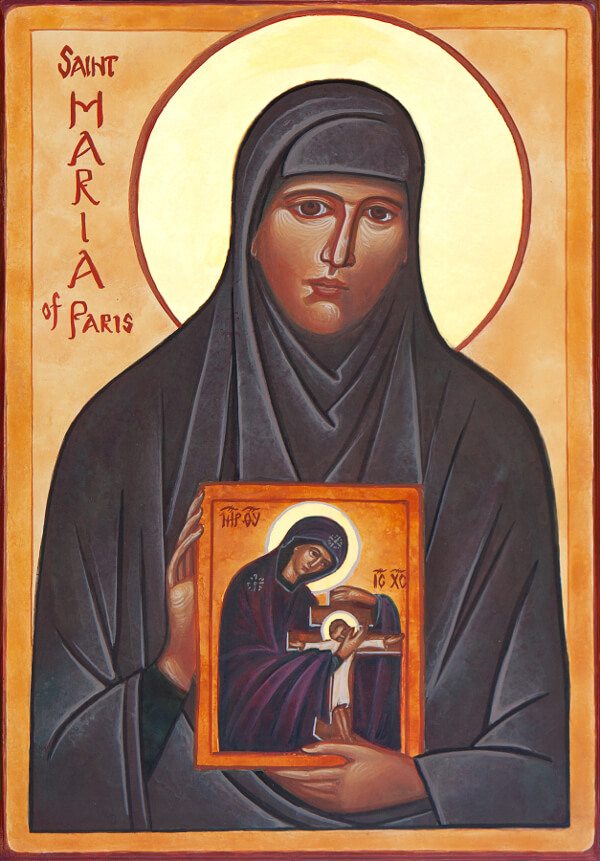 Orthodox Saints of World War II: As Orthodox Christians, we look to the saints to guide us and to show us by their examples the Christian response to the events in our lives and in our world.

Passage to Freedom: A Review: The story of Chiune Sugihara, a Japanese diplomat and Orthodox Christian who defied orders from his own country to save the Jews who came to him for help.