The Emerald of God, St. Euphrosyne of Alexandria 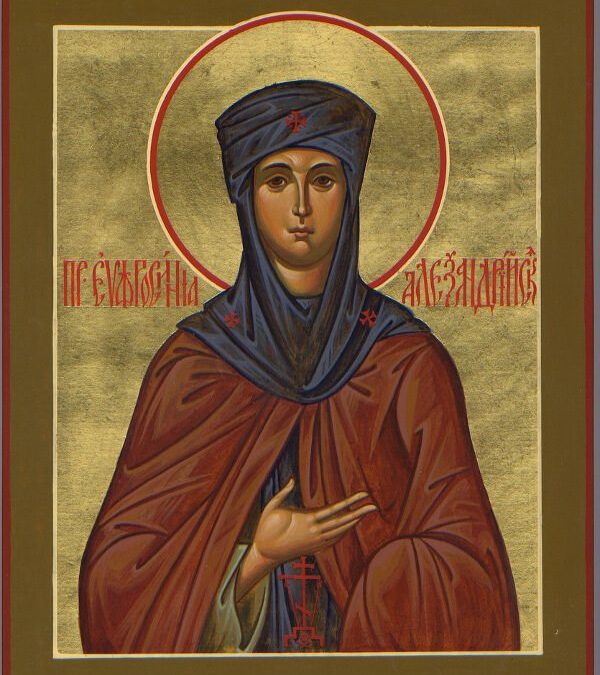 When St. Euphrosyne was a child, St. Cyril was the patriarch of Alexandria, the city where she lived. She was the only child of a wealthy and important family. But her mother died when she was still young, and she was raised by her father, a man who was pious in spite of his great wealth.

The Christological controversies filled the air and the conversations of Alexandria during Euphrosyne’s childhood. Patriarch Cyril disputed with the Nestorians. Councils were held in Ephesus. And Euphrosyne’s father spent as much of his time as he could manage at a monastery, talking with the abbot. He brought his daughter with him. She learned much of theology, and much of church politics, from those visits.

When she turned 18, her father chose a husband and planned a wedding for her. They went to the monastery for a blessing, which they received from the abbot. But Euphrosyne didn’t want to marry the young man her father had chosen for her. She would rather lead a life of solitude and prayer.

Somehow, she encountered a wandering monk. The conversation between them must have been fascinating. By the end of it, he agreed to tonsure her, without ever speaking to her father. And without speaking to her father, she left their home to find a monastery. She thought that her father would find her in a women’s monastery. She feared that he would bring her home and force her to marry against her will. But where could she go?

She decided to give up being the woman Euphrosyne. She gave her jewelry and other belongings to the poor. Then, dressing as a man, she became the eunuch Smaragdos, which means Emerald. I can’t help thinking that she took the name as a reminder of all that she had given away.

Smaragdos went to the men’s monastery where Euphrosyne had spent so much time with her father. The monks didn’t realize who he was (or if they did, they didn’t let on), and they took the eunuch in.

Smaragdos spent 38 years there, in a solitary cell. Perhaps, when he decided to go that particular monastery, which he had spent so much time at and loved so dearly, it didn’t occur to him that his father would continue coming to the monastery as he always had. He went there, perhaps, even more often than he had in the past, to seek guidance and comfort after Euphrosyne disappeared.

As Smaragdos’s reputation for wisdom and piety grew, the other monks strove to be like him. And after some time, the abbot began sending Euphrosyne’s father to the eunuch Smaragdos, for consolation and spiritual guidance.

When Smaragdos knew that his death was near, he finally told his father that he was Euphrosyne. Euphrosyne asked her father to be the one to prepare her body for burial. When she died, he did as she asked. Then he gave away all his wealth and came to the monastery as a monk. He lived in the cell that had belonged to the eunuch Smaragdos, laboring for ten years until his own death.

Desiring to reach the life on high, you earnestly spurned every vain and fleeting pleasure here below and lived among men as if a man, O all-famed Euphrosyne, since for the sake of Christ your Bridegroom you forsook a bridegroom that was temporal.