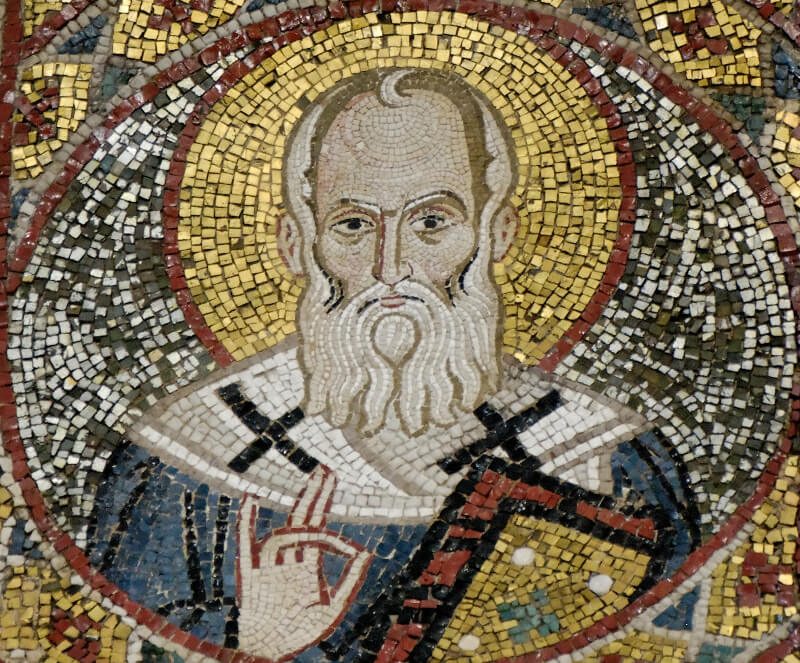 Today, we celebrate St. Gregory of Nazianzus. And I’ll have to admit that I sometimes struggle to understand exactly which Gregory this St. Gregory is. There are so many Gregories! Today, I want to go through the Gregories, at least some of them, and clear up my own confusion. Follow along, if you like.

Who He Was, and Who He Wasn’t

And St. Gregory Nazianzen was one of the Three Holy Hierarchs, along with his friend St. Basil and St. John Chrysostom.

And this Gregory is one of the three saints who are called Theologians. The other two are, of course, St. John the Theologian (although we usually call him St. John the Evangelist) and St. Symeon the New Theologian.

But this Gregory is NOT the Gregory who is one of the Three Pillars of Orthodoxy. That’s St. Gregory Palamas. The other two Pillars are not Gregories; they are St. Photios and St. Mark of Ephesus.

And he was the Bishop of Nazianzus (as we’ll see below), but not the first Bishop Gregory of Nazianzus. That was his dad.

But back to St. Gregory the Theologian: This Gregory could write! Seriously, he was an amazing writer. He wrote theology of course. Here’s a sample:

God always was,
and always is,
and always will be.
Or rather, God always Is.
For Was and Will be
are fragments of our time,
and of changeable nature,
but He is Eternal Being.
And this is the Name
that He gives to Himself
when giving the Oracle to Moses in the Mount.
For in Himself He sums up
and contains all Being,
having neither beginning in the past
nor end in the future;
like some great Sea of Being,
limitless and unbounded,
transcending all conception
of time and nature,
only guessed at by the mind,
and that very dimly and scantily.

As seems fitting, for someone so wrapped up in threes, he wrote extensively about the Holy Trinity, the unity of the Godhead, and the Holy Spirit. He explained theosis. He told how to overcome evil rulers.

And he wrote poetry! He wrote memorial poems honoring his friend St. Basil the Great. He wrote autobiographical poems. And he wrote religious poetry.

Whining and Running Away

It’s from his letters that we learn that, besides being a scholar and a writer, St. Gregory Nazianzus was something of a whiner.

During a storm at sea, he promised that, if Christ would save him from the storm, he’d dedicate his life to Christ’s service. Christ did his part.

Once he was saved, though, St. Gregory decided to go on his own way, continue his studies, and think about how he wanted to fulfill his vow.

After a time, his father, the first Bishop Gregory of Nazianzus made him a priest. But our St. Gregory didn’t want to be a priest, so he called his father a tyrant and ran away.

His friend, Bishop Basil of Caesarea, made him a bishop. He complained that Basil and his father had forced the episcopacy on him. He complained about Sasima, the town he was made bishop of, calling it “a paltry horse stop on the main road.” He complained that it was “devoid of water, vegetation, and the company of gentlemen.” And he resented both his father and his friend. He told Basil that he wanted to pursue a contemplative life. How could he do that in this boring nothing of a town?

So St. Gregory ran away again. He left his see to go back to Nazianzus and help his father, who was dying. That didn’t make his friend and fellow bishop Basil happy.

From Nazianzus to Constantinople

And after his parents died, Gregory abandoned Nazianzus for a monastery, fulfilling his vow as he chose. He stayed there for three years, until Basil died. And then Gregory was called to Constantinople to preach and teach, which he did admirably. Before too long, he found himself enthroned as Bishop of Constantinople.

But not everyone loved Bishop Gregory. And during the Second Ecumenical Council, some of his opponents claimed that he could not be the Bishop of Constantinople, because he hadn’t been properly transferred from his see at Sasima. (Paperwork and bureaucracy were not unknown in Byzantium.)

And Bishop Gregory resigned. He left Constantinople and went back home. Not to Sasima, but to Nazianzus, where he served as bishop until his health forced him to retire.

After his parents died, he had given away most of his inheritance, but had retained a small portion of the family estate. He settled in there. As his health permitted, he wrote theological discourses and poetry. He received visitors from time to time, people who came because of his great sanctity and his great learning.

And St. Gregory the Theologian stayed there for the rest of his life, never leaving, and as far as I can tell, never complaining.

Troparion to St. Gregory the Theologian

The sweet-sounding shepherd’s pipe of your theology
overpowered the trumpeting of the orators;
for having searched the depths of the Spirit
eloquence was also bestowed upon you.
Pray to Christ God, Father Gregory,
that our souls may be saved.

St. Gorgonia the Audacious: St. Gregory’s sister, Gorgonia, always did exactly what was expected of a pious Christian woman. Except when she didn’t.

Like Jonah on the Third Day: Jonah is officially commemorated in September. But I always think of Holy Saturday as his feast day.

St. John the Theologian and the Mother of God: When St. John’s feast day fell on Mother’s Day, I found myself wanting to know more about his relationship with Jesus’s Mother.