St. Irene and the Apples of Paradise 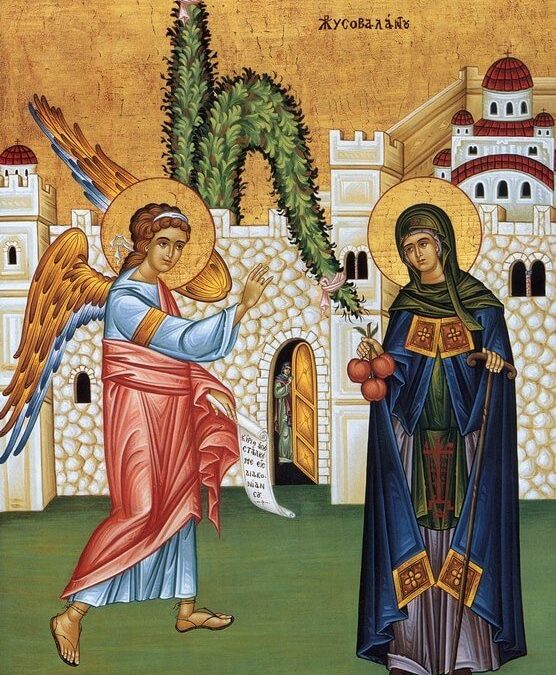 You know how, in certain fairy tales, the king sends out his emissaries to find the fairest woman in the land? They’re hoping to find someone for the prince to marry. Oddly enough, that’s something that parents of princes once did in the real world, not just in fairy tales.

But even though the world of long ago and far away was real, it can seem a lot like a fairy tale. And that’s how this story begins.

In the ninth century, in Constantinople, Michael, the young son of Empress Theodora, was in need of a wife. (This is St. Theodora the restorer of icons, not St. Theodora the wife of Justinian.) Theodora sent her servants throughout her empire to find a maiden who was beautiful enough, virtuous enough, and noble enough to marry her son. Her servants found Irene.

Irene was incomparably beautiful. She was virtuous. She came from a noble family. What more could an emperor want? Theodora’s servants and Irene’s family quickly negotiated the terms of the marriage. Irene accepted the offer, and soon everyone was on the road to Constantinople for a wedding.

On the way, at Irene’s request, they stopped at Mt. Olympus so that Irene could ask the blessing of the famous holy man, Joannicius, who lived there. Joannicius blessed her and told her to hurry on to Constantinople (which she was planning to do) because the monastery of Chrysovalantou needed her.

That might not have made sense to Irene at that moment, but she did as she was told. And when they arrived in Constantinople, she learned that the Emperor Michael had already married someone else.

That’s not exactly a fairy tale ending to the story. There was no wedding. But that doesn’t mean there was no happily ever after.

St. Irene and the Cypress Trees

As it happened, there were plenty of men in Constantinople who would have been happy to marry the Emperor’s cast-off. Irene got many offers of marriage. She turned them all down and went straight to the monastery of Chrysovalantou. There she became a nun, and later the abbess.

As the abbess, it was her custom on the night before Great Feasts to stand in the monastery courtyard and pray the entire night. One night, one of the nuns was unable to sleep, so she was up walking about the monastery. She saw her abbess praying in the courtyard. That, she expected.

When Irene was done with her prayers, she blessed the trees, and they returned to standing. The nun who had seen all this couldn’t believe her eyes. She thought that, perhaps, she was deluded. She went away secretly.

That is, perhaps the most famous story about St. Irene Chrysovalantou. It can’t help but be famous. It’s a bit like another story, the story of the palm trees bowing to the Theotokos in Egypt.

St. Irene and the Apples of Paradise

But it’s not the only story about St. Irene. She was a wonderworker, and worked many miracles both during her life and after her death. But my favorite story of her is not a miracle she worked, but a gift she received.

The story starts with a sailor coming to the monastery to see the abbess. Irene didn’t always receive visitors who came to see her, but she received this sailor.

And from the sailor, she received a story and a gift. The story was this: As he was leaving Patmos, he saw an old man on the shore waving at them to stop. There was a strong wind, but the ship stopped, seemingly of its own accord. The old man walked across the water to the ship. He was carrying six apples. He gave them to the sailor, telling them that three were for the Patriarch, and three were for the Abbess of Chrysovalantou. The apples were gifts from St. John, the beloved disciple, in Paradise.

Irene wasn’t sure what to do with the apples, so she fasted for a week, asking God to help her figure it out. For the next 40 days, she ate a small bit of one of the apples each day. During that time, she didn’t eat or drink anything else, either by day or by night. The bites that she took from the apple of Paradise were enough to sustain her.

On Holy Wednesday, she concluded her 40-day fast. On Holy Thursday, she shared one of the apples among all of the nuns of the monastery.

The third apple, she ate many years later, as she was dying. She was 102 years old. The final apple of Paradise strengthened her for her final journey.

Blessing Apples on the Feast of St. Irene

St. Irene Chrysovalantou’s feastday falls on July 28 each year. It became the custom, in parts of Greece, to bring apples to church to be blessed on her feastday. People took the blessed apples home, and ate them. The apples were said to bring healing to soul and body. In particular, childless women believed that eating an apple blessed on St. Irene’s feastday, and asking the saint’s prayers, would allow them to conceive. These mothers would often name their child Chrysovalanti or Chrysovalantou as a way to give thanks for the blessing.

That custom survives in many places to this very day, in Greece and around the world.

The Prayer for the Blessing of Apples

This prayer for the blessing of apples on the feastday of St. Irene was written by the Nun Isidora Agierotheitissa.

O Creator of everything and of all creation, O all-wise Creator and Governor and Foreseer, the Provider of every earthly and heavenly good, and the Distributer of gifts, O only immortal King, You Who feeds our bodies with the fruits of the earth, and strengthens our souls by Your mystical and invisible presence, You Who grants to Your sons and friends the good things of Your eternal Kingdom, and Who reveals the inscrutable Mysteries of Your will to Your Saints from all ages, and the richness of Your Love supplies all through the inheritance of eternal gifts, You Who the Venerable Irene pleased in the Monastery of Chrysovalantou through perfect asceticism, granting her the knowledge of heavenly Mysteries and the promise of Your Kingdom to come, Who granted her three apples from Paradise, through Your bosom-friend and theologian John, as a foretaste of joy that surpasses this world, which filled her with unspeakable fragrance and rejoicing, as a witness to the Divine Trinity Which had dwelt in her, Who taught her Your perfect desires and showed her life to be a fragrance of praise and a holy offering, do You therefore now, O Merciful Lord Who loves mankind, the spring of blessings and grace, Who sanctifies those who believe in You, and ever heals those who hasten to You, receiving everything that we offer to You with goodness, receive also these apples, and bless them through the riches of Your goodness, and grant to those who partake of them the holiness of Your blessing.

May these be for healing of soul and body, for this authority belongs to You. Dissolve the bonds of barrenness for all those who partake of these apples, and richly grant them children as the grains of sand. Heal the wounds of the soul, and the pains of the flesh for those who seek Your help, through the reception of these apples. For we count your intercessions for protection, O Saint.

Send down the peace from above on all those who honor you, as the namesake of peace, and the faithful healer of God, the Prince of Peace. Grant to us to pass through life without reproach, that we be made worthy to partake of the food of Paradise, while we partake of the fruit of grace mystically, and are filled with sanctification and partake of salvation. Confirm in us the fragrance of grace, which we lost through tasting of the apples in Eden.

Renew within us, through your intercessions, the Holy Spirit, to strengthen us in all things. Strengthen us in the good fight, and with Your radiant Guardian Angel may we complete the road of the faith. That we might, together with the Angels of God, give glory, and offer Him worship, worshipping the unbegotten Father, giving glory together with the begotten Son, and honoring the All-holy Spirit: One Trinity and Godhead, to Whom belong glory and worship unto the ages. Amen.