The tale of St. John Cassian and St. Nicholas 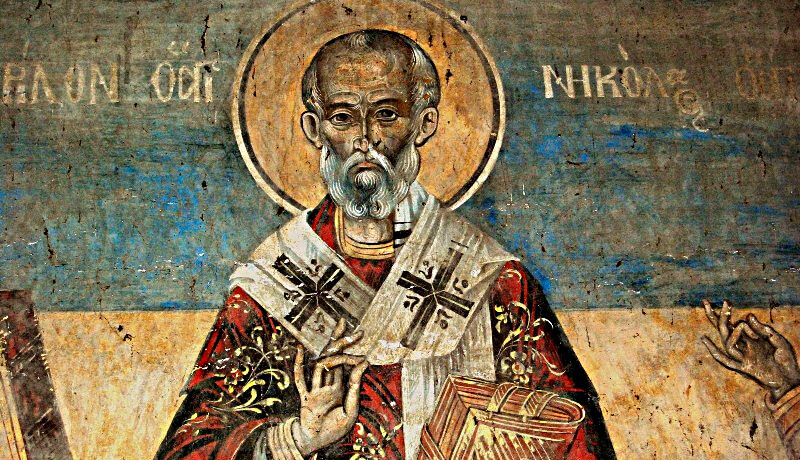 There are at least two versions of this folk tale about St. John Cassian and St. Nicholas. If you don’t know St. John Cassian you should. He was a theologian and deacon who worked with St. John Chrysostom. He brought monasticism from Egypt to the Western church. His writings were critical to the work of the Third Ecumenical Council. He may have been the first person officially declared a saint by the church in Rome.

But even with all that, you probably don’t know him. He’s fallen into obscurity, while St. Nicholas, who was far more obscure during his life, has become universally loved and honored by those in the Church, and even beyond. This must have struck people as an odd thing, and a story developed to explain it. I’ve heard two versions of the story, one Russian, and one Greek.

The Russian Story of St. John Cassian and St. Nicholas

It is said that St. John Cassian and St. Nicholas were sent by God to survey the Slavic lands, to see what condition the Church and the people were in. As they completed their mission and were preparing to return to heaven, St. Nicholas spotted a farmer whose wagon had gotten stuck in the mud.

St. John surveyed the scene. The wagon was in the muck up to its axels. The horses could hardly move. The farmer and at least a half a dozen people had waded into the mud, pushing and pulling and sweating and swearing.

“We can’t do that,” St. John said firmly. “Our robes will get filthy. We’ll be unfit to enter the Kingdom.”

But while the words were still on his lips, St. Nicholas had waded in. He first calmed the horses, then, putting his shoulder to the wagon with the men, he pushed. The other men pushed with him, others pulled, and one guided the horses. St. John stayed back a respectful distance, watching.

The wagon at first held firm, then, little by little, it moved out of the muck.

When they got to the gates of Heaven, God saw St. John Cassian’s sparkling white robe, and he saw St. Nicholas so covered in mud that it was impossible to tell what color his robe had once been. “Tell me what happened,” He said.

“There was this farmer,” St. Nicholas said, “and his cart and his horses were mired in the mud. I just took a few minutes to help them out before we came back.”

God turned to St. John. “And how did you manage to help this man without getting your robes soiled?”

“I didn’t, of course. You have clothed us in garments for the heavenly banquet, and I couldn’t possibly get them soiled with earthly cares.”

God looked at both of his saints, and his love flowed over them. “John Cassian, my beloved, you have indeed kept your heart in heaven, and your hands are clean of all things of the earth. And the heart of my beloved Nicholas is turned toward the people, however earthly their cares might be, and his hands are quick to help them when they call on him. And this,” he said, “this is why Nicholas, my beloved, has feast days in both summer and winter, and why he’s honored every Thursday besides. And this is why you, my beloved John Cassian, have but one feast day every four years.”

The Greek Story of St. John Cassian and St. Nicholas

It was Advent on Earth, and St. John Cassian couldn’t help noticing how many people were interrupting their preparations for the Nativity of Christ to honor his friend, St. Nicholas.

“Does this bother you?” God asked him.

St. John thought a moment before answering. Being a saint he was, of course, incapable of being jealous. “It does bother me,” he finally said. “Of course Nicholas died on December 6. It’s not his fault that his feast day falls during Advent. But surely the people could commemorate him on his other feast days. It’s not like he doesn’t have enough of them! Why, besides December 6, there’s his translation in May, and his birth in July. And every Thursday besides!”

“And he’s forever getting his wedding garments dirty, running about the earth, doing things for the people who call on him for help. I don’t get involved in worldly matters, as he does. I keep my garments clean, and my heart in heaven. Yet my memory is celebrated but once every four years, on the 29th of February. Why is that?”

St. Nicholas appeared that moment before God. His bright garments were dripping wet, and there was seaweed in his beard. “Forgive me, Lord. I was at the bottom of the ocean when you called, rescuing a sailor who was drowning. I had to get him to safety before I could come.”

God looked at St. John. “If someone calls you from earth, do you go?”

“Of course not,” he said. “I have laid aside all earthly cares.”

“But St. Nicholas cares deeply about the people on earth. He hears their voices when they call, and he is quick to help them. You, on the other hand, care only about what is heavenly. St. Nicholas wanders across the earth and the sea, wherever he is needed. You are as immovable as a rock. And so people call on him continually, and honor him throughout the year. The people are content to honor you once every four years, on February 29.”

St. John Cassian nodded. “With that honor,” he said, “I am content.”