St. John the Theologian and the Mother of God 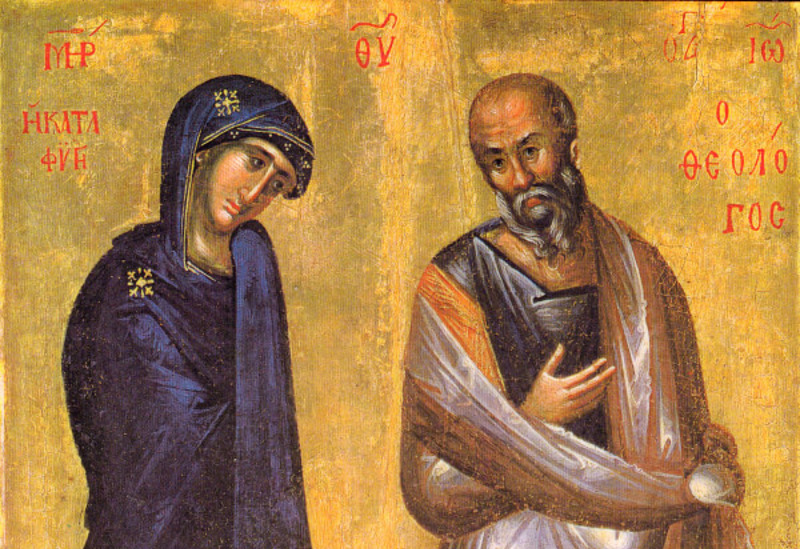 Today is Mother’s Day this year. It’s also one of the feastdays on which we commemorate St. John the Theologian, beloved friend of Christ, the author of the fourth Gospel, of the Revelation, and of three brief epistles that don’t get nearly as much attention as the epistles written by St. Paul.

But who was St. John?

Let’s start with St. Joseph, the Betrothed of Mary and the foster father of Jesus. Joseph and his first wife had seven children, four sons and three daughters. The boys were James, Joses, Jude, and Simon. The girls were Esther, Martha, and Salome.

Salome married a prosperous fisherman from Galilee named Zebedee. They had two sons, James and John. (This James is Joseph’s grandson. Presumably, he was named after his Uncle James, the son of Joseph who was later known as the Lord’s brother.)

So John was the grandson of Joseph.

Because Joseph was the foster father of Jesus, John and James were Jesus’ nephews.

Knowing that makes the story of the calling of John and James make a lot more sense. In the Gospel of St. Matthew, we read this:

Jesus saw two other brothers. They were James and John, the sons of Zebedee. They were sitting in a boat with their father, mending their nets. Jesus called them. At once they left the boat and their father and followed Jesus.

If Jesus had been some random stranger wandering by, that story would be really quite extraordinary. But Jesus wasn’t a random stranger. He was their uncle. Maybe they had traveled with him that time that their entire extended family traveled to Jerusalem and Jesus stayed behind, worrying his parents. When Jesus called them, they already knew him. They were ready to respond, because they already trusted him. They already loved him. And their father, Zebedee, seems to have been content to let them go with Jesus.

Although James and John were the sons of Zebedee, Jesus called them the Sons of Thunder. This doesn’t seem to be a reflection on Zebedee’s character. It seems to be his assessment of them. It seems that they were impulsive and hot-headed.

That’s not how we usually think of John. We think of him as a wise man, the apostle who spoke most eloquently about love. And of course, after a lifetime of loving and serving God, that’s exactly what he was.

But when he was young, there was less wisdom and more thunder. We see it the time when the disciples were traveling with Jesus through a village in Samaria, and couldn’t get lodging because they were on the way to Jerusalem. John and his brother James knew how to handle it – “Uncle Jesus! Let’s call down fire and brimstone on this town and destroy it!”

Jesus, of course, suggested that a better idea was to travel on to the next village, which is what they did. But this incident, and the nickname, makes you think that there were perhaps other incidents like this when John was young.

It seems that John’s mother, Salome, was impetuous, too. She asked Jesus to let her sons have the place at his right and at his left in the Kingdom. Jesus said someone else already had those places (and if you look at the iconostasis, you’ll see that those places go to the Jesus’ mother and to John the Baptist).

Jesus’ mother was, of course, John’s grandfather’s second wife. John was young — perhaps young enough that he grew up thinking of the Theotokos as his own grandmother. Perhaps not. In any event, we know that he took her into his own house and cared for her for the rest of her life.

O Apostle John, speaker of Deity,
The beloved of Christ our God,
Hasten to deliver your people,
Powerless in speech,
For He on whose bosom you lean
Accepts you as an intercessor.
Beseech Him, therefore,
To disperse the darkness of ignorance,
and pray for peace,
And great mercies to be shown upon us.

The Case of the Disappearing Name Day: My patron saint is St. Joseph the Betrothed, whose feast is the Sunday after the Nativity. Usually. But sometimes it gets moved.

The Story of Mary the Mother of God: A Review: This sweet picture book tells the life of the Theotokos through the stories from the Protoevangelium of James.

My Mother’s Birthday: My mother was impetuous. She was also talented, hospitable, and kind.