St. Macrina, Grandmother of Saints and Bridge of Theology 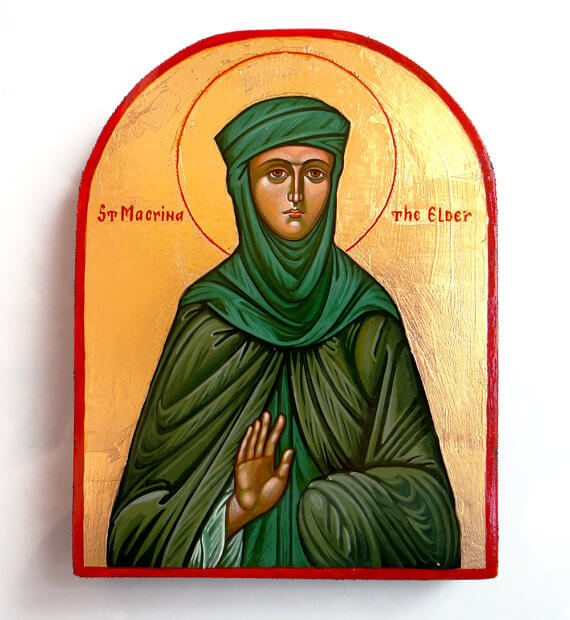 St. Macrina the Elder: Her family contains so many saints she’s known as the mother and grandmother of saints. She helped raise two of the three Cappadocian fathers. Her namesake granddaughter was one of the pioneers of monasticism in Asia Minor. Born sometime before 270 AD and a member of a rich, patrician family, St. Macrina the Elder grew up a pagan and was converted by St. Gregory the Wonderworker in her native city of Neocaesarea, in what we now call north-central Turkey.

Confessor of the Faith

St. Macrina lived almost half her life under the worst persecutions of the early Christian era. Diocletian and Maximian were determined to wipe out every evidence of Christianity and Christians, even if they had to kill every person in the empire to do it. St. Gregory Nazianzen describes the last persecution under Maximian as “the most frightful and severe of all.” Modern scholars agree with him.

Spared the fate of the martyrs, St. Macrina nevertheless suffered for her beliefs. She and her husband lost everything they owned, but managed to escape to the forests surrounding their city, and hid for seven years. Once the persecutions died down, they returned to Neocaesarea and she was known as a Confessor of the Faith.

St. Macrina had one son that we know of, Basil, who grew up to be as devout as his mother. He married Emmelia, a beautiful, devout Christian. Their household, including Macrina, was famed for its purity of soul, dedication to God and their generosity to the poor.

St. Basil and St. Emmelia had ten children, nine of whom lived to adulthood. St. Macrina the Elder taught her four eldest grandchildren to read from the Bible and raised them in piety and practical Christian values. These four held so strongly to the faith their grandmother taught that we recognize them today as saints: St. Macrina the Younger, St. Basil the Great, St. Gregory of Nyssa and St. Naucratius.

Macrina the Younger, after the death of her fiancee when she was between 12 and 14, dedicated herself to God, and gradually, over the course of her life, established first, a monastic household, and then a full double monastery at the family’s estate about a day’s travel from Neocaesarea.

The second grandchild, Naucratius, would have been an equally bright light in the history of the church. Abandoning a promising career in the law, he retired to the estate and adopted a small community of elderly men and cared for them in a proto-monastic community not too far from the villa in which his elder sister was conducting her own monastic experiment. He died in a fishing accident in his mid-twenties when the net became entangled in his legs and he was drowned in the fast-rushing Iris river.

The next two sons comprise two-thirds of the trio we know today as the “Cappadocian Fathers”. St. Basil the Great, Metropolitan of Caesarea, is noted for his defense of the Orthodox understanding of the Trinity, and for his work, in conjunction with his sister, on the organization and establishment of modern monasticism. His monastic rule is still used today, all over the world.

St. Gregory of Nyssa, more mystical and contemplative than his brothers and sister, lived for a time as a monastic, then married and taught rhetoric until he was likely widowed. He was unwillingly elevated to the See of Nyssa by his brother Basil. St. Gregory developed and extended Origen’s ideas on the otherness of God, and our ability to explore His nature. He stood for the faith against heresies at the Council of Constantinople in 381 and his, St. Basil’s and St. Gregory of Nazianzus’ contributions to our theology made a lasting impact on the Christian understanding of the Trinity.

St. Macrina the Elder died in approximately 340 AD, when her eldest grandchild, her namesake, was only twelve. She never lived to see her grandchildrens’ successes, or their spirited defense of our faith.

St. Macrina developed no new insights into our understanding of the faith. She left no letters, homilies or books. But by living what she believed, by being a mother and a grandmother, by teaching her children and grandchildren by word and example, by telling her children stories of her spiritual father and through her steadfast faith, St. Macrina the Elder became a bridge of theology, passing on the Tradition entrusted to her, and enabling one devout woman and two brilliant men to have impacts that we still feel and benefit from today.

Bev. Cooke writes for middle grade kids, young adults and grownups. Her book, Keeper of the Light, published by Ancient Faith Ministries, is a mid-grade historical fiction about St. Macrina the Elder. She lives in Victoria BC with her husband and two spoiled, slave-driving cats and attends All Saints of Alaska OCA parish.

The icon of St. Macrina the Elder is by Agnessa, a self-taught artist living in Bulgaria. Agnessa makes original hand-painted Orthodox icons using traditional techniques. The image of the icon is used with her permission.

St. Gregory, the Saint of Three Names: It can be hard to keep all the St. Gregories straight.

The True Cross: Shortly after the Council of Nicea, St. Helena went to Jerusalem and found the True Cross. What became of it after that?

St. John the Theologian and the Mother of God: What was the relationship between St. John and the Theotokos?