St. Maria, the Niece of St. Abramius the Recluse 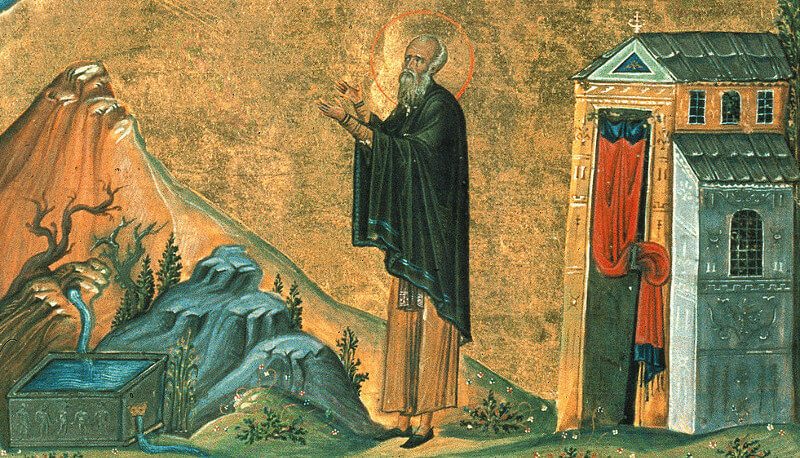 Although St. Abramius and St. Maria are glorified together, their story almost always focuses on Abramius. Maria comes in like an afterthought. But I think it’s really Maria’s story. Everything in St. Abramius’s life before he took her in was just preparing for her.

Abramius was born in the first year of the fourth century. His parents were wealthy and important people, and they arranged a good marriage for him. But seven days after the wedding, he abandoned his wife and his parents. He went to live in an abandoned hut about a mile outside the city. There he stayed, living in silence and strict asceticism. And over the years, through his prayer and asceticism, he developed the virtues of humility, chastity, and love.

When his parents died, Abramius asked a close friend to distribute his entire inheritance to the poor. He walled himself into his hut, allowing only a small opening through which he could receive food and communicate with other people. He never wanted to leave his hut, seeing it as the place of his salvation. And he never left, except on two occasions.

The first time he left, it was an act of obedience to his bishop, and he was away for several years. The second time, though, he chose to leave.

The Second Departure of Abramius

When Abramius’s brother died, he left Abramius his fortune and his seven year old daughter, Maria. Abramius had the fortune distributed to the poor, and he took Mary to live with himself. He moved into the inner cell in his hut, and left the outer cell for her. There was a small opening through which they could communicate. And Maria undertook the same ascetic labors as her uncle, and developed the same virtues.

But as it happened, there was a monk who sometimes visited her uncle who thought she was beautiful. He wanted her, and eventually he seduced her. When she realized what she had done, she was certain that neither her uncle nor God would want to have anything to do with her. So she ran away and moved into a brothel. She was, in her own mind, already corrupted and defiled, so a brothel seemed like the right place for her.

Her uncle, of course, was distraught. He didn’t know where she was, but he prayed for her night and day. After two years, he got word where she was.

Then he broke down the door of his hut, and had friends bring him a military uniform, a horse, and a gold coin. He pulled the hood of his cloak up so he couldn’t be recognized. Then he rode to the brothel.

St. Abramius at the Brothel

Abramius told the innkeeper that he was looking for a particular young woman, and the innkeeper knew who he meant. The innkeeper called Maria. Maria didn’t recognize her uncle. She saw only another man who wanted her body.

And so Abramius, who had not eaten meat nor drunk wine for fifty years, now ate meat and drank wine in a brothel, because he loved his niece. And the angels saw, and were astonished at his wisdom and compassion.

And when they retired to her chamber, he revealed himself to her, and talked to her gently. “Just come home with me,” he said. “I’ll pray for you, and I’ll take your penance on myself. And on the day of judgment, any sin of yours, I’ll answer for. Just come back to our cell.”

The Return of St. Maria

With many tears and gentleness and much pleading he spoke. And Maria fell into a swoon. When she recovered, she agreed to leave the brothel return with her uncle to the cell where they had lived.

They left everything behind. And when they got to their cell, he placed her in the inner cell, and he took the outer cell. For ten years, until Abramius’s death, they prayed and fasted and glorified God together. After Abramius died, Maria lived another five years, before she too died. And after her death, it was said, her face shown like the sun.

Although St. Abramius and St. Maria are glorified together on October 29, St. Maria doesn’t get a mention in the hymns for their feast day.

The image of God, was faithfully preserved in you, O Father.
For you took up the Cross and followed Christ.
By Your actions you taught us to look beyond the flesh for it passes,
rather to be concerned about the soul which is immortal.
Wherefore, O Holy Abramius, your soul rejoices with the angels.

The Emerald of God, St. Euphrosyne of Alexandria: St. Euphrosyne didn’t want to marry the man her father picked out for her. In fact, she would rather be a man than be married.

The Story of Pelagia the Penitent: The courtesan Margarita traded her beauty, and her body, for wealth and fame. Until Bishop Nonnus began to pray.