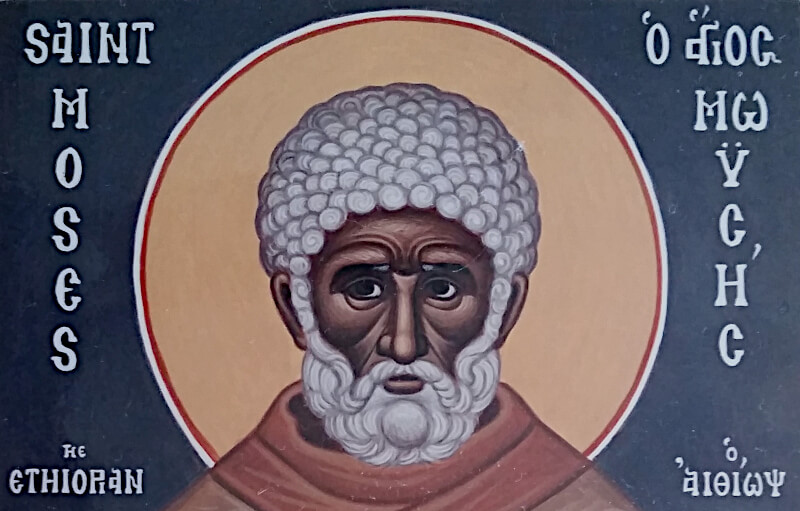 If St. Moses the Black had another name before he joined the monastic community in the Egyptian desert, I don’t know what it was.

It’s possible, I suppose, that his parents named him Moses, and that he kept that name when he was received into the monastery. But it seems more likely that he had another name, and that he was given the name Moses when he became a monk.

But why Moses? Did the fathers at the monastery want their lawless novice to live with a constant reminder of the law of God?

They knew his history, of course. He was from Ethiopia, or perhaps Nubia. A giant of a man, he had once been a slave. But obedience and poverty didn’t suit him. He stole from his master, ran away, and became the leader of a band of highway robbers. He was violent and cruel, greedy, and driven by lust. Lust for sex. Lust for wealth. Lust for power.

Until, fleeing the authorities, he took refuge at a monastery in the Scetis Valley. Joining a monastery, taking on a new name, a new way of life, was one way that a notorious criminal could disappear for a while. When things cooled down, he could leave the monastic life, just as he’d left his life as a slave.

He stayed. He stayed and he struggled. There were times that he wanted to return to his life as a highway robber, a life where he had power and control, a life where no one dared to speak to him with disrespect. His fellow monastics abused him and provoked him.

Eventually he learned how to exercise power and control over himself. He learned to remain calm, and he learned not to respond to abuse with abuse. But when another monk asked him if he was as calm on the inside as he was on the outside, he replied with a single word: No.

What good was it, another monk asked, to have outward peace without inward peace? How was that part of the ascetic life?

The monks’ spiritual father answered, telling him that the outward peace that Moses the Black had achieved kept him from hurting others.

And hurting others was something that Moses was capable of, even at the monastery. There was a time when four men attempted to rob the monastery. They encountered Moses, who beat them up before remembering that he must not kill them. So he tied them up and carried them into the church. Dumping them on the floor in front of the brotherhood, he said, “I know I can’t harm them, so what am I supposed to do with them?”

The robbers were so shocked that they also became monks.

A Life of Repentance

Step by step, day by day, Moses the Black gave up his old life, repented, and grew in humility. Knowing his own sins, he steadfastly refused to judge anyone else.

And when, after many years, he was warned that barbarians were coming to attack the monastery, he remained steadfast. He helped the other monks escape, but he refused to leave with them. He said that he had been expecting such a day. His Master had said that those who take up the sword would perish by the sword. Moses the Black trusted that his Master’s words would come true.

He didn’t stay behind to defend the monastery, as he had once done. Instead, having achieved complete control over himself, he welcomed the marauders to the monastery as guests. But they refused the hospitality, murdering Moses and the seven monks who had stayed with him.

And so he died, as he knew he must. And God granted him a Christian ending to his life, blameless and peaceful.

O Holy Father Moses, intercede with Christ God that He may grant us great mercy!

Troparion to St. Moses the Black

The Parable of the Great Feast: The Master of the Feast had to send out three rounds of invitations to fill his tables. Who was on his C list?

Pascual and the Kitchen Angels: Pascual wanted to feed the poor. When he went to the monastery, they made him a cook. But he didn’t know how to cook! So the angels did his work for him while he prayed.

The Uncondemning Monk: He was a terrible monk! He didn’t fast. He was lazy and undisciplined. But never in his entire life did he ever judge or condemn another person. And that was enough to make him a saint.