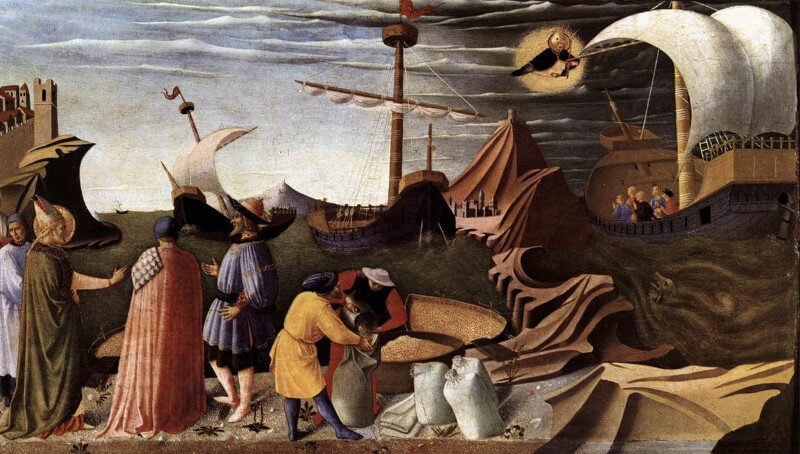 When Nicholas was Bishop of Myra, a great famine came over the land of Lycia. Hunger and death became familiar companions. The bishop prayed for his people, of course. But even he could not turn stones into bread.

When Bishop Nicholas finished his prayers, he walked towards the back of the church. He had heard someone slip in while he prayed, and the young man with hungry eyes was still standing quietly near the door.

“Your Eminence,” he said, “there are ships full of grain in the harbor. They’re going from Alexandria to Constantinople, and they’ve stopped here for supplies.”

Bishop Nicholas nodded. “Let’s walk to the harbor, then,” he said. “And let us go quickly.”

Hunger can make people do strange things, Bishop Nicholas thought. Things they would never do if their bellies were full. And if his hungry townspeople decided to try to seize the ships, that would not go well.

Crowds had already formed when the bishop arrived. The captain and some local citizens were shouting at each other. Bishop Nicholas couldn’t make out the words, but he didn’t need to. He could see the messages in the way the men were standing, their gestures, the tone of their voices.

As he approached, the crowd sighed and fell silent. The bishop and the captain greeted each other courteously.

“As you have no doubt heard,” Bishop Nicholas said, “the harvest has failed here in Lycia for three years running. My people are hungry. Many have died. Christ our God commands us to feed the hungry, and I could command you to unload a little grain from each of your ships, that we may not perish from the famine. And yet, I will not command it. I ask you, as one who gives you the Bread of Life in the Eucharist, to give grain to my people, that they may have bread to save their lives.”

The captain was moved by these words. “If I could,” he said, “I would gladly give you the entire cargo, to save so many lives. But I can’t give you what is not mine. These aren’t my ships. The grain isn’t my grain. It belongs to the city of Constantinople. There is nothing I can do.”

An answer to prayer

There was murmuring in the crowd. Bishop Nicholas silenced them with a glance. His head was pounding. He needed quiet so that he could think.

“And yet,” he said to the captain, “and yet you sailed into the harbor as I was praying and asking God to send grain to my people. It seems that you are the answer to my prayer.”

The captain smiled in spite of himself. “I’m not often called that,” he said.

“And yet, at least this time, it appears that you are.”

“I wish it were true. But if I fail to deliver the full amount of grain, it would cost me my ship, and perhaps my life.”

Bishop Nicholas nodded. “What if I promised to send full payment for the grain that you left here? I am known in Constantinople. I believe that my credit would be accepted there. And it is not gold that the church here is lacking. It is grain.”

The bishop said no more. Nor did anyone in the crowd. The captain frowned for a time in the silence. Then the frown smoothed itself out. The captain nodded.

“Then have your men unload a hundred measures of wheat from each ship. While they work, I will draft a letter of indemnity, and seal it with my ring.”

In Constantinople and in Lycia

And so they did. The next morning, with a favorable wind, the ships left Lycia and continued to Constantinople. When the ships were unloaded and their cargo measured, every ship had exactly the amount of grain on board that they’d had when they left Alexandria. The captain asked to have the amounts verified. And the numbers didn’t change.

So the captain took that information, and his letter from St. Nicholas, and went to the treasury official to tell him what had happened. The Bishop of Myra was, indeed, known in Constantinople. Everyone began speaking of other miracles he had worked, and praising God for such a bishop.

Back in Myra, Bishop Nicholas distributed the grain so that everyone received a portion. And the grain from the ships didn’t run out until two years later, when at last the drought broke, and they scattered some of the seed in their fields, and it yielded a fair harvest. And so it was that all of Lycia enjoyed God’s kindness through the entreaties of St. Nicholas.

St. Nicholas, Thursday prayers, and pirates: Why do we commemorate St. Nicholas every Thursday in our weekly cycle of prayers? It all started in the year 842, when pirates captured the ship that was taking the poet Joseph to Rome.