St. Nicholas of Pskov, the Fool for Christ 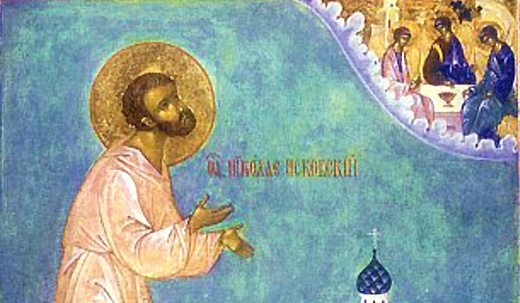 In the Orthodox Church, we have lots of different categories of saints. Most of the categories are easy to understand. Martyrs died for the faith, and confessors suffered for the faith. Unmercenary saints provided medical care without charge, and wonderworkers performed miracles.

And then there are the fools for Christ. A fool for Christ is someone whose behavior is so far outside the accepted social norms that they might be accused of insanity. But fools for Christ are not insane. Instead, like monastics, they have chosen to give up the good things of this world for the sake of the Kingdom of God.

But the holy fools go far beyond monastics. They give up ordinary relationships with other people. And not just worldly relationships or family relationships; the holy fools are not part of any society or community. They choose to be nonconformists, misfits, anti-authoritarians. This extreme choice gives them extreme freedom. In times and places where tyrants rule, holy fools are free to say things that others can’t say. Because they have given up everything, they have nothing to lose. And, paradoxically, that is a position of incredible power.

A Holy Fool and a Terrible Tsar

Take the example of St. Nicholas of Pskov. God had granted him the gifts of clairvoyance and of prophecy. But it was hard, perhaps impossible, to be part of a community with these gifts. So St. Nicholas was not part of his community. He abandoned all of his social relationships and lived in a cell under the bell tower of the church. And as he ran about the city, he would rebuke people publicly for their secret sins, telling them what would happen if they did not repent.

Ivan the Terrible thought that the citizens of Pskov had committed treason, and on the first Saturday of Great Lent, he came to the city to destroy it. The people all set bread and salt in front of their homes – a customary offering to a guest. But they all hid, all except the mayor. The mayor stood with courage, offering the tsar a tray with bread and salt.

And the Terrible Tsar knocked the tray from his hands.

At that moment, Nicholas the Fool for Christ came riding towards the tsar and the mayor. Not riding a cart, or riding a horse, but riding a stick, as children do. The holy fool said, “Ivanushko, Ivanushko, eat our bread and salt, and not Christian blood.”

Ivanushko is the sort of nickname someone would use with a baby or a toddler. It’s not the way you’d address the tsar. Especially not one known as “the Terrible.”

And Tsar Ivan wasn’t pleased. He ordered his soldiers to grab the fool riding the stick horse. But the fool had disappeared.

Someone must have told the Tsar that this fool wasn’t an ordinary fool. Tsar Ivan went to church, venerated the relics of a saint, and said that he wanted to receive the blessing of the holy fool Nicholas.

There’s a saying that you should be careful what you ask for. Nicholas the fool for Christ told the Terrible Tsar that he must not plunder the city, as he was planning to do. If he did, his favorite horse would die.

But Tsar Ivan had already changed his plans once. He had decided not to kill everyone in Pskov. But he still intended to plunder the city. He sent his men out to take what they could, and he had the church bells taken down so he could cart them away.

And his favorite horse promptly died.

And St. Nicholas the Fool for Christ invited the tsar to come visit him in his home under the bell tower. When the tsar arrived, Nicholas the fool offered him water to drink and raw meat to eat.

The Terrible Tsar was enraged. “I am a Christian!” he shouted. “I don’t eat meat during Lent.”

“You do worse than that,” Nicholas replied. “You eat human flesh and drink human blood.”

And the Tsar was taken aback. So much so that he told his soldiers to quit looting, and he fled the city. Thus a beggar armed only with truth and courage defeated an emperor and his army.

St. Nicholas the holy fool was considered a hero by the people of Pskov. When he died some years later, he was buried in the cathedral of the city he had saved. This was an honor that was granted only to princes and bishops. But St. Nicholas of Pskov had become a prince to his people.

Matushka Olga, Healer of the Bruised and Broken: Matushka Olga hasn’t yet been officially glorified, but she’s widely venerated, especially by women who have been abused.

Vasily and the Dragon: A Review: Marko the Rich is determined to kill Vasily the Unlucky, but it’s hard to do, given that St. Nicholas is on the boy’s side.

The Magic Babushka: A Review: A near-sighted girl saves a butterfly from a spider’s web in this Russian story, and learns what it takes to make wishes come true.