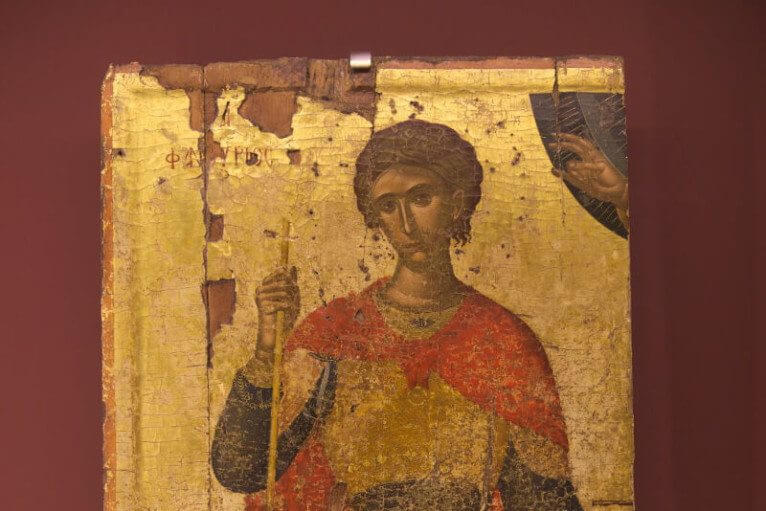 It was a drizzly afternoon, a couple of Thursdays ago. I was standing at my bus stop, sending a text to my husband, letting him know that I was catching a later train than usual. Bus arrived. I clicked Send, furled my umbrella, dropped my phone in my purse, pulled out my transit pass, and got on the bus.

And I was ready to cry. I figured I must have dropped it on the sidewalk at the bus stop, and it was gone forever. But I took a deep breath, said a brief, half-hearted, and not exactly faith-filled prayer to St. Phanourios, and went on home.

St. Phanourios and His Mother

Nobody knows much about St. Phanourios. We wouldn’t know about him at all, except that there was an icon depicting his life and martyrdom that had been lost for many centuries, and then was found. And perhaps for that reason, or perhaps for some other reason, people began asking St. Phanourios for help finding lost things.

But, as I’ve said before, I grew up Presbyterian. I’ve learned to love the saints, and to ask for their prayers. But it’s been a long journey, taken in fits and starts.

And so that Thursday, when I asked St. Phanourios for help, I felt a bit silly for doing so. I didn’t expect him to help me. I expected to have to buy a new phone.

When I got in the house, I dropped my umbrella in the umbrella bin, hung my purse and my computer case on the doorknob of the hall closet, and asked my youngest if he’d dial my phone, just in case. And he did.

And the umbrella stand started ringing.

I had dropped my phone into my furled umbrella.

A Prayer for St. Phanourios’s Mother

O Lord, give rest to the soul of your departed servant, the mother of St. Phanourios, in a place of brightness, a place of refreshment, a place of repose, where all sickness, sighing, and sorrow have fled away. Pardon every transgression which she ever committed, whether by word or deed or thought. For you are a good God, and you love us all.

St. John the Almsgiver: St. John was the patriarch of Alexandria. He counted the poor as his masters, and served them in all things.