St. Scholastica and the Thunderstorm 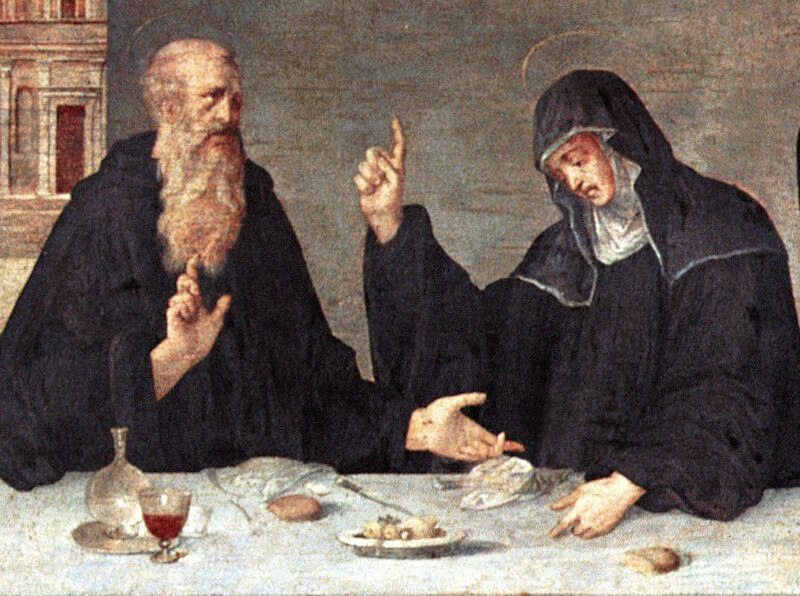 We don’t know a great deal about St. Scholastica. And most of what we do know, we know because she was the twin sister of St. Benedict. Because we know when and where he was born, and who his parents were, we know that about her, too.

We also know that, when he went off to school, she didn’t go. Young men got an education. Young women stayed home until they got married.

But twins often share interests. St. Benedict didn’t want to find a young woman to marry; he wanted to devote himself to God’s service. St. Scholastica seems to have wanted the same thing. And the two of them ended up founding monastic communities. St. Scholastica’s community for women was about five miles away from her brother’s community for men.

Five miles is not an extraordinary distance. But St. Benedict’s rule required them to return to their own communities before the end of the day. It was difficult for either of them, after having done all their work for the day, to walk to the others’ monastery, to visit, and to get home on time.

So they saw each other but once a year, at a farm house about halfway between their communities. There they would spend the day in prayer and worship and talk of spiritual things.

One year, when St. Benedict was preparing to leave, St. Scholastica asked him to stay for the night. Perhaps she knew that she wouldn’t live another year. Perhaps there was another reason she wanted him to stay. But he was irritated, and he refused.

So she bowed her head, and prayed, and when she looked up, a storm broke. Not just rain, but a storm that raged with such fury that it was impossible to leave the farm house.

“My sister, what have you done?” said St. Benedict.

“I asked a favor of you,” St. Scholastica replied, “and you refused me. So I asked God.”

What could St. Benedict say to that? He stayed, and they continued their visit through the night, to the next day. When the storm finally ceased, St. Benedict returned home.

And three days later, he saw his sister’s soul ascending to heaven in the form of a dove. He sent to her monastery, and retrieved her body, and had it buried in the tomb he had prepared for himself.

And when he died, he was buried with her in the same tomb.

St. Gorgonia the Audacious: Everything we know about St. Gorgonia, we know from her brother, St. Gregory the Theologian. He said that she always did what was expected of a pious Christian woman. Except when she didn’t.

The Story of Peter and Fevronia: Peter was the Prince of Murom. Fevronia was a peasant. They married, and for the sake of their love endured exile and poverty. And yet they became the patron saints of love and happy marriage.

St. Irene and the Apples of Paradise: St. Irene was supposed to marry the son of the Empress Theodora. But he married someone else before she got to Constantinople, so she became the abbess of the monastery of Chrysovalantou.