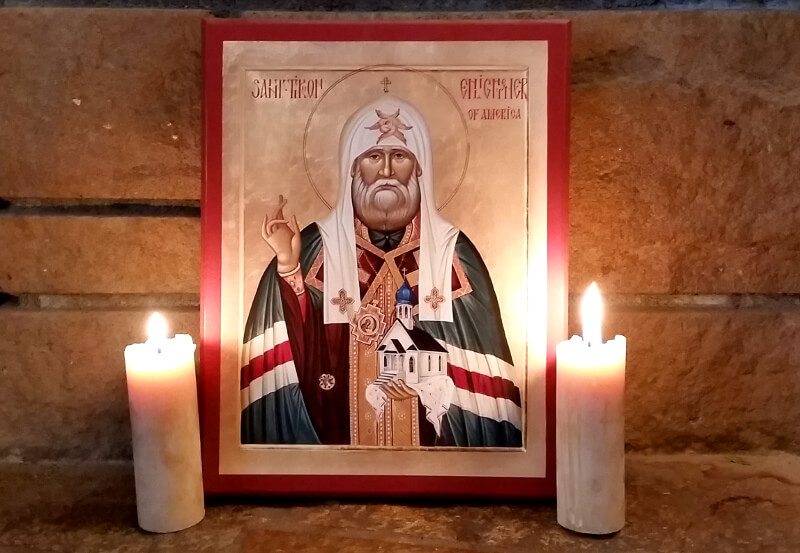 I had never realized that St. Tikhon, Confessor and Enlightener of North America, died on the Annunciation. I thought that I should have realized it, given the saint’s long association with our parish. But I know that, any time a saint’s day is on a major feast, the saint gets ignored.

And it seemed that he was thoroughly ignored. When I looked at the calendar, I couldn’t find anything to indicate that it was his day. Not until I flipped the calendar to April, and saw him on the 7th. April 7. Old Calendar Annunciation. Of course.

Our parish has a tiny little temple up on the shoulder of Mt. Rainier, in a tiny little town called Wilkeson. There’s not much in Wilkeson today. Fewer than 500 people live there. There’s a post office and a grocery. There’s a restaurant, but no fast food. The Fraternal Order of the Eagles have a lodge.

But if you walk out in the woods, you might trip on the foundations of buildings that lined the streets of the town a hundred years ago, when coal was being mined in the mountains around Wilkeson, and some 3,000 people called Wilkeson home.

Many of the coal miners who settled in Wilkeson were Orthodox. They were Arabs, Greeks, and Slavs, as well as people who had been part of the Eastern Rite of the Roman Catholic Church. They formed a prayer house, but they had no clergy and no proper church. At least twice in the 1890s, an archimandrite visited the community.

In the 1890s, Vasily Ivanovich Bellavin, the son of a rural priest, returned from seminary to his home town of Pskov, where he took monastic vows and was given the name Tikhon. And in 1897, while the Orthodox community in Wilkeson was still meeting in their prayer house, the monk Tikhon became Tikhon, Bishop of Lublin.

In 1900, he visited the Orthodox community in Wilkeson, Washington, serving the liturgy in their new building, which they called Holy Trinity Orthodox Church. He returned in 1902 to consecrate the building.

In an icon, if the saint is holding a model or replica of a church building, that means the saint consecrated the building. The icon of St. Tikhon that you can see at the top of this post shows St. Tikhon holding the little blue-domed Holy Trinity church. It has the following words affixed to the back:

At the base of the Altar Table in Holy Trinity Temple built in 1900, are two boards, running in an “X” shape from opposite corners. In the center of these boards there stands a simple wooden cross, about 12” high. On the top of this cross a hole has been drilled and filled with mastic — a natural resin, the relics of a saint whose identity is unknown to us is embedded in the mastic. On the top arms of the Cross the following inscription is written in Russian longhand”

“September 22, 1902. Consecrated to the Life-Giving Trinity. The Most Reverend Tikhon of the Aleutians and N. America.”

St. Tikhon (Bellavin) served the North American Orthodox Mission from 1899 to 1907. He was elected Patriarch of Moscow in 1917, died a Confessor’s death in 1925, and was glorified by the Russian Orthodox Church in 1989, with the title “Enlightener of North America”. In 1994 Holy Trinity Temple received a portion of the holy relics of St. Tikhon from His Beatitude Metropolitan THEODOSIUS. “By the prayers of Thy Saint, O Lord, preserve Thy people in peace.”

St. Nicholas of Pskov, the Fool for Christ: A holy fool and a terrible tsar meet in Pskov.

Christmas Eve and Theophany: Holy Trinity is still up in the mountains, but the people of that parish are now at Holy Resurrection, in the valley, where they have a bicalendar parish.

Christ is Risen, and I Need Sleep: To imagine Pascha, think of what it would be like if you combined the celebrations of Easter, Thanksgiving, Christmas, New Year’s, and Fourth of July all over one long weekend.