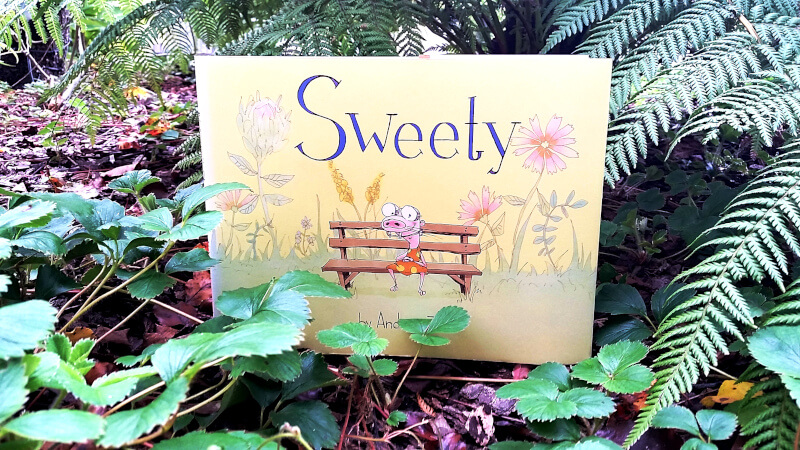 The moment I saw the weird little girl on the cover of Sweety, I knew I had to have it. I didn’t know what the story was about, and I didn’t know what kind of a creature Sweety was. It didn’t matter. I could see that she was wearing orthodontic headgear. And that was enough.

I wore orthodontic headgear for YEARS, and I have never, ever seen a character in a picture book wearing it! And while I have long known that representation matters, I’ll have to admit that I may not have understood exactly how much it matters. I look at a lot of picture books. And the picture of Sweety sitting alone on the bench, with her enormous glasses and her orthodontic headgear grabbed my attention and my heart in the way that no other picture book cover has ever done.

The story begins, “Sweety was awkward. Even for a naked mole rat.”

I mean, how could you not be awkward, if you had to wear orthodontic headgear? Of course she was awkward. So was I. Those few words made me love Sweety even more.

The issue with anthropomorphic animals

I don’t usually love picture books where the characters are anthropomorphic animals. For one thing, they displace books about people. And in a world where so many, many children never see people like themselves in books, that’s a problem.

And, for another, children don’t identify as readily with anthropomorphic animals as they do with people. They enjoy books with animals as the main characters. But few such books have the same impact on a child that books featuring people do.

The exceptions seem to be books like Charlotte’s Web, where the animals are, well, animals. Charlotte is a spider. Wilbur is a pig. They may be able to speak and reason as humans do, but they retain their essential character as animals. And the story couldn’t be rewritten to make it about humans.

That’s not true of Sweety. The naked mole rats in the book have nothing in common with the animals. Except their faces. Their tiny eyes and piggish noses and two long teeth suggest the faces of naked mole rats. But there is nothing the least bit like animals in their characters. Their essential character is human.

Given that, I want to say that Andrea Zuill (who wrote and illustrated Sweety) should have gone ahead and made the book about humans. There’s no reason for the characters to be other than human. But I can’t be too pedantic about that point. Because Sweety reached out from the cover of the book and grabbed my heart.

And not just mine! The day I brought Sweety home from the bookstore, we had friends over for dinner. And one of our friends saw the book on the coffee table. They picked it up, smiled, and said, “I had to wear headgear when I was a kid!” And they sat down and read the book with absolute delight.

For all of us, it seems, in matters big and small, representation really does matter.

Besides the headgear, there was another way that I identified with Sweety. Like her, I was an awkward child. I didn’t do interpretive dance, or talk constantly about fungi. But my interests were just as intense and just as eccentric. Like Sweety, I didn’t know how to match my intensity to other people’s interest. I didn’t understand how to read social cues.

I’ve often thought, looking back over my childhood, that had there been any concept of autism spectrum when I was young, I might have received an ASD diagnosis. It’s hard to say now, so many years later. But for sure, like Sweety, I was a square peg.

Her beloved Aunt Ruth told her that she was called a square peg, too, when she was growing up. And “Aunt Ruth said that being different was one of the best things about her life, and that if you stayed true to yourself, you’d find your people.”

That thought comforted Sweety. But she wasn’t sure what to do about it. She thought about how she might try to find her people. But her ideas were too awkward, even for her.

So she just continued to rhapsodize over mushrooms.

Until she met another naked mole rat who loved them just as much as she loved them.