It’s the Synaxis of the Archangel Gabriel — But Why? 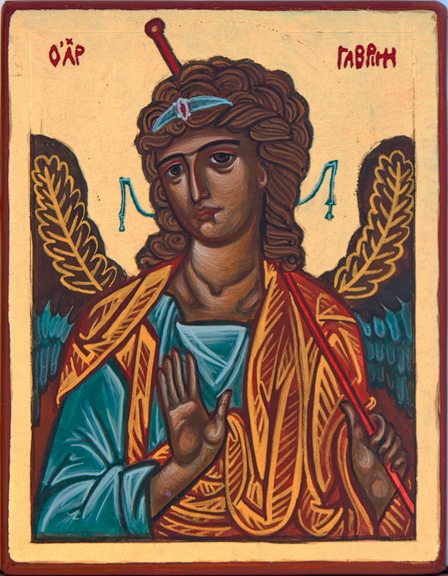 When I looked at the calendar, I saw that today was the Synaxis of the Archangel Gabriel. “But wait!” I said to myself. “The Synaxis of Gabriel is on the day after the Annunciation! In Lent. But it’s not Lent. It’s July!”

I looked at the calendar again. If today is a synaxis, that means yesterday must have been a feast celebrating something that Gabriel was involved in. That’s how synaxes work. We celebrate the Baptism of our Lord on one day, and the Synaxis of St. John the Baptist the next. We celebrate the Birth of Jesus on one day, and the Synaxis of the Theotokos the next.

So, what was celebrated yesterday?

The Martyrs Proclus and Hilary. I looked up their stories. Nothing about Gabriel.

We also celebrate St. Veronica, and St. Paisios of the Holy Mountain. Nothing about Gabriel there, either.

So why is today the Synaxis of the Archangel Gabriel?

It goes back to the ninth century. Some sources suggest that a church in Constantinople may have been dedicated to Gabriel on July 13 (or perhaps October 16), and so the day of the dedication of the Church became a second feast for St. Gabriel.

What seems more likely, to me anyway, is that there were in the ninth century very many people and churches who had St. Gabriel as their patron. Because their name day fell during Great Lent, on the day following the Annunciation, they never felt like they got to celebrate it properly. So some priest or bishop decided to repeat the celebration in mid-July. Economia. On the long hot days of July, it’s good to have something to celebrate.

Over time, people decided that, because the March feast day celebrates Gabriel’s participation in the Annunciation, this feast day would celebrate all of the times he appeared to people throughout history. So we celebrate his appearances to Moses and to Daniel. His appearance to St. Anna, the Grandmother of Jesus. His appearances to Zaccharias, to Mary in the temple, to Joseph, to the shepherds, to the myrrh-bearing women.

So I suppose this feastday could be seen as a special sort of synaxis, a synaxis of appearances.

For all who have St. Gabriel as your heavenly patron, happy name day! May God grant you many years!

Randi Maria Sider-Rose is an iconographer who lives and works in Pittsburgh, Pennsylvania. I met her at the St. Emmelia Homeschool Conference at Antiochian Village, when she was kind enough to pick me up at the airport and get me to the conference. I didn’t learn until much later that she’s an iconographer. She provided a lovely explanation of the Icon of the Anastasis for this website, and she developed our glass icon project. You can see more of her work at Immanuel Icons.