The Creation of Catherine’s Family 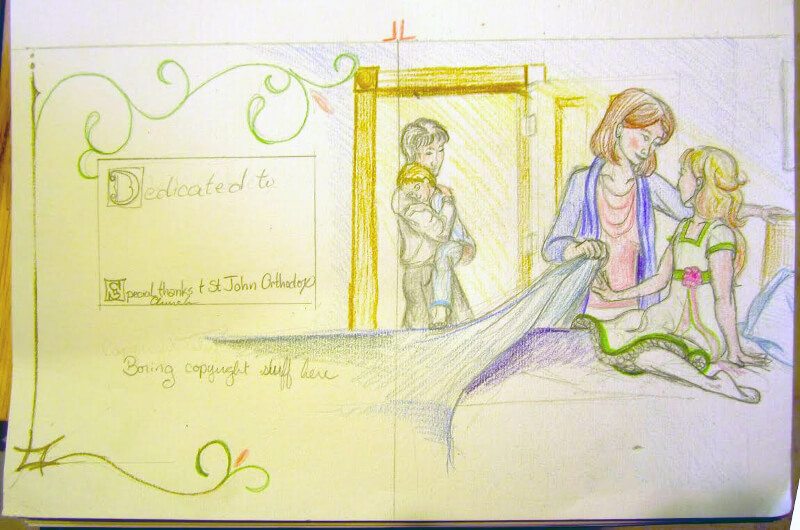 It’s that time of year again — Thanksgiving. Time for family, time for reflecting on the year with gratitude. 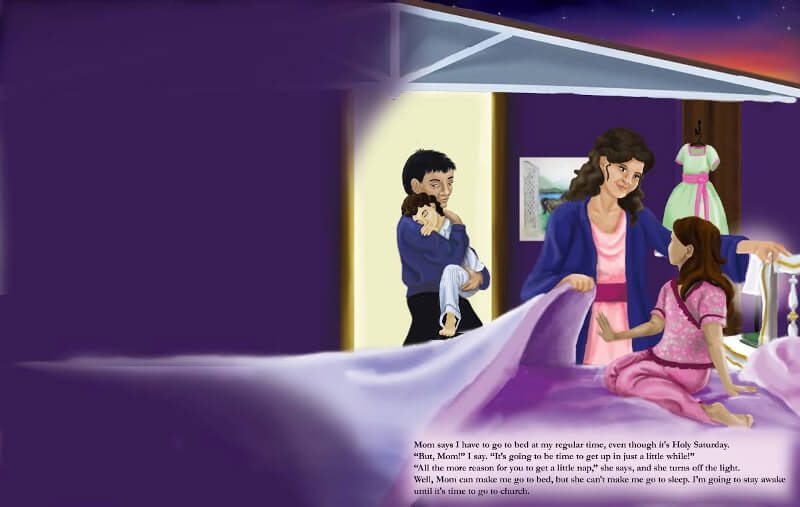 My memory of Thanksgiving 2014

Since tomorrow is St. Catherine’s Day, Charlotte and I thought perhaps you’d all like to hear a little bit behind the creation of Catherine and her family.

From what Charlotte and I understand, authors and illustrators rarely work in tandem in traditional houses. The author writes, the illustrator (if not the author him or herself) is assigned by the publishing house, and only rarely do they interact with one another. This was certainly the case with Agatha Christie’s British cover designer—in an interview, he said he never met her during the twenty years of “working together.” Charlotte had been warned that, should her illustrator choose to make Catherine a bunny, attending church with a ducky, and other furry animals, there would be little she could do about it.

But in this case, Catherine’s Pascha became, visually, a collaborative project. I’d draw, she’d give feedback. Things would change, refine, improve. In the beginning, things changed A LOT.

There are a lot of stories about how Catherine’s Pascha ended up looking the way it did, and a lot of the credit goes to God. Really, there were things that happened, images that appeared at the right time, solutions that came to one or both of us just in time. There is no other way to explain it.

The first questions I asked were “How old do you think Catherine is?” and “How do you see them in your mind?” The first answer was “Catherine is about six years old, or thereabouts.” The second question was more complicated. Catherine’s Pascha had been written twenty years earlier, and had only just been resurrected. Charlotte said she remembered thinking one child was dark-haired and one fair. But she’d have to think about it, now that I’d asked.

Thankfully, I have three little ones, one of whom was quickly nearing her 6th birthday. Many of the poses you see of Catherine are based on my oldest two. I did a number of life sketches, while they were “still” (thank you Prof. Larry Blakely for forcing my drawing class to do 10-60 second action sketches on multiple occasions!).

That led to the first initial sketch for Catherine’s Pascha. The “framing” idea was still in the future, as you can see. And as you can also see, Catherine and her mom looked different from what you see. Catherine felt slightly “off” to me, but I sent the layout to Charlotte anyway to see if that was somewhat close to what she’d imagined.

The first sketch for Catherine’s Pascha.

Charlotte loved the layout, said it made her cry … but in the meantime, she had remembered how Catherine looked. Catherine was the dark-haired little girl and her mother was Greek. Elizabeth was blond.

Now where am I going to find Greek families for reference images…?

All over one of my favorite movies. 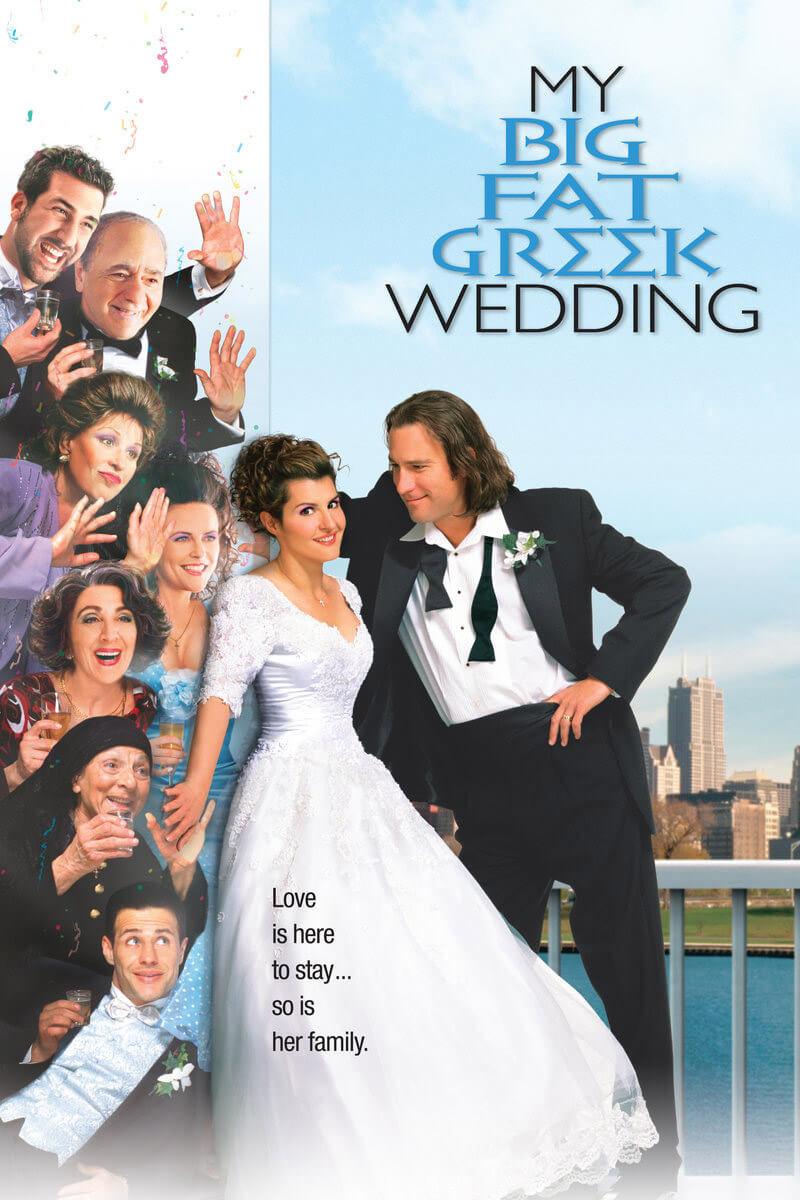 A favorite movie; the poster shows Nia Vardolos, who was the model for Catherine’s mom.

My Big Fat Greek Wedding has a special place in my heart. It came out shortly before my own wedding in July 2002, and my mother took me to see it on a special “Girl’s Night Out” about a week before the big day. We laughed until our sides hurt … then we shopping for things for the honeymoon! It’s one of my favorite memories of my wedding, spending that time with Mom.

Not surprisingly, she bought that movie for me for Christmas, and it’s come with me through three interstate moves and several smaller ones.

There is actually a scene in My Big Fat Greek Wedding that takes place on Pascha when the family all celebrated together. The “What do you mean, he don’t eat no meat—that’s okay, I make lamb!” sequence is part of that scene. In the movie, Toula (portrayed by Nia Vardolos) may feel overwhelmed at how much family she has, but they all gathered for Pascha (and every other occasion they could think of/invent).

In fact, the more I did research, and the more I talked to Charlotte, some of Charlotte’s friends, and my college roommate and her family who had become Orthodox a couple of years after our graduation, I started to see how large gatherings of family, friends, and loved ones were integral to the celebration of the Resurrection.

Suddenly, Catherine’s grandparents stepped forward in my mind, fully formed. I really can’t describe it better than that. Perhaps some other creative people will understand when a character simply “appears” the way they are meant to be. Catherine may never mention them specifically, but I think that’s because them being over for Pascha is just natural in her mind. She assumes that whoever she’s telling her story to would already know that her grandparents would be there. They came over to prepare for Pascha while Catherine is first “resting her eyes”, and they’re there with the girls all the way through Pascha service.

I will admit however, that her aunts, uncles, and cousins are, thus far, lost in the parish crowd. I did have a deadline after all!

Charlotte loved the additions to the family, and they stayed. It just seemed natural that they would be there (and her other set of grandparents, who showed up about a month later also showed up ready to go).

Catherine’s look remained the same, though she gained dark brown hair. I worked a while on what shade of brown eyes she had, and her smile, how did that look. It didn’t take long; Catherine’s look settled quickly.

Mom’s hair went from red to a dark brown too, and her dress and scarf quickly came together, but her expression and overall face took a while. While the grandparents may have quickly and helpfully appeared fully formed, Dad and Mom took a couple of months. Months I didn’t have. Which partially explains why, Thanksgiving 2014, I was parked on the couch, frantically finishing a spread which had been the first one I’d laid out. By then, Catherine’s mother, father, and Elizabeth had finally revealed themselves.

But that’s a story for another time.

St. Mark’s Day: Winged Lions and Roses: Catherine’s dad is named Mark, and her mother is Cecilia. That doesn’t come up in the books. But it’s part of the backstory that the author and illustrator know about their characters. And now you can know it, too.

Why I wrote The Saint Nicholas Day Snow: Partly, I just adore St. Nicholas. And partly, I wanted to get to know Elizabeth better.

17 ways to use Catherine’s Pascha: These book activities will let your children extend the book, and their joy in celebrating Pascha.