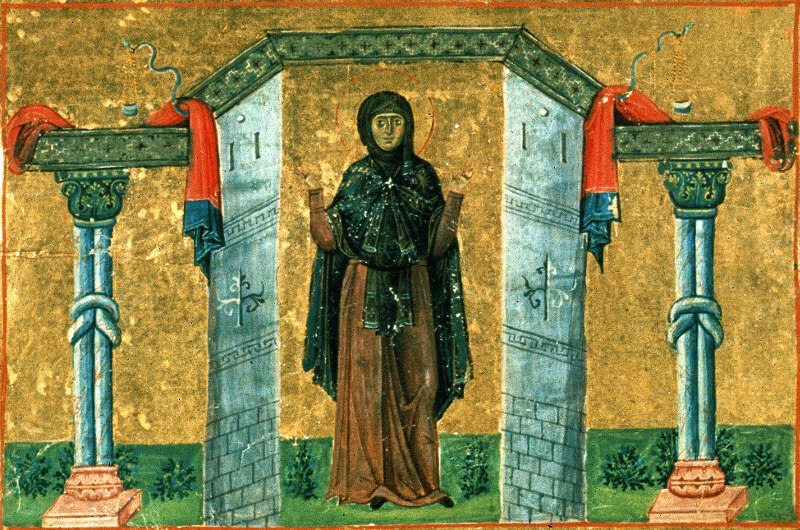 Today is the feastday of St. Melania the Younger. She was named after her grandmother, whose husband and son were both Roman senators. Melania the Elder was also wealthy in her own right, and her charity rivaled that of St. Nicholas of Myra. She supported churches and monasteries, supplied the needs of prisoners, and took care of pilgrims. The stories of her life suggest that she was also a teacher of the faith, leading many to salvation through her wisdom.

Naturally, such a woman had a tremendous impact on her beloved granddaughter. The elder Melania’s generosity didn’t diminish the wealth of her son, and Melania the Younger grew up with vast wealth. For her, that was a problem. She wanted to become a nun, but she was an only child. Her parents insisted that she marry, so that there would be someone to inherit their fortune.

When Melania was 14 years old, she was married to a young man named Apinianus. He came from an important family, and adored Melania. But she didn’t want him. She begged him to either live with her as with a sister, or to abandon her and take another wife. She offered to give him everything she owned, slaves and servants, gold and jewels, if he’d just let her be.

But the deal when they married was to produce heirs. He told her that, once they had an heir, they would enter into the type of life that she desired.

While Melania wasn’t delighted with that, she assented. She soon had a daughter, and not much after that, she had a son. But the delivery of the son was complicated; he died at birth, and it looked as though she might die from the birth. Her husband went to church and prayed for her, and while at the church vowed that, if she lived, they would henceforth live as fellow monastics, and not as husband and wife.

That probably seemed safe to him, because they had a daughter to inherit their wealth. But not long after their son died, their daughter died also. And Apinianus and Melania became utterly resolved to renouncing the world and taking up a monastic calling. But Melania’s father objected, and given his power and position, that seemed to be an insurmountable obstacle to their desires.

They talked about leaving the country secretly, but before they could work out how to do that, Melania’s father died. So Apinianus and Melania set out to give away everything they owned, so that they could take up life as monastics.

How Can Anyone Be So Rich?

Melania the Elder hadn’t diminished her wealth by her great generosity. That turned out to be a bit of a problem for Melania the Younger. Melania’s wealth was so great that giving away everything seemed to be almost impossible.

Melania and Apinianus were the wealthiest couple in the Empire, owning not just estates, but whole villages and towns. They had to get imperial permission to divest themselves of some of their lands. And once they had permission, they still had to have buyers. Their home in Rome was so expensive, they couldn’t find anyone who could afford to buy it at a fair price. As it happened, the home was damaged in a fire, lowering the value to the point that they could sell it.

The money from the sale of the house in Rome and Melania’s other properties went to monasteries and convents, hostels and hospitals. Melania and Apinianus built churches, and furnished still more churches with gold and silver for the altars and vestments for the priests. They bought deserted islands and built monasteries on them. They ransomed prisoners and supported widows and orphans.

And Melania and Apinianus traveled, partly on pilgrimage, and partly to sell more of Melania’s possessions. Melania’s mother traveled with them. Eventually, the three of them settled in Jerusalem.

People seeking wisdom would come to see Melania, and many of them stayed in the area. They wanted her to become the abbess of a monastery, but she refused. Instead, she continued to teach and to serve and to provide for everyone. Including, always, her beloved husband, now her fellow ascetic.

It was said of them, “Blessed Melania, the Lord’s wise handmaiden, kept a careful watch over both herself and her husband, for she was his teacher and guide, always taking the initiative as she led him on the way of the Lord.”

Her mother died before her, and then Apinianus died. And Melania thought she would soon die. But she lived many more years. She used the last of her wealth to build a proper monastery for those who had settled around her.

And then, when Melania the Younger knew that the time of her death was approaching, she attended Christmas services at the Church of the Nativity in Bethlehem, and she attended services on St. Stephen’s Day at the church that housed his relics. Then she returned home and prepared for her death. Giving a final kiss to those whom she loved, she said her last words: “May the Lord’s will be done.”

St. Irene and the Apples of Paradise: Irene was supposed to marry the empress’s son. But he married someone else, much to her delight.

The Emerald of God, St. Euphrosyne of Alexandria: St. Euphrosene’s father chose a good husband for her, but she didn’t want to marry. Instead, she changed her name and became a monk.

The Story of Peter and Fevronia: Peter was a prince, and Fevronia was a peasant. But somehow they managed to become the patron saints of love and happy marriage.